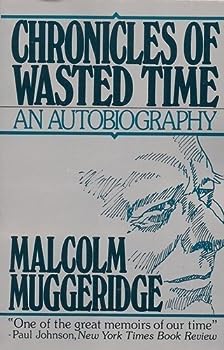 Chronicles of Wasted Time: An Autobiography

Back in print for the first time since Muggeridge's death in 1990, both published volumes of his acclaimed biography-The Green Stick and The Infernal Grove, plus the previously unpublished start to an... This description may be from another edition of this product.

A vivid window into history

Published by Thriftbooks.com User , 13 years ago
I've finally finished Chronicles of Wasted Time by Malcolm Muggeridge. The autobiography consists of two previously published volumes, The Green Stick and The Infernal Grove, as well as the previously unpublished beginning of a third volume, The Right Eye. The writing is superb. Clean, clear, exhilarating. (Although I did notice more typographical errors in the second volume than in the first.) Muggeridge (1903-1990) often references historical works and personalities, which shouldn't be surprising given that he spent most of his working years as a journalist. I was intrigued by how (apparently) easily he moved back and forth between journalism and working in the public sector. One complaint: The chapters are too long, averaging roughly 70 pages each. I assume this is partly why I read the tome slowly. The book was on my to-read list because it's on the Image Journal list. [...]

Published by Thriftbooks.com User , 13 years ago
Endearing portrait of an old crank, a devilish view of ruined idealism and fond memories. Thought provoking, yet faith upholding. Loved it. Read it slowly, not in big bunches.

Publishing Event of the (Last) Century

Published by Thriftbooks.com User , 15 years ago
While I don't claim to have read everything in English, this is the best-written book I've ever read. I remember hoping not to pass on before I'd finished it. Five stars is not enough for this absolutely delightful book, or rather two books. It was originally published in two volumes, "The Green Stick" and "The Infernal Grove", both included here. This is the first edition to include the remnants of the barely-begun third volume, "The Right Eye" (the Chronicles were to have been a trilogy). Thanks to the efforts of the Malcolm Muggeridge Society in London, here are all three (or two and a bit) books together. What's more, the introduction is by Ian Hunter, who penned his own riveting bio of MM, Malcolm Muggeridge: A Life, as well as assembling short bits and shreds from hither and yon in The Very Best of Malcolm Muggeridge. To my view, the Chronicles are the very best of MM. Were he to have some place in the literature of the last century, this is the book that would assure it. Not that he would want a place. He considered himself a journalist, not a writer, or as he loved to quote St. Augustine, "a vendor of words". However, as Ian Hunter reveals, he was not simply an observer but a player on the scene of the most tumultuous century in history. As biographer Richard Ingrams has noted, he seemed to know everyone and be everywhere. In a sense, there was a third book, called Conversion, which appeared instead of The Right Eye. It's the only book he wrote after becoming a Roman Catholic in 1982, and appeared with various subtitles. It's not, as one might think, about becoming an RC, although it does cover that. Oddly enough it's written in the third person, and subject-wise takes up where his book and TV show, A Third Testament, left off, in chronicling his various inspirations. It's best read after the Chronicles, as he retreads some of the same ground, commenting and adding anecdotal reflections. As much as one would long to read The Right Eye in its entirety, this is all we have. One imagines him reciting that third book somewhere to rollicking applause, for closing this volume one gets the sense that even after a long and prolific life he left us much too soon, and with music still in him.

One of the best biographies of the last century!! Malcolm rocks!

Published by Thriftbooks.com User , 16 years ago
I have only recently discovered Malcolm Muggeridge's writings, and wow! what a man, what an awesome writer! He can make you laugh, cry, and scream all in the same paragraph. I could not put this book down, even though at first it seemed way too long. Every page was crisp with details of a fascinating life! Truly an inspiring, unforgettable memoir.

Published by Thriftbooks.com User , 21 years ago
For those who don't know, Muggeridge was a British journalist - editor of Punch, television journalist, etc. He was raised among some of the most "forward thinking" (an ironic phrase) socialist minded, trendy (naturist, vegetarian, etc.) people in London - very much a Fabian set. In his 30s, after he had been a policeman in India and a journalist in the U.S.S.R., he underwent an awakening to the fraud in much of the "progressive thinking" with which he had been inculcated and by which was completely adopted by all his right-thinking journalistic and political circles. He underwent a religious conversion to a high Anglican church (I think - or is it Catholic?) belief - it was later he who publicized Mother Theresa to the world. He is quite moving in describing his religious beliefs and is among the finest prose writers I've ever read - shockingly out of synch with secular modern ideas, and truly an original. He's terribly funny in his tales of the absurdity of Emperor without Clothes leaders and thinkers of the 20th century - particularly those who believe that collective policies by governments can improve mankind. He is as humorously cynical about man and his pathetic attempts to "improve himself" as anyone you'll ever read. He is also truly a fantastic prose writer - these two successive volumes in one are beautifully written and moving.
Trustpilot
Copyright © 2022 Thriftbooks.com Terms of Use | Privacy Policy | Do Not Sell or Share My Personal Information | Accessibility Statement
ThriftBooks® and the ThriftBooks® logo are registered trademarks of Thrift Books Global, LLC