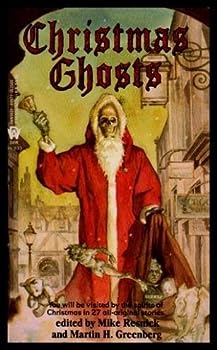 Twenty-seven original stories, written by such noted science fiction writers as Mercedes Lackey, Judith Tarr, David Gerrold, and Kristine Kathryn Rusch, celebrate the yuletide season. Original. This description may be from another edition of this product.

Published by Thriftbooks.com User , 13 years ago
Everybody has their Christmas traditions, one of mine has been reading these stories every year since 1993 when the book was published. If you enjoy reading science fiction fantasy short stories, this is a wonderful collection of 27 stories with a Christmas theme. The ghosts in these stories aren't always "ghosts", sometimes they are angels, childhood selves, people pretending to be ghosts, or in the case of one of my favorite stories, a computer hologram. Many of the stories are original and unique, but many also are also expansions or variations of "A Christmas Carol" by Charles Dickens or other traditional Christmas stories. I know how much I appreciate when someone has given a synopsis of the different stories in a collection, so here's my attempt to pass that kindness on without giving away too much of the plots. Hunger by Michelle Sagara: a man is haunted every Christmas for 12 days by a small girl's ghost begging to being to be fed. Merry Christmas No. 30267 by Frank M. Robinson: a man can't change his future because he won't repent his past. The One That Got Away by Mark Aronson: the events the Ghost of Christmas Past shows to Scrooge are actually quite different than the Ghost thought they were. Elephantoms by Lawrence Schimel: how the ivory, which was one of the gifts given as a gift by one of the 3 wise men to the baby Jesus, was obtained. This story did upset me and it's why, in part, I contribute to The Elephant Sanctuary of Hohenwald, Tennessee. A Foreigner's Christmas in China by Maureen F. McHugh: reprinted in other anthologies, a Christmas Spirit helps a depressed and homesick woman. Upon A Midnight Dreary by Laura Resnick: the angel Gabriel helps a screenwriter to retell the birth of Christ for a Christmas television special. Modern Mansions by Barbara Delaplace: a Christmas Ghost gives an android servant a gift of choice. Cadenza by Terry McGarry: a woman, who loved to sing, adds her voice to a Christmas choir. Gordian Angel by Jack Nemersheim: an unsettling story about two runaway children and the Ghost of Christmas Present. The Timbrel Sound of Darkness by Kathe Koja and Barry N. Malzberg: a ghost foretells the future for Arthur Sullivan of Gilbert and Sullivan. A Prophet for Chanukah by Deborah J. Wunder: the story of Chanukah and its traditions are shown to a young woman. Dumb Feast by Mercedes Lackey: a man grieving his late wife prepares a very special feast so he can see her again. Shades of Light and Darkness by Josepha Serman: in a final fight against an evil creature of darkness, a village's ghostly protector is aided by a young woman who's fallen in love with him. The River Lethe is Made of Tears by John Betancourt: a man who's lost his younger brother is helped with his grief and learns he'll never be alone. Absent Friends by Martha Soukup: a sad story of a man dying of AIDS who is visited at Christmas by old friends. Perestes by Nicholas A. Dichario: The Ghost of Christmas Presents helps a man
Copyright © 2022 Thriftbooks.com Terms of Use | Privacy Policy | Do Not Sell My Personal Information | Accessibility Statement
ThriftBooks® and the ThriftBooks® logo are registered trademarks of Thrift Books Global, LLC