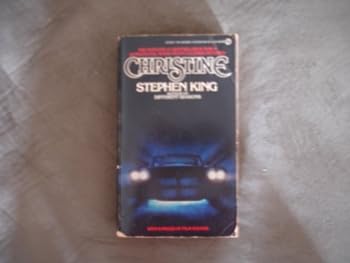 This description may be from another edition of this product. Master storyteller Stephen King presents the classic #1 national bestseller of the ultimate vehicle of terror "This is the story of a lover's triangle...It was bad from the start. And it got worse in...

Published by Granillo , 7 months ago
Very good condition is a lie, got the book and every single page had writing on it. Somebody underlined every single sentence in book and front page was ripped. Do not trust this site.

Published by Ihatescammers , 1 year ago
Christine is awesome but this seller is a scammer, it showed it with a dust jacket but came without one. Now I have to give this book out for free.

Published by Carissa42977 , 1 year ago
The book was okay, I was hoping for something a little scarier. It's about a teen who buys an old clunker and ends up being "possessed" by the original owner. He switches back in forth in time while driving Christine from present day to when the previous owner drove it. The car holds some pretty evil secrets and the book was good. I probably would have liked it better if Christine wasnt a car I think. Its definetly not one of Stephen Kings best in my eyes, but its definetly worth reading.

Stephen King takes you on a scary ride!

Published by Horror crazy , 1 year ago
Readers who love reading Stephen King’s horror fiction will not be disappointed with this book! The King of Horror lives up to his reputation with this classic nightmare about Arnie Cunningham, whose dream car, a ‘58 Plymouth Fury, is not an ordinary vehicle! As his friend, Dennis, soon learns, the devil is in the details. Arnie first “meets” Christine, the classic red car he falls for, in an old junkyard, where the car’s original owner offers to sell him the car. The automobile doesn’t start out looking like the car of anyone’s dreams, least of all the cherry car that any lover of antique cars would love to own. But Arnie’s persistence in restoring the vehicle pays off and, before long, the car looks like “she” just came off of the assembly line. But when she starts killing Arnie’s enemies one by one, including high school bullies, even Arnie himself knows something is wrong. But Arnie really is in love with Christine. It’s up to Dennis and Arnie’s teen queen girlfriend, Leigh, to save Arnie, who is going through some bizarre, subtle, frightening changes in personality, attitude, and appearance, as if he is being possessed by whatever force possesses the car. But what supernatural force is it that possesses Christine, that gives the car a sinister life of her own? Is it the malevolent spirit of her former owner... or something else? Stephen King serves up the kind of gory, suspenseful horror his fans relish, with a supernatural premise that many of his fans will find irresistible! I’m a big fan of Stephen King and, while Misery and Cujo are two of my favorite horror novels from the author, I love supernatural horror tales from any genre writer, including Bentley Little, Dean Koontz, John Farris, and others. So, I, of course, love Stephen King’s supernatural chillers! In fact, I highly recommend Pet Sematary and The Shining every bit as much as I recommend this shocker, whether or not you’ve read the sequel to The Shining, Doctor Sleep! If you’re a huge fan of Stephen King’s supernatural horror stories, and you’re also a fan of some of his older books, don’t miss Christine!👍🏻👍🏻

Published by Unhappy , 2 years ago
When I received the book it was filthy. No jacket cover and the inside pages were covered in stains. It went right into the recycling bin.

Not happy at all!!

Published by Denise L , 2 years ago
Book was advertised with a jacket cover, but didn’t have one when I received it. The pages were obviously water damaged and heavily nicotene stained. Will not order from here again.

Published by Thriftbooks.com User , 12 years ago
This book by stephen king will not let you down in the horror category. This killer car is out for blood and the build up to the climax is masterfully written by king. I recommend anyone who looked at the movie without reading the book get a copy and see what they missed. This is horror at it's v8 powered best.

Published by Thriftbooks.com User , 13 years ago
I have read a good amount of books first off, but have never actually read a Stephen King book to this point in my life, which I figured was something I should do eventually. I believe that the book has an excellent premise and for the most part a compelling story line. But the story in my opinion and forgive me for doing this is kind of like a Ford Fury, it's kind of built solidly with a huge engine but it handles pretty miserably. Like I said the drive behind the story of a good kid obsessed with a car that then becomes obsessed with demons is pretty good, but at just about every turn in the story King uses the easiest most cliche story possible to keep the novel going, which is fine to a degree. The writing in these areas is often lazy and about as cliche as the school bullying and Leigh has got to be the lamest female character, even lamer than the unnamed cheerleader. I guess I have a preference for somewhat more refined writing than this, but he cares so little about abusing cliches that it's actually hilarious at points, maybe this is his style. At page 300 I got sick of it though to be honest, because the story was cruising right down main street and I felt like the book had become the car. And I was just reading to find out who the car would kill next, which got boring It really wasn't all that exciting as the concept of the story, because I didn't feel like putting all that effort into something so lazily written. So I just skipped to the end, which was satisfying to a degree. All in all this was a good book with a stronger concept than Snakes on a Plane, and much better writing, and character development. Everything was always though like how can the author take the easiest way to keep you reading as possible, with a joke hear, a cliche voice there, and a cliche cop, and a tearjerking scene there with stereotypical character here and there, and eventually you find yourself liking the car better than the people. It seems kind of cynical which is why I give 4 stars.

Published by Thriftbooks.com User , 15 years ago
This book about a killer car is the best Stephen King book I have ever read. I loved the movie too (though at some points it did stray a bit far from the book, and infact it removed the whole ghost plot and changed the ending and a remake would not hurt). If you have not seen it, I will not spoil anything more than what I have already written. Give this great read a try.

Published by Thriftbooks.com User , 20 years ago
Yes, this is one of King's best. Christine seethes with teenage angst, first love, dysfunctional family life, and of course, Christine, that witch on wheels. Was there ever a more creepy and original monster? I had shied away from reading this one for a long time because I thought it would be silly. And I never saw the movie for the same reason (I mean, remember Cujo?!) Anyway I finally caught the movie one day on TV and watched it from the beginning, and whoa... I did like it. The actor who played Arnie was awesome, whoever the heck he is. So I ordered the book. I was glued to it. The characters were so engaging and real, King at his best. The kids, Arnie and Dennis and their friendship which becomes strained as Arnie goes from geeky to freaky - very well written. Arnie's infatuation then obsession with Christine which changes his whole personality is extremely well-done, and the resulting tragedies - well they're horrible (duh, that's part of the reason I read King's books.) To be horrified and creeped out while King's stories have you in their intense grip - delicious! So after all, the book isn't really about the death-car. It's about a tortured kid who loses it, and his friends and family who can't save him, just like real-life.

Published by Thriftbooks.com User , 21 years ago
The two strongest things in Stephen King's writing are his storytelling and his ability to craft vivid, believable characters. This book is a prime example of both of these talents. It is the story of Arnie and Dennis, two high school seniors who have been friends since they were five years old. Arnie has always been the "outcast" kid in school and Dennis has stood up for him countless times. That friendship is put to the test when Arnie falls in love with Christine, a 1958 Plymouth Fury in desperate need of restoration. The purchase of the car puts a strain on Arnie's relationship with everyone around him, including Dennis. Their friendship was, in my opinion, the central theme in the book, rather than the supernatural events surrounding Christine. Those could have been removed entirely from the book and the power of the friendship would still be there. The story wouldn't be quite as gripping and it wouldn't truly be Stephen King, but it would still be a very good read.The first and third parts of the book were told in the first person narrative from Dennis' point of view. This made for very powerful reading. King manages to tweak the readers feelings in exactly the way he wants by doing this. When Dennis ends up in the hospital for a couple months with a football injury, the narration changes to third person for the middle third. Although not quite as emotionally powerful as the first and third parts, this section of the book is meaty in its own way. We see Arnie changing from the shy, "loner" character from the first part into the nearly unlikeable character in the third part.I think this book has the most depressing ending of all of Stephen King's books (at least of the ones I've read). The reason for this is the fact that he makes you care for the characters. The reader wants everything to turn out okay for everybody. King had no compunction whatsoever about doing things to his characters. If he'd tied it up in a sappy, "everything's okay" ending, it might not have been as powerful. Less depressing, but less powerful nonetheless. This book has jumped to near the top of the list of my favorite Stephen King books. Highly recommended.

Christine Mentions in Our Blog