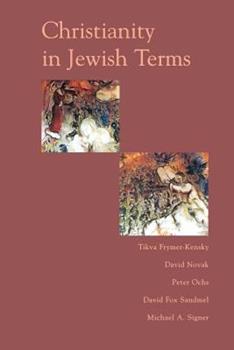 Over the past few decades, there has been a dramatic and unprecedented shift in Jewish -- Christian relations, including signs of a new, improved Christian attitude towards Jews. Christianity in Jewish Terms is a Jewish theological response to the profound changes that have taken place in Christian thought. The book is divided into ten chapters, each of which features a main essay, written by a Jewish scholar, that explores the meaning of a set of...

Published by Thriftbooks.com User , 18 years ago
This is a very provacative and timely book. It's sure to upset many but it may also do some good in getting both Jews and Christians to acknowledge the overlaps in their traditions. If only Muslims would read this book! They too would have something to learn!

Read this if you don't read anything else!

Published by Thriftbooks.com User , 20 years ago
This is one of the most important books available, not just for those already initiated into J/C relations. Every Christan Pastor in every denomination needs to use this book as a new source of balance as they attempt to nourish their congregations in an accurate understanding of God, scripture, and a host of other central faith topics, note the word "central."The light that eminates from this collection of writings is profound. This balance is what you will not recieve in Seminary training, except from a very few knowledgable educators. The Christian world must listen, and this book is one of the most important collective "voices" to hear from.

Toward Understanding, Respect, and Reconciliation

Published by Thriftbooks.com User , 20 years ago
In September 2000 at the time of the Jewish High Holidays, the editors of this book published a statement in the New York Times titled, "A Jewish Statement on Christians and Christianity." The statement recounted how, in the years following the Holocaust, Christian denominations had expressed sorrow over the Holocaust and over Christian anti-semitism over the ages. The editors believed these outreach and healing efforts by Christians merited "a thoughtful Jewish response" and an attempt by Jewish people to rethink and reconsider their own attitudes to Christianity. They offered eight statements in an attempt to show common grounds for understanding and respect between Jews and Christians.This book is an outgrowth of the initial statement of September, 2000. The editiors are part of an organization known as the Institute for Christian and Jewish Studies, an organization composed of both Christian and Jewish scholars, with the goal of promoting Jewish-Christian understanding.The goals of the Statement, the Institute, and this Book are of great importance and worth. The effort which is undertaken in this book (which, as the editors indicate as hardly a new one)should continue to the benefit of both Jews and Christians.This book is structured essentially as a conversation among Jewish and Christian scholars. Following the Statement and two introductory essays, the book is organized by topic. There is an initial essay on the topic by a Jewish writer followed by two essays, one by by a Jewish writer the other by a Christian writer. The topics chosen for discussion are serious and important for inter-faith understanding and include the Holocaust, concepts of God, Scripture, commandment, the place of Israel, the nature of prayer, the attitutes of Jews and Christians towards suffering, incarnation, redemption, and sin and repentance. There is also a discussion of the meanings each faith finds in the Biblical statement that man is created in the image of God.These writers treat theses topics with respect, with humility and with depth. One can only be awed by the complexity of the teachings included in each tradition and by the learning shown by the participants in this venture. The essays will teach readers the complexity of the tradition of which they are a part as well as suggesting the overlaps with the sister tradition, the possible agreements, and the core of areas in which Judaism and Christianity simply differ.As would be expected, the essays are not of uniform quality. In some instances, I thought the writers got sidetracked into discussions of matters such as political activism and feminism which, to me, detract and don't add from the questions Jews and Christians need to discuss one to another. Also, although there is some discussion of Kabbalistic themes in Judaism and attempts to relate these themes to Christianity, the book could have used much more. I think there is room for discussion of how the contemplative tradition in each f

A model for authentic Jewish-Christian dialogue

Published by Thriftbooks.com User , 21 years ago
I wish I could give this book six stars. I can't remember the last time a work of Jewish-Christian dialogue seized my mind, challenged me, and opened up new avenues to understanding. It's a series of essays penned by Jewish scholars, each of which is followed by a pair of response-essays, one by another Jewish specialist, the other by a Christian. Topics include the law and ethics, salvation history and covenantal pluralism, liturgy and worship, suffering and martyrdom, incarnation theology, and redemption -- all explicated in Jewish and Christian terms, but with a focus on Jewish origins.All contributors (thirty-two, by my count) steer clear of the common errors which poison religious dialogue: triumphalism, proselytization, syncretism, relativism. (1) Triumphalists believe that no commonalities can be found between the two religions, Jews claiming that Christianity is a deviant form of its parent faith, Christians that Judaism was only a precursor to (and is now superseded by) its successor faith. The authors affirm many commonalities between the two religions, and that denying them is as much a distortion of one as the other. (2) Proselytizers use Jewish-Christian dialogue as a venue by which to persuade the other side to "convert". The authors, while allowing that either side might naturally wish for the conversion of others, do not approve of using dialogue to realize this hope. (3) Syncretists attempt to construct a new religious reality out of various elements of Judaism and Christianity. The authors reject this as idolatrous and trivializing. (4) Relativists deny that some things are true everywhere for everyone. The authors, while recognizing commonalities between the two religions, also know that the ultimate truth claims of Judaism and Christianity are different and thus mutually exclusive.The dynamic interactions throughout this book show that authentic Jewish-Christian dialogue can succeed without both sides offending the other and (equally important) without both sides becoming one. As an orthodox Jewish theologian puts it, "True dialogue is dialogue that respects difference and is animated by it." This is essential reading material for any who are actively involved in Jewish-Christian relations, or for any who have an abiding interest in the Jewish origins of Christianity.

Jewish rabbis/scholars reach out to Christians

Published by Thriftbooks.com User , 21 years ago
Rabbi Neusner once told me, "Only brothers can have such a prolonged and passionate fight." The brothers are the synagogue and the church. In times past, it has been dangerous for Jews to discuss Christianity. In times past, it has been dangerous for Chrsitians to do anything but to blame Jews (for an earthquake, for a plague, for economic difficulties, for the death of Jesus). Now things are turning around. Rabbi Isaac Wise of Cincinnati was the first to break the silence in 1918 (?) by publishing a book devoted to exploring what the Christian scriptures say about Jesus. In Cincinnati, the synagogue faces the catedral church immediately acrosss the street. One can go across the street and meet Jews and to listen to their pain. . . .Now a big step forward. On Rosh Hashanah (30 Sept 2000), 170 rabbis and scholars released a thoughtful statement about how Jews can come to grips with Christianity. The public statement was entitled DABRU EMET ("Speak the Truth"). This statement deserves attention by Jews searching for a voice with which to address their Christian neighbors. But, with even more importance, this statement deserves attention by Christians who would want to better understand how and why Jews have not converted and are waiting and searching for God's truth.The book, CHRISTIANITY IN JEWISH TIMES, allows the framers of this document to explore their statement and invites Christians to respond. So, the dialogue has begun at last. . . .
Trustpilot
Copyright © 2022 Thriftbooks.com Terms of Use | Privacy Policy | Do Not Sell My Personal Information | Accessibility Statement
ThriftBooks® and the ThriftBooks® logo are registered trademarks of Thrift Books Global, LLC