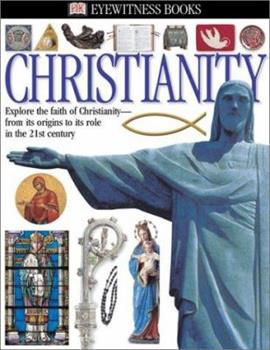 Explore the faith of Christianity - from its origins to its role in the 21st Century. With over 50 million copies sold in 88 countries and in 36 languages, Eyewitness Books are truly the ultimate visual information encyclopedias for the 21st Century. Carrying on the tradition of integrating words and pictures, these three new titles in the Eyewitness series are timely editions to any library.

From Origins to 21st Century

Published by Thriftbooks.com User , 11 years ago
The Bible's first 5 books are the Jewish Torah. The four gospels are Matthew, Mark, Luke and John. Christ was born in Bethleham. Christians believe that Jesus was God's son. Jesus' ministry lasted 3 years. Jesus used parables to teach. He was sentenced to death on the cross, thus giving his followers eternal life. The third day he rose from the dead. His followers continued to preach. The Bible is composed of over 60 books written over centuries. The New Testament deals with Jesus and his followers. It has been translated into modern languages. Monks translated it into Latin. Heaven is the gift of eternal life, while Hell is eternal torment. Catholics are expected to go to Mass every Sunday. It is led by the Pope. The current Pope is Benedict XVI. The heirarchy of clergy are archbishops, bishops and priests. Martin Luther challenged a corrupt Catholic church in the 15th century. Protestant churches baptize those who are of age. Monks and nuns take vows of celebacy and/or poverty. The communion is important. Baptism enters one into the church. confirmation confirms their faith. Marriage is a couple united in the church. Funerals are when a person dies.

Published by Thriftbooks.com User , 13 years ago
This is a nice book that teaches about Christianity without bias. It covers most forms of the religion and how the practices and beliefs are similar and different. I learned things about Christianity in this book! I am an ESOL teacher so it is good for my students to learn about different religions as well as Christianity. They are often not Christian but are exposed to the practices and beliefs when interacting with their classmates, neighbors and American culture in general. A very good book.

Published by Thriftbooks.com User , 13 years ago
I've been a fan of the Eyewitness Books series for years . With titles ranging from Africa, American Revolution through Weather, World War II and everything in between Bird (DK Eyewitness Books),Great Scientists (DK Eyewitness Books), Universe (DK Eyewitness Books), the books take complex topics and make them understandable. The variety of topics goes from the arts to historical events and all phases of life on the planet and universe. This particular book on Christianity is beautiful for the young reader or adult who wants a quick lesson. The depth and clarity with which such a broad topic as Christianity is covered makes for interesting and educational reading for all ages, not just young readers. Another selling point is the beautiful illustrations, which are often of a historical nature, actual photographs or recreated colorful pictures of artifacts. It is amazing that the subject of Christianity can even be covered within seventy-five pages. Especially when you take into consideration that each page has multiple photographs. On any given page, three to five photogrpahs will illuminate the paragraph that addresses the given topic. The book begins with In the beginning(Old Testament, Adam & Eve etc.),followed by the birth of Christ and the aftermath that includes Catholism, The Orthodox Church, The Reformation, Protestanism etc. and many things related to Christian culture. The book also suggests further aids in the study of Chriatianity, including useful web sites, places to visit and a glossary. This book is highly recommended for young students. Students whose first language is not English will also benefit because of the eye catching photogrphs. These in turn can be supplemented by the parent or teachers help with the text. Recommended for K-12 school libraries, as well as community libraries, for an understanding of one of the great religions of the world.

Excellent Tour for the Uninitiated

Published by Thriftbooks.com User , 15 years ago
This was a great followup to the DK Religions book, providing the usual customs and major Biblical sitings outlined in other references. What was pivotal to a nonWestern religious family was the way DK separated the factions, evolution, and frank comparisons (e.g., "Orthodox are the closest to the practices that Jesus followed in his day") that are not evident to even practitioners. This is an important look into Chritianity for both Christians and nonChristians, and hopefully, the beginning of exploration into learning about other World Religions. Read on! We recommend the DK Buddhism edition as well.

A gloriously illustrated introduction to Christianity

Published by Thriftbooks.com User , 18 years ago
The chief charm of the volumes in the DK Eyewitness Books series are the color photographs that accompany the text in each double-page spread. For example, the section on the Resurrection offers a set of three 15th-century Italian paintings showing Jesus rising from the tomb, the empty tomb, and Mary Magdalene looking for Jesus' body; a photograph of an arcosolium, a tomb probably similar to the one in which Jesus is buried; an illustration from a 15th-century Italian Bible of the Last Supper; a mural of Doubting Thomas from a 13th-century Serbian church; a 12th-century stone relief from a Spanish abbey; and a silver and jewel encrusted empty cross with paintings of the authors of the four Gospels at each end. On other pages you will find Handel's original score of the "Messiah," Gutenberg's printing press, a model of the "Mayflower," the inner and outer cases for the relics of Saint Eustace, and Chinese illustrations of the parable of the Lost Son. The volume is organized into roughly three main sections. The first touches on the Old Testament and then covers the birth, teachings, Crucifixion, and Resurrection of Jesus. The second looks a the history of the early Christian church, the Bible, the concepts of heaven and hell, and organized religion in terms of Catholicism, the Orthodox church, the Reformation, and Protestantism. The third section deals with the Christian life, as lived by monks, nuns, and priests; Christian churches; a step by step look at the sacrament of Holy Communion and other aspects of Christian practice and culture. From the standpoint of providing information on the topic of Christianityt Peter Wilkinson goes for breadth rather than depth, which is appropriate for an introductory volume such as this one. The previous volume in this series covered Islam, and I think you will find both books are comparable in providing those who know little about each subject with a satisfactory introduction. Those raised in either faith should be able to enjoy the beautiful photographs of art, artifacts, and architecture.
Copyright © 2020 Thriftbooks.com Terms of Use | Privacy Policy | Do Not Sell My Personal Information | Accessibility Statement
ThriftBooks® and the ThriftBooks® logo are registered trademarks of Thrift Books Global, LLC