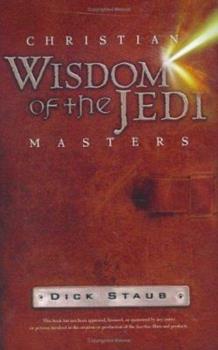 Christian Wisdom of the Jedi Masters

Written by award-winning radio personality Dick Staub, this compelling book is filled with anecdotes from the Star Wars films that serve as a launching pad into rediscovering authentic Christianity. Christian Wisdom of the Jedi Masters also contains quotes from revered "Jedi Christians" such as Thomas Merton, Teresa of Avila, the Apostle Paul, G. K. Chesterton, and other theologians, mystics, writers, and philosophers. The author sheds new light on...

Published by Thriftbooks.com User , 14 years ago
What a fascinating book! One of the first concerns that any Christian will present (and understandably so) is: "Isn't it dangerous to mix the eastern mysticism of Star Wars with the Bible?" Let me put this to rest, the author does not interwine the "force" with the Bible. Merely he takes time to pull out some spiritual truths that do align with scripture and elaborate. In the same way someone might quote non-christian authors/poets (example: The Apostle Paul quoted Epimenides - Titus 1:12-13) in a Christian book to explain some spiritual truth. As someone who studies Theology and is conservative, this book is doctrinally sound in it's approach. With that aside, this book reads like a devotional. You can read one small section at a time and stretch it out over a month or so. However, personally I could not read one at a time, I devoured the book within a week. I highly recommend to any Christian who is also a Star Wars fan.

Published by Thriftbooks.com User , 17 years ago
Excellent! Practical! A Rare Find On Today's Bookshelves!! Storytelling is the oldest form of passing wisdom from one generation to the next. The elder tells the story of his experiences, weaving in lessons he has gleaned. While the younger listens, the story becomes part of his/her mental landscape. Then when a similar situation arises, VOILA! The story is remembered by the youth.... and the lesson is applied. Dick Staub is the consummate teacher/mentor in Wisdom of the Jedi. With a heart longing to reach the younger generation, he forges powerful metaphors and analogies from Star Wars for a generation who finds itself in an abyss of society's smorgasbord of sense overload and material possessions. Today there is much talk of one's "spiritual journey" or "path", but not much evidence of radical transformation. Christianity `lite' doesn't seem to have questions about God......No Holy Mystery......No Awe.....just answers in fill in the blank Bible studies or in systematic theology. Staub challenges the average Christian with Star Wars metaphors offering transformation, hope, and a sense of meaning. Those who choose to look at their relationship with God through the Star Wars lens will glean unexpected riches....and will finish the book with an excited mind and spirit. Each generation has to discover God for itself. If Dick Staub had lived 100 years ago, he would have been an old man in the chimney corner passing down the faith through creative storytelling..as he urged young listeners to co-create with their Creator. Go buy the book. It pierces the soul with laserlike precision and makes everything else, except being a follower of Jesus Christ, as exciting as a dial tone! May the Creator of the Force be with you. Sharon Newman Bordine, Ph.D. NASA Teacher in Space representative

A Fabulous Swim Outside the Mainstream...

Published by Thriftbooks.com User , 17 years ago
This book is perfect for anyone tired of walking through their Christian bookstores and seeing the same things from the same authors with only title and cover art changes. Staub takes the reader on a simple, yet profound journey through the "trials" of spiritual development. Truth be told, only a very minimal amount of Star Wars background is needed; however, I would recommend that a reader have already begun the Christian journey to appreciate the book at its deepest levels. Striking about this book over so many other "sanctioned" (and often sanitized) Christian media output, is that this book is oozing with experiential wisdom which both reflects and inspires. Rather than presenting logical, factual, left-brain diatribes about how important it is to become a "spiritual master," Staub concentrates his writing on connection, relationship, meditation, and the journey of Christian faith. In short, while other books are factoids about the "ends" of faith, Christian Wisdom of the Jedi Masters is a book about the "means." I connected with its simplicity very deeply as a pastor and a Christian of almost 30 years, but the book is suited for anyone on the Christian journey. I believe Staub has articulated very well the "one true myth" without railroading the Star Wars universe with triviality or Christian white-washing. I rarely ever write reviews of a books (I think this is my second in 10 years) though I've read hundreds of theological works and "pop" Christian antiseptic self-helps. But this book was worth 10 minutes of my time to convey to anyone out there who may be uncertain: it is a five star read. Simple, yes. Profound, for sure. Isn't that what Wisdom is supposed to be?

Dick Staub has done it again!

Published by Thriftbooks.com User , 17 years ago
One of our keenest Christian culture watchers, Staub enables the readers of his latest book to examine what C.S. Lewis called "mere Christianity" through the lens of the Star Wars myth. By aligning his tome with a popular series of films, Staub has opened himself to a barrage of inane criticism from both narrow-minded Christians and their mirror images; reactionary secular film purists. But the author is only doing what generations of the faithful have always done; relating the old, old story of the "one true myth" (Lewis) to a contemporary audience in language and imagery they can understand. FUNDAMENTALISTS TAKE NOTICE: Staub is NOT saying that the Star Wars franchise is a Christian film series, that George Lucas is a closet believer, or that Yoda graduated from Bob Jones University! Once again, he is simply presenting "the faith that was once for all entrusted to the saints" (Jude 1:3) in a form a large segment of our society can relate to, without out distorting the Christian message and worldview in the process. One other point needs to be made here. This book should not be passed up by Christians who are not Star Wars fans. Staub's writing is clear, rich, and highly quotable. His citations of a vast array of writers and thinkers are enlightening. His challenges are (sometimes painfully) penetrating. In addition, 'Christian Wisdom of the Jedi Masters' is a model of cross-cultural communication at its best. Get this book. Read it. Think about it. Give it to your friends.

Published by Thriftbooks.com User , 17 years ago
This is an outstanding book. Next generation and baby-boomers alike will resonate with the challenging truths of Christian Wisdom of the Jedi Masters. Staub gracefully uses the Star Wars theme to connect with readers while staying true to the real source of truth. Some readers might think this is an attempt to draw a close link between Star Wars and biblical themes. What Staub does in creative ingenuity is take the familiar and often culturally ingrained themes and dialog of Star Wars and uses them as an entry point to discussing real truth. To think this book is primarily about connecting Christianity to Star Wars or comparing the two side by side misses the point altogether. Those connected with today's youth know that kids are searching for the truth because they haven't had a real role model either in their parents or other adults who not only speak the truth, but live it out as well. This book is a challenge to those of us who can be mentors to get down to the heart of the matter when it comes to spiritual growth and be a mentor to those who need it. It's also a challenge to those who need a mentor to seek the truth themselves and look for someone who can help guide them in their spiritual journey. This book is an encouragement to both audiences. Anyone on a spiritual quest will want to dig into each chapter and discover not only the basics but go deeper in true faith. This book can significantly touch and change the lives of those who read it.
Trustpilot
Copyright © 2022 Thriftbooks.com Terms of Use | Privacy Policy | Do Not Sell or Share My Personal Information | Accessibility Statement
ThriftBooks® and the ThriftBooks® logo are registered trademarks of Thrift Books Global, LLC