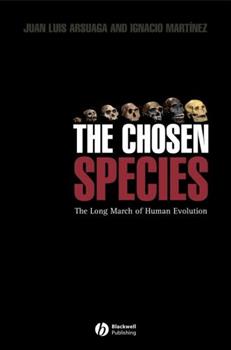 This engaging book tells the story of human evolution, asking if man is indeed the "chosen species" or merely an evolutionary accident. Written by world-renowned paleoanthropologists who are co-directors of the excavations at Atapuerca---a World Heritage Site and Europe's oldest known burial site---where a new human species, homo antecessor , was discovered Discusses various hypotheses of human evolution, drawing conclusions from verifiable facts...

Published by Thriftbooks.com User , 17 years ago
It is all but impossible for us to believe that we live in anything but a Homo-centric world. Even the most ardent supporter of evolution tends to think of us as being the last of a long, long line of development. But even with that, there's a general feeling that we are the best and the brightest, hence the title. This book traces human evolution beginning with the primates and covers the differences between the 300 or so other members and the humans. The book is based on the so called neo-Darwinism theory that began to be developed in the 1940's. This theory combines traditional Darwinian theory with more recent advances in genetics and other areas of biology. This is a beautiful book on just how we came to be. A being here on earth, evolved from our ancestors, but helped along a little by the active role of living organisms in our own evolution. The book is written by two world-renowned paleoanthropologists from the University of Madrid.
Trustpilot
Copyright © 2022 Thriftbooks.com Terms of Use | Privacy Policy | Do Not Sell My Personal Information | Cookie Preferences | Accessibility Statement
ThriftBooks® and the ThriftBooks® logo are registered trademarks of Thrift Books Global, LLC