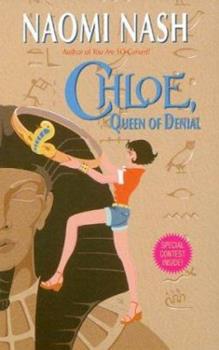 by Alexandra Karina and Naomi Nash

One of two books in which two girls discover an Egyptian archaeological dig is a lot more than surviving blistering heat and scorpions?hot guys, a cursed bracelet, and ancient tombs make it the adventure of a lifetime.

Published by Thriftbooks.com User , 13 years ago
As and adult this was my first Naomi Nash, loved every page of it. My sister and I read this and Eyeliner of the Gods out loud, like we were the characters in the book. It is still one of my favorites and I love reading it time and time again. It's nice and breezy and acts as a great inbetween book for when you just finished one large book and want a break before you start another.

Published by Thriftbooks.com User , 15 years ago
Chloe Bryce is the biggest wimp ever. She's such a scaredy-cat that her family has a nickname for her: Chloe, Queen of Denial. But when she goes to Egypt as part of an excavation team, she is determined to be brave and hide her scaredy-cat past. She's convinced it will work, until she sees Connor, a boy from her high school, there. She's convinced he's going to blow her cover. But then she and Connor hit off, and everything seems to be going well. Except for snotty January James digging through her stuff, the cursed bracelet she can't seem to get rid of, and the secret Connor seems to be keeping from her. Will she be able to keep her cool and stay fearless? This book is quite funny as a self-professed "scaredy-cat" finds her place in a strange land. You can also read Jan's side of the story in Eyeliner of the Gods by Katie Maxwell.

Published by Thriftbooks.com User , 16 years ago
It's a while since I read this book, but I found it amusing and also enjoyed the details about archaeology and Egypt. It fitted in well with other books I've read about digs, but the characters, all rather "out there" kept my attention.

Hilarious Accompaniment to 'Eyeliner of the Gods'

Published by Thriftbooks.com User , 17 years ago
Sixteen-year-old high school sophomore, Chloe Bryce, is absolutely dreading going on this archaeological dig in the middle of the desert. You see, it wasn't her who wanted to go, but rather her Father (Mr. this will look good on your college application), who forced her to pack up her lip gloss and head out to the Sahara Desert, where she will spend a month at the Tombs of Tekhen and Tekhnet. Little did she know that she would have to spend the entire month smelling gross (seeing as you only get to bathe every ten days), and taking the kind of crazy risks that only Indiana Jones would take willingly. Sure, Chloe got to kiss the absolute hottest guy on the dig, but she also had to put up with snotty January James digging through her belongings. Obviously, this is going to be one very long month. Naomi Nash has a wonderful, fresh new writing style that makes the reader feel as if they are reading about their best friend, or even themselves. Her vivid descriptions, and hilarious character commentary keep the story moving quickly, while at the same time forcing the reader to pick up the pace, so as to see what will happen next. Chloe is a brazen, bold character, who easily captures the heart and attention of the reader on the opening page when she defeats a killer scorpion who has slipped into her cot uninvited; and her problems and wonky situations just get better, and more exciting, from there. Overall this is a must-read book for all teenagers. Especially those who enjoyed the prequel EYELINER OF THE GODS, written by Katie Maxwell. Erika Sorocco Book Review Columnist for The Community Bugle Newspaper
Copyright © 2022 Thriftbooks.com Terms of Use | Privacy Policy | Do Not Sell My Personal Information | Accessibility Statement
ThriftBooks® and the ThriftBooks® logo are registered trademarks of Thrift Books Global, LLC