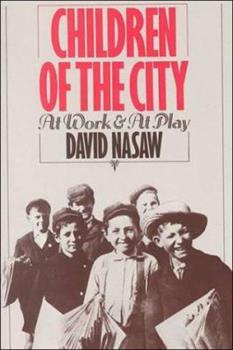 Children of the City: At Work and At Play

The turn of the century was a time of explosive growth for American cities, a time of nascent hopes and apparently limitless possibilities. In Children of the City, David Nasaw re-creates this period in our social history from the vantage point of the children who grew up then. Drawing on hundreds of memoirs, autobiographies, oral histories and unpublished--and until now unexamined--primary source materials from cities across the country, he provides...

Published by Thriftbooks.com User , 15 years ago
This book is one of the few resources for those who want to find out something other then what Teddy Rosevelt did. Honestly I read this at least once a month. Other reviewers say it gave a veiw that the children did not feel they could change things, but they did. He devotes an entire chapter on the newsies strike, and does an unbelivablely good job of showing the fun side of this life that our history teachers and Jacob Riss tell us was horrible. He uses Lewis Hines Photographs in the way they were ment to be, showing the world as it was. Hine did not try and hide the bright smiles and lively pouts of the children, he wanted to show this world as it was. Thorugh wonderful anecdotes from famous people like Groucho Marx Nasaw shows that while the work was hard there was more to gain then just the money. He paints a realistic image of the world that is lost to us now.

Children of the City

Published by Thriftbooks.com User , 16 years ago
In the book Children of the City: At Work and At Play, David Nasaw brings readers into the lives of children all over America at the turn of the century. Nasaw begins by giving us a description of the area in which the children were raised-mentioning the run-down cities and tenements where the working class resided, while also being sure to briefly mention the other half of the population that lived in great wealth. Since there wasn't much room around their houses, most middle class children simply played in the streets-gambling, playing baseball or kick the can, etc. The book discusses in great depth, and with great historical accurateness, what life was like during this time period-the school, the job and the home life. Nasaw paints a picture for us-vividly letting us experience life right along with these children as we turn the pages of his book. I know that prior to this book my knowledge concerning this subject was quite minimal. However, after completing it, I feel much more comfortable with the material. I think Nasaw did a great job of conveying a broad array of information through various statistics, facts, pictures and inserted passages. The book was informative, but somehow not boring. Sometimes, it's hard to find historical books that capture our attention. This was a rare exception-it appeals to our emotions as we read the accounts of rough life that such small children had to face each day. The book Children of the City helps us get to know the children of that age a little better. They lived more then a century before us and experienced life in a completely different realm. This may be hard for us to understand because the way we live our lives is so different-easier in a sense, but harder at the same time.

The Real Lives of Children?

Published by Thriftbooks.com User , 21 years ago
Controversial, yet remarkable look at how young children, primarily boys, resisted and re-made the conditions of their existence in early 20th century U.S. cities. His chronicle of the newsboys' strike is vital history. The book is more controversial when discussing the actions of the so-called 'child-savers,' one of whom actually included social activist photographer Lewis Hine. He dismisses the action of these advocates as puritanical and fundamentally ignorant of the real conditions of the children's lives. He decides that children are neither powerless nor defenseless, and this decision is, of course, a double-edged sword when dealing with the very real abuses of child labor and child exploitation that still pervade the U.S. and the globe.

A must read for "Newsies" fans

Published by Thriftbooks.com User , 22 years ago
Nasaw's _Children of the City_ is a wonderful glimpse into the lives of children at the turn of the century. If you are doing research on the 1899 newsboys' strike, READ THIS BOOK. It is a huge help in understanding why the newsies did what they did.

Published by Thriftbooks.com User , 23 years ago
This book was extreamly good and gave a GREAT picture on what children's lives were like up to the 1920's, and the pictures and facts were INCREDABLE!!! A MUST READ!!!
Copyright © 2020 Thriftbooks.com Terms of Use | Privacy Policy | Do Not Sell My Personal Information | Accessibility Statement
ThriftBooks® and the ThriftBooks® logo are registered trademarks of Thrift Books Global, LLC