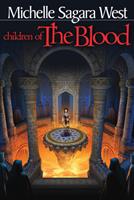 Children of the Blood

(Book #2 in the Books of the Sundered Series)

Continuing the struggle she began in Into the Dark Lands, Erin--newly dubbed Sara--is forcefully put to sleep for 300 years while her Lord finishes overtaking his enemies--and Sara's kinsmen. After conquering and slaughtering the last of the Bright Heart lines, he awakens an amnesia-ridden Sara and assigns one of his slaves, a fellow "child of the blood," to comfort her. As Sara's memory slowly returns and her rage intensifies, the Servants of the...

Sequel to Into the Dark Lands

Published by Thriftbooks.com User , 14 years ago
Second in the Sundered Quadrology, Children of the Blood Begins three hundred years after the end of Into the Dark Lands (Book 1). The last fortress of the Light - Dagothrin - is about to fall. And as Dagothrin falls, Sara lies sleeping, waiting to be wakened. We see the events of Children of the Blood mainly through the eyes of Darin, the last survivor of the line of Culverne. We first meet Darin as a young child, living a relatively carefree life in Dagothrin. Through him we experience the life of the newly enslaved. MSW does not sugar coat his suffering or that of the other slaves. One scene in particular is quite distressing and had me in tears. This part is heartbreaking, bleak and difficult to read. But I think it is important because it illustrates how quickly the Dark can break not only an individual but also a people. Ultimately Darvin is saved when he comes to work at the castle of Lord Darclan (Stefanos). He is put in charge of the care of a young noblewoman who lies sleeping in the castle (Sara). Sara is perhaps the weaker of the three main characters in this story. She believes through much of Children of the Blood, that she is a noblewoman who lost her memory during a boating accident. It's interesting to see the aspects of her character that remain true even though she doesn't know who she is. And to see the spell that Stefanos risked everything to perform slowly unravel. Stefanos I found fascinating. In the three hundred years he has changed. He realizes despite all his machinations his time with Sara is running out and that perhaps he made a mistake, instead of sharing a mortal life with his beloved, he has had no life with her at all. He still has the arrogance all the Servants and Priests of the Dark seem to have - I can't help wondering if that will be their downfall, because they can't conceive they will be defeated. Ironically after the confrontation between Stefanos and the Lady of Elliath at the end of the last book when he swore to himself he would never do as she had done, he chooses to pierce the veil of the future as she did. I believe he has come to a better understanding of what love is and the sacrifices you sometimes have to make. Although I didn't find Darin quite as engaging a protagonist as Sara I warmed to him throughout the story. Through him we learn how hard it is, when you have lost all hope and had trust stripped away from you, to risk yourself again. I think this is definitely a book that would improve with a re-read. The first part is very powerful, and as a consequence the middle part - where Darin is getting to know about Sara and about who he is - is much slower. I think during a re-read I would appreciate more the sense of time running out in the middle section, the feeling that this is a respite for Sara, for Stefanos and for Darin. As long as Sara and Darin survive, the Dark hasn't completely won, this is something the Dark Priests and other Servants can't allow to happen. Book 1 - In

Patience is a virtue.

Published by Thriftbooks.com User , 15 years ago
This is the 2nd book of the Sundered series, and like many sequels of a 3+ book series, it suffers slightly because the book spends much of its time explaining the necessary events that will lead to the denouement found in the later books. That explanation IS necessary based upon the ending of the 1st book and Ms. West does a good job interposing new story elements, such as new characters, to keep the story moving. However, because her 1st book had done such a good job getting me hooked on Sara's and Stefanos's romance, I was slightly disappointed that I have to wait for the 3rd book to see more development in regard to their relationship. If one keeps that in mind, the 2nd book will still be enjoyable despite the need to exercise patience until the 3rd book.

Published by Thriftbooks.com User , 20 years ago
From the very beginning this book was interesting. The book is wirtten in a dark atmosphere because the light is weak now in the empire and you simply feel how dark it is. The young Darin is a very touching and real character. There were parts so sad that I even cried. You can actually feel him pain when he is hurting and his relief when he meets the lovely Sara. I have never read a book to move me in such a way.

Published by Thriftbooks.com User , 22 years ago
The doomed love story of the last woman of the Light and the Dark Lord continues in this bleak, haunting installment in the Sundered series. After waking from centuries of enchanted sleep, the stubborn and compassionate Erin, now called Sara by her brooding, bitter husband, remembers none of her past. But now once merciless, once merciful Stefanos must face the wrath of his Master and give up his love for Sara... This book introduces Darin, the boy-child who must grow up to be a man too soon and carry on the legacy of his line. A bright new character who infuses the story with reality. The story is still woven with somber threads and a dark atmosphere. A deep, psychological read. Retains its romance at the oddest moments. Lovely, in a disturbing way.
Copyright © 2022 Thriftbooks.com Terms of Use | Privacy Policy | Do Not Sell My Personal Information | Accessibility Statement
ThriftBooks® and the ThriftBooks® logo are registered trademarks of Thrift Books Global, LLC