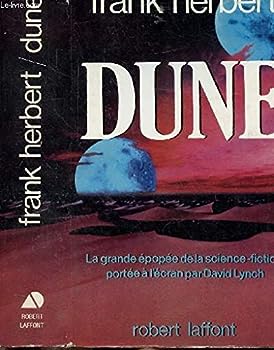 For use in schools and libraries only. On the planet of Aurakis, men, nature, and time attend the messianic and evolutionary growth of Leto and his twin sister Ghanima, children and successors of the mighty Muad'Dib.

It's a Dune story, so the first four stars are free

Published by Erich , 2 months ago
The good: It's a Dune story, so right off it's great to get lost in that universe. The story was very well constructed, very engaging and exciting. The bad: Lot's of made up language that can be hard to follow at times The Ugly: I'm not in love with the supernatural aspects of this story, with the previous stories revolving around science fiction and politics, this one did delve into the super-natural a little bit, and that felt out of place, I wish Herbert had stayed in the strictly Science Political Fiction Genre, but that's one man's opinion. I do recommend this book and the entire series. It's the best selling Science Fiction series for a good reason

A stunning display of writing.

Published by Thriftbooks.com User , 18 years ago
Like others I was hesitant to read "Children of Dune." "Dune Messiah" is my favorite, although it lacked the noteworthyness of "Dune", and I was worried "CoD" would repeat that mistake.When entering into "Children of Dune" I was entering into a new generation, a new group of Atreides, and I did not know what to expect. However, I was met with unsurpassed gracefull writing, and a story that captures you from the start. Immediatly we are thrust into the minds of the Atreides twins, Leto and Ghanima, as they discuss the complex problem of their aunt's abomination, in tongues not used for centuries. These children are exciting, complex, and breath takingly beautiful.The sub plots of the story are just as intriguing. The evil Winciscia has not given up her quest to regain the thrown for house Corrino, and Irulan is magnificent in even her smaller role. Having lost two of the center characters in "Dune Messiah", Paul and Chani, I almost expected to be bored and lost. But I was met with wonderment at characters like Leto II and Ghanima, and the beautifly written return of Muad'dib as The Preacher."Children of Dune" takes you on an adventure as Alia falls into the depts of possession, Arrakis looses it's grip on the Spice, and Leto II finds his quest for the Golden Path."Children of Dune" is a deserving addition the the Dune Chronicles, and deserves a read from Dune fans.

Published by Thriftbooks.com User , 20 years ago
After reading Dune and then Dune Messiah, I was a little disappointed in Messiah. It had lengthy internal dialogue and long explanations of twisted plots within plots. But Children of Dune ranks right up there with the original Dune in my book! What a great story! The twins are awesome in their mental scope and abilities; Leto II is necessarily brutal as his human-ness slips away from him (and he knows it). The sand trout, the worms fears, the destruction of Alia and her abomination within, all warped the readers mind enough to make this a VERY enjoyable read. Now it's on to God Emperor of Dune. Let's see how this goes!

Published by Thriftbooks.com User , 21 years ago
After reading God Emperor of Dune, I am quite glad to readandlearn more about the Dune universe created by Frank Herberthimself. One of the most recent Dune novel I've read is Children of Dune which tells the story of Paul's royal twins, Leto and Ghanima. Both of them have supernatural powers like their father's but one of them is destined to change the history of the universe forever, attempting to save the sandworms from extinction as well as the lost of his humanity. Like other Dune novels, Children of Dune is simply brilliant, packed with politics, religions and a few action sequences. Some of the memorable characters make their appearance as well like Duncan Idaho and Lady Jessica. However, the only catch is that it's too wordy at times. Some people think that it's also too prophetic due to its complexity but readers will later learn that Children of Dune is remarkably beautiful and enchanting. As a conclusion, Children of Dune is one of the greatest achievements ever made by Frank Herbert.

The Best So Far

Published by Thriftbooks.com User , 22 years ago
The Children of Dune is to me the best in Frank Herbert's first half of the Dune Chronicles. I haven't begun to read God Emperor of Dune as of yet having just purchased it, but I'm very excited and anticipate maximum enjoyment. While all of the first three books are good, I think this one tops them because it is a climax bringing together the elements of the first two. It may have been more fitting for Paul Muad'Dib to complete the transformation which would have validated the whole Kwisatz Haderach plot, but I'm still not disappointed. Herbert is a master. What more can be said? The Children of Dune is one of the best SF books I've ever read and I couldn't put it down. The Atreides twins were awesome. This somehow comforted my sense of loss at Paul's pitiful fate. . .I think The Children of Dune well worth all five stars--plus!!Be sure to read this one. If it doesn't impress you, I don't know what will.

Next to Dune, the best of the lot

Published by Thriftbooks.com User , 24 years ago
Children of Dune, the third book of the Dune chronicles, tells the story of the Atreides destiny after the disappearance of Muad'dib. The children of Muad'dib, Leto and Ghanima, now must take up the heavy burden left by their father. Old faces pop up, and there are many plot twists (but do we expect any less from Herbert's grand work?). The scope of this book is much broader than in Dune Messiah, which makes it a more enjoyable read. How can a series of books continue to produce, particularly under such heavy expectations? Who knows, but Children of Dune continues the rich tradition of the series
Copyright © 2020 Thriftbooks.com Terms of Use | Privacy Policy | Do Not Sell My Personal Information | Accessibility Statement
ThriftBooks® and the ThriftBooks® logo are registered trademarks of Thrift Books Global, LLC