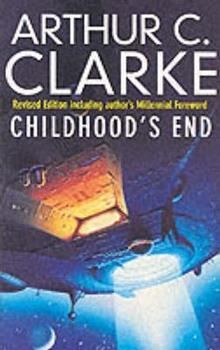 Without warning, giant silver ships from deep space appear in the skies above every major city on Earth. Manned by the Overlords, in fifty years, they eliminate ignorance, disease, and poverty. Then... This description may be from another edition of this product.

Published by Randy Bowden , 3 years ago
Although this book was written many decades ago, that fact does not enter into your mindset when you are reading it. This is the 4th (at least) time I have read the book and it was nice to reconnect with an old friend again. Anything by Arthur C. Clarke is a guaranteed good read. I originally bought this copy as a gift to a friend who is a sci-fi fanatic, but the condition was not good enough for me to give it to him. (Well, the book IS over 50 years old!) So, I read it again myself and thoroughly enjoyed it. The story concerns aliens who come to earth and, basically, take over our planet. The most interesting part is that they will not reveal themselves to the earth's population, thinking we would not be able to handle their appearance. This, more than the takeover of the earth, is primarily what drives the story line. No spoilers here! As expected, an extremely well-written book by Mr. Clarke and, as noted in the headline, it is my favorite book. If you love a mystery combined with the sci-fi genre of the book, then this is a must-read for you. Trust me, you will not be disappointed.

Not to be missed SF classic

Published by Thriftbooks.com User , 18 years ago
It sounds like a story you've heard before: great alien masters descend on Earth and take control of the world, ushering in a golden age that may be cleverly disguised creative slavery. But Clarke's legendary novel (equal to _Rendezvous with Rama_ and _2001: A Space Odyssey_ in fame) isn't about a human rebellion against alien overlords, but the evolution of humanity into its next stage, and the ultimate dwarfing power of the unknowable order of the cosmos. The narrative glides between different characters and different eons, occasionally with a seeming clumsiness that turns out to be purposeful plotting devices. The pay-off is sublime science-fiction poetry that shows the genre's power to transcend human drama and fly into the infinite. The sheer scope of its conclusions leaves the reader wiser and sadder, the sign of a superb novel.

Published by Thriftbooks.com User , 20 years ago
I was strictly a dabbler in science fiction, until this book grabbed me and pulled me in. To this day, it ranks as my favourite in the genre.The Overlords appear one day over every city on Earth, and with little resistance, mankind submits to the technologically superior race. After all, their demands are entirely benevolent; they seem to want no more than to end war, poverty, and the other evils that have always plagued the Earth. But why? Through three generations, a few people endeavour to find out.What they finally learn is something they never imagined: mankind's terrible and wonderful final destiny, and the part the mysterious Overlords are fated to play in achieving it.Many of Clarke's novels are somewhat lacking in character development, and though Childhood's End is not an extreme example of this tendency, some fairly important characters are only half-formed. In some books, this is a flaw, but when Clarke is truly in his element, the vagueness of the characters seems to work in the story's favour. Here, particularly, I found myself getting quite attached to characters it seemed I barely knew (including some of the enigmatic aliens).One feature I particularly liked in this book was the glimpse of the Overlords' home world, a tour of wonders that Clarke knows better than to try and explain in terms of known science, at least not with any detail. If anything, the mystery of it all makes the story-- and the Overlords-- seem more real.The ending, though inspiring from a certain angle, can be a downer in terms of the characters you come to know and like, no matter where your sympthies end up lying. Mine, in the end, fall with Karellen, the Overlord supervisor, who, like the other Overlord characters, manages to be thoroughly believable despite the fact that his background and motivations remain more or less a mystery.Science fiction is often infused with philosophy; this book pulls off the mixture better than any other I've read.

Published by Thriftbooks.com User , 21 years ago
The vision of Arthur C. Clarke's Childhood's End is as remarkable and beautiful in the year 2001 as it was the day that it was written. I was doing some internet research on the great author when I stumbled upon some recent customer reviews on this masterpiece. It appears that many children in Illinois were recently coerced into reading this book by some Overlord of a teacher. (I'll bet that teacher looks like Satan, himself.) Most of these reviewers felt that this book was an inconvenient waste of time. After all, this time could have been spent watching Temptation Island. One reviewer wrote: "Exactly the type of endings that made me a science fiction hater to begin with. Nothing happened like I expected." The conclusion of this book is quite unexpected. This is, no doubt, disconcerting to children who have been raised on the predictable outcomes of Baywatch, V.I.P., and, of course, the W.W.F. This same reviewer stated: "Nothing imaginative happened, things just disappeared and the book ended". What happens at "Childhood's End" is something that must be believed, in order to be seen! Some twenty thousand years ago, a small change in genetic code transformed certain primates from cannibalistic beasts into beings capable of producing the Mona Lisa, Beethoven's Ninth, and the writings of William Shakespeare. Childhood's End raises the question: What if there is yet another key inside the soul and/or physical being of humankind that can transform us once again as an entire race. Witness the sadness of the Overlord who is condemned to only sit and watch. With all of their advanced technology, with all of their seemingly vast power, The Overlords cannot take that next step. Even with their mighty ships, The Overlords require years to travel across the galaxy. What if humans will one day traverse the galaxy instantly as beings of sheer thought and pure energy. I guess the students of Illinois are not yet ready for "Childhood's End".

Published by Thriftbooks.com User , 22 years ago
If you are an Arthur C. Clarke fan, you must read this. Characteristically, some of his main themes include the tension between rationalism and mysticism, which crops up repeatedly in his work, as in the ending of "2001: A Space Odyssey", or in "The Fountains of Paradise", to name just two examples. He seems to have a real love/hate relationship with this issue -- as far as I know, it may date from his experiences, as a scientist, of local religious beliefs in the land he has called home for decades now, Sri Lanka... At any rate, in this book the "Overlords" are a mysterious, powerful, but ultimately tragic group of beings which have vastly potent minds, but which cannot undergo the spiritual metamorphosis which would take them into direct communion with the sort of Godhead that directs their (and our) destiny. I liked Clarke's ideas about utopia, which is more or less what the Earth becomes after a few generations under the guidance of the Overlords. He seems to have had a lot of fun playing with ideas about future art forms, for example, among other things. However, this utopian society is doomed, because of an unforeseen, quantum leap in evolution, which turns out to be an evolution of the communal spirit. Clarke has a lot to say here about what connects us to each other, as human beings. Are we all linked with some higher being at the level of spirit, in the manner that islands would be revealed to be all linked, if one were to somehow drain the world's oceans? Or is striving toward a planned, ordered, social utopia, with allowances made for developing all of every individual's gifts to the fullest possible degree, the best way to relate to each other? These are the sort of questions that Clarke explores in this terrific novel, and he does it in a highly entertaining fashion throughout.

Published by Thriftbooks.com User , 22 years ago
I fell in love with movies when I first saw 2001: A Space Odyssey. I fell in love with books when I read this science-fiction masterpiece. Both deal with what one might transcendental evolution i.e. mankind taking the next or final step in ways way beyond science (or, at least, "explainable" science). No other novel I have ever read (s-f or otherwise) has ever filled me with such an epic feeling of loss and loneliness. This short tale -short by today's standards- tells of the sudden, but benign, invasion of Earth by a superior race from other space. The media dubs them "the Overlords". Clarke masterfully unveils their mysterious plans to midwife the human race as it unknowingly is about to give birth to the next generation. It will be a generation that bears very little resemblance to the ones before it. The three stories about 1) our first face to face meeting with the Overlords (a monumentally advanced race that sadly knows it will never get anymore advanced), 2) the Golden Age that follows their arrival to clear the way for the next generation and 3) the tradgedy of our species having to watch and comes to terms with its own extinction all fill you with awe and wonder. Clarke skillfully creates whole characters with economy and fluidity. His descriptions of other worlds would stop George Lucas and his wizards in their tracks. Those worlds are utterly alien and believable. However it the emotions of romance, yearning, loss and desolation that send you reeling. This book extends the reaches that 2001 sent you out on and it saddens you deeply. Few authors have ever used science better to thruster power their imagination. Clarke has done it many times in novels and stories. Childhood's End is his finest work.
Trustpilot
Copyright © 2022 Thriftbooks.com Terms of Use | Privacy Policy | Do Not Sell or Share My Personal Information | Accessibility Statement
ThriftBooks® and the ThriftBooks® logo are registered trademarks of Thrift Books Global, LLC