This description may be from another edition of this product. With amazing clarity and total recall, Shirley Temple Black vividly describes her experiences as a child actress. Despite abuses by exploitive studio executives, her talent and perseverance could not...

In my mind, she remains the precious little girl with all the curls.

Published by Southern Lady , 4 months ago
The book revealed a lot about early Hollywood and it appears it was not inhabited by nice people. I would have enjoyed knowing Bill Robinson. He sounds like a class act.

Published by Thriftbooks.com User , 3 years ago
I really enjoyed learning all the details, such as her pay and how the child actors were treated. Also, much More for that time. But, when I got towards the middle of the book, the Reading started to get dry and I never Picked it up again. I agree with another Reviewer, the book is too long.

Read this ages ago but really liked it.

Published by Jeffery A Prince , 4 years ago

Published by Thriftbooks.com User , 12 years ago
This book is an easy and entertaining read. Mrs. Black is a very good writer. I read it out of interest in Shirley Temple, who she was, why she stopped acting, where she is now. I got more than that. She explains what she was thinking, her excitement, her terrors, her reflections of being adored by so many. The fake tears, the real tears, the laughs, the family, the friends, and the industry. And now i have a deeper appreciation for this talented actress because of this book. I'd recommend this book to anyone interested in who Shirley Temple was.

Published by Thriftbooks.com User , 14 years ago
This book provides a rare and fascinating look behind the scenes of the Hollywood motion picture industry, including the haphazard way in which "discoveries" were made, the almost ludicrous way decisions were made, etc. Shirley also relates how she was grossly cheated by Twentieth Century Fox by being nailed down to a five-year contract at $150.00 a week when a few weeks later Paramount offered to borrow her from Fox at a salary of $1000.00 per week. She goes on to quote dollars-and-cents amounts to demonstrate how she (or her mother) was repeatedly cheated, how false announcements were issued to the press as to her salary. The careful detail she goes into indicates that she (or some assistant) has done considerable "homework." Shirley cycles from intra- and inter-studio political maneuvering to financial dealings, to candid details of other stars, to her schooling and her home life, thus keeping the story interesting and appealing to a number of different tastes. Among these are extraordinary events like two assassination attempts, visits to the White House, the governor of Massachusetts carelessly slamming a car door on her hand, etc. The story gets more horrendous during her adolescent career. While her contract negotiations were going on at MGM, the fourteen-year-old Shirley was treated to sexual advances by the producer of "Wizard of Oz" with promises of stardom if she put out and threats of being washed up if she didn't. Her mother, meanwhile, was being subjected to the same treatment by Louis B. Mayer, the studio boss. Four years later, David O. Selznick pulled the same carrot-and-stick ploy during contract negations with his studio and on another occasion locked his office door and literally chased her around his office. Shirley relates in detail how she escaped from each of these sexual harassments with one glaring exception: a train ride to location shooting of one of her "grown-up" movies. In this case, the producer of "Wizard," now employed by Selznick, tried to r*pe her. This coy ducking of the incident is infuriating. If the r*pe didn't succeed, why does she not recount in detail how she got out of it, the way she does with all the other incidents? He tried to r*pe her again at his home some weeks later and she describes what she did to him to get out of that one. She recounts how her own father ignored the court order under the Coogan Act and did not deposit any of her earnings in her trust account during her adolescent years (the pictures she made between age 14 and age 20). He had also kept all her childhood earnings (before the Coogan Act). Her father was uneducated but fancied himself a financier and lost all Shirley's money in one way or another. Consequently, out of over three million dollars earned in 19 years of stardom, Shirley Temple was left with only eighty thousand. At twenty and married for the second time, she relates how she was induced to have a Caesarian at Bethesda Naval Hospital w

Published by Thriftbooks.com User , 18 years ago
When I first read the book from our local library I thought it was going to be another boring life story like all the others I have read, little did I know that this one was going to be something special.After I read it, I sank back on my bed and said out loud "THIS IS JUST LIKE MY LIFE".I was also a younge star on stage as a child and then one moment it was taken away from me because I was no longer cute or babyish.This is why I had buy the book to remind me of who I am and never give up.Thank you Shirley Temple Black for a real outlook on life.

To long , but over all , she had a very amazing life .

Published by Thriftbooks.com User , 22 years ago
I am now reading this book for a report , and some horrible things have happened to her , but I thought her life was very interesting . But then again I admire Shirley Temple Black for everything she has done .

Child Star Mentions in Our Blog 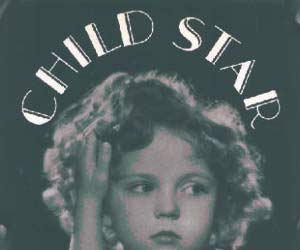 Since the 1920s, child actors have been staple of Hollywood, beloved by fans, but often treated as an expendable commodity by studios. Their experiences are marked by certain similarities: fleeting fame and a loss of identity once they are no longer in show biz. Read about some of these extraordinary childhoods.