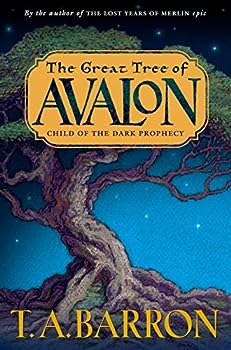 Child of the Dark Prophecy (The Great Tree of Avalon, Book 1)

This description may be from another edition of this product. As in his acclaimed epic The Lost Years of Merlin , T. A. Barron has created a radiant, richly imagined world, full of high adventure and un-forgettable characters. Long ago, the great wizard Merlin...

Published by Thriftbooks.com User , 16 years ago
This kept me thrilled throughout the whole book. I couldn't put it down, following the adventures of Scree, Ellie and best of all Tamwyn. As they each set out on seperate quests to save Avalon. As Scree tries to save his eaglemen. Ellie tries to destroy the crystal that could mean the end of Avalon. As Tamwyn tries to relight the wizard's staff and find his father. Brillant!

An excellent bridge to part three

Published by Thriftbooks.com User , 16 years ago
Middle books in trilogies can be tricky. Not only must they sustain the story introduced in the first installment, they must develop it sufficiently to keep the reader turning pages before handing everything off to the last of the trio. Good middle books do this; very good middle books leave the reader impatient for the finale and keep him or her thinking about where the story is likely to go for quite some time. I am happy to report that T.A. Barron has done that and more with the second installment of The Great Tree of Avalon. The book is divided into three separate story lines after an unsettling beginning that finds Tamwyn, Ellie, Briona and Scree atop Hallia's Peak, awaiting a vision they hope will tell them how and where to begin their fight to save Avalon and finally defeat Rhita Gawr and his minion, Kulwich. No sooner has this vision unfolded than a shocking attack kills one of the rarest creatures in Avalon and wounds Scree. From there, Tamwyn, Ellie and Scree must follow separate paths, hoping the results of their journeys will return Avalon and the stars overhead back to a healthy state. As each character follows their quest, their growth and realization that their need and feelings for other members of the story unfold in ways that feel right and contribute to the flow of the story. Enough happens in this middle part of the trilogy to keep you turning pages while leaving a setup for a dandy finale in the book to come. Tamwyn and Ellie both do some growing up in this book, but the surprise is how the events in the book effect Scree. I thoroughly enjoyed the book and found myself pondering how T.A. Barron will resolve some of the seemingly impossible challenges that face the characters by the final page.

Published by Thriftbooks.com User , 16 years ago
When I first read it I was just expecting a good read, what I got was the best book I've ever read. I have read all the major fantasy books, Harry Potter, Artemis Fowl, The Bartemaus Trilogy, Eragon, The Narnia Series, you name it I've probably read it. But out of all the books I've ever read this one has got to be my favorite. A boy who loves to stare at the stars and run searching for his lost brother, a girl just esacaped from slavery helping a stuck up priestess search for merlin's staff and heir, a hoolah (no I am not going to tell you what a hoolah is you'll have to read it to find out), who learns that life is not completely just a game, and an evil wizard bent on taking over Avalon. When these people all collide things might get a little messy. Everything in the book though revolves around this one prophecy that in the eighteenth year there will be a child that spells the end of avalon and the only one who can stop him is Merlin's true heir. You have got to love this book, hope you read it.;)

Published by Thriftbooks.com User , 16 years ago
The Great Tree of Avalon by T.A. Barron is not only the best book by this masterful writer but one of the best books ever written in the English language. It's truly riveting, fabulous, and full of surprises. With colorful descriptions that make you feel like you are really there, Barron leads the reader through a rip-roaring adventure of epic proportions. It made me think instantly of the marvelous storytelling of J.R.R. Tolkien. All of the characters are so real and vivid that I now count them among my friends. I just can't wait for Book Two! I think that everyone (including adults, because this is definitely NOT just for younger readers) should immediately put this on the very top of their summer reading list!

Published by Thriftbooks.com User , 17 years ago
I am a long-standing lover of fantasy, but I've found that the genre can get a little standardized with many authors using formulas and/or taking too many cues from J.R.R. Tolkien. However, T.A. Barron's new book is truly original and a captivating read. On the surface level it's a terrific old-fashioned adventure story. But Barron also uses the tale of a made-up fantasy world to reflect profound issues that we face in the real world. This is something that only the very best fantasy novels achieve, and for me it's what makes the genre so fascinating. With its powerful themes of environmentalism, human arrogance, and heroism, The Great Tree of Avalon is a wonderful story that resonates just as much in the real world as it does in its own brilliantly crafted fantasy one.
Copyright © 2020 Thriftbooks.com Terms of Use | Privacy Policy | Do Not Sell My Personal Information | Accessibility Statement
ThriftBooks® and the ThriftBooks® logo are registered trademarks of Thrift Books Global, LLC