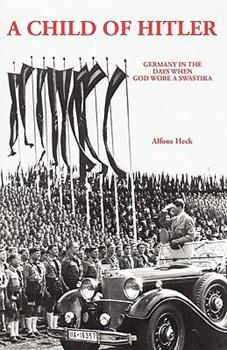 A Child of Hitler: Germany in the Days When God Wore a Swastika

by Alfons Heck and Alphons Heck

In this starkly candid account of one boy's indoctrination into the Hitler Youth, we see a side of Nazism that has been little recorded. This autobiographical account is a rare glimpse at World War II from a German boy's viewpoint.

A must read to understand how entire nations can go wrong

Published by Thriftbooks.com User , 19 years ago
I first heard of this book in the late 1980s, when I was at Western Kentucky University. Alfons Heck was touring universities with a Jewish survivor of the Holocaust, and together they would tell the stories. Mr. Heck was amazing -- a sweet, gentle old man, now not only horrified at what he had participated in, but very worried that this could happen again, that people could allow themselves to be twisted in such a way. It was his message over and over -- look for ways that you are being manipulated, think twice before you look for blame on how your life or the economy is going, or you get caught up in a movement, etc. I bought the book right then and there. It is not a very well-written book, true, but the honesty and detail are spell-binding and put this book in the five star range. It's a must-read for anyone wanting to try to understand how entire communities/nations can go so very wrong. I had him sign my copy, and he said at the time that the rights had been bought to make it into a movie. I asked him who he wanted to play his part. He looked up from the book, smiled, and said, "Someone good-looking!" The Jewish lady he was touring with came up at last and put her hand on his shoulder. "Alfons, Alfons, we must go now. We have to go." It was said with such affection.

A Hitler Youth evolves into a Master storyteller.

Published by Thriftbooks.com User , 21 years ago
I should have read this book first, but I stumbled onto Mr. Heck's Burden of Hitler's Legacy in my local library. Mr. Heck was 17 years of age when his country was defeated on March 10, 1945. It took him more 30 years to begin to come to terms with what Hitler did to Germany, Europe, and the millions of people who lost their lives, which includes the 6 million Jews, yes, but also the millions and millions of men, women, AND children who died because of Hitler's determination to be all powerful in the world. There were also those millions who lived on, after the war, who would have to adjust to the results of Hitler's need for power.Mr. Heck shows us that Hitler prepared the children of his "beloved" Germany to fight for his vile beliefs and thought nothing of the impact his hatred had on these kids. One of the saddest things that I thought about as I read this gifted writer's treatise about the Hitler Youth movement was the waste of this man's talent. He should have been writing all his life. He should have had the FREEDOM to develop the talents he was born with. Read this book and weep, as I did, when I read Mr. Heck's final paragraph in this powerful, true story of the Hitler Youth. For me, what Hitler did to the children of his country, there are no words to describe what I felt. Just writing this review makes me cry.Mr. Heck, if you are still with us, I hope you will continue to write and publish. And I hope you have peace at last.

Published by Thriftbooks.com User , 22 years ago
As a student of the Second World War I am very critical when it comes to the books I read over the subject and their sources. Heck's account is nothing short but a must read on the subject. I believe this work is as important as "The Diary of Anne Frank". Most books over this period usually concern themselves with portraying the Germans as monsters and sadists but Heck really gives us an inside depth into the Nazi mentality, especially the Hitlerjugend. In the end he makes the assertion that most regular Germans were the other victims of Hitler besides the Jews and as you read the book you begin to see on what he grounds he bases this claim. The book is a fast read, easy to follow, rich in detail, and very touching. As my German title suggests, "one must read this book"!

Necessary for a complete understanding

Published by Thriftbooks.com User , 23 years ago
This book was so touching to me because it revealed a much-ignored and rarely mentioned side of WWII. It was a surprisingly human story, one that I never thought I'd hear. I applaud people like Mr. Heck who can stand up and say "There's more to the story." This book is a beautiful homange to the hardships, both humble and terrifying, that Germany's youth faced under Adolf Hitler. I highly recommend this book to anyone with the passion to learn more than the history books tell us.

Published by Thriftbooks.com User , 23 years ago
This book is by far the best account of the other side of the Holocaust. The side that no one cares about and that no one bothers to read. It helps to illistrate why people followed Hitler and what power he had over the population. You can't ask for a better account of the Hitler Youth, or of Germany during World War II. I loved this book and think that every person in the world should be forced to read to gain an understanding of the followers of Hitler.
Trustpilot
Copyright © 2022 Thriftbooks.com Terms of Use | Privacy Policy | Do Not Sell My Personal Information | Cookie Preferences | Accessibility Statement
ThriftBooks® and the ThriftBooks® logo are registered trademarks of Thrift Books Global, LLC