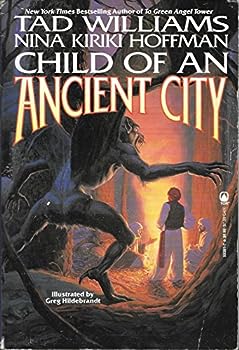 Child of an Ancient City

This description may be from another edition of this product. This fantasy is the latest in the Dragonflight series and is written by Tad Williams, the established bestselling fantasy author, and Nina Hoffmann. The book contains several interweaving stories and...

Published by Thriftbooks.com User , 20 years ago
Hi all,I'm an absolutely _huge_ fan of Tad Williams. I've read everything out there from Talechaser's Song to Mountain of Black Glass (and read MST three times). I've read both of his shorter works: Child of an Ancient City and Caliban's Hour. In reading Child, I found the prose weaker than what I was accustomed to with Tad: perhaps this was due to the condensed nature or perhaps it was that much of the text was actually written by Nina? I'm undecided. On the whole I enjoyed it more than Caliban's Hour. I would recommend this book to fans of Tad but not to the uninitiated.

Published by Thriftbooks.com User , 22 years ago
I am a big fan of Tad Williams Dragonbone chair series. This is different but still very good a nice variation on the traditional vampire story.

Excellent Story; well worth your money

Published by Thriftbooks.com User , 22 years ago
A very interesting book. A group of travellers is ambushed by bandits. Then, their companions are slowly killed off by this mysterious "vampyr", which drains them of blood. Then, it challenges them. Whoever tells the saddest story lives, but in the end, it wins. When the boy is chosen, his pity and sorrow about it's plight somehow angers it(why it let's them go is beyond me.) and it lets them go, it's too short though, and the stories, except for the Vampyr's are not very sad at all, but otherwise, a good book. Good reading for all ages.

A Most Unique Volume!

Published by Thriftbooks.com User , 22 years ago
I was first drawn to "Child of an Ancient City" while awaiting the last installment of Memory Sorrow and Thorn, and found myself intially apprehensive, but later enthralled. This book is indeed a worthwhile read. Set in a world that could very well have existed 200yrs or 2000yrs in the past, this tale begins with a raid on a merchants caracan, whereby a lucky few are thrown together, companions by necessity now more than choice. Then, as they make their way back to civilization, they are followed by a mysterious lurking presence. One by one they are lost, until they finally realise what they face, a creature of a nocturnal, blood craving nature, who is immortal, and invincible. Their only sure way of surviving is to sit around camp fires by night, each taking turns to tell tales to keep this creature entertained until the daylight hours. All goes well until they must compete against each other for their very lives. Overall the story is quite entertaining, and the addition of a whole series of smaller stories of mythos and legends, add to make a book with great depth of character. My favourite being of the Holy-man whose very ability to perform miracles depended on his impurity of spirit. Well worth a read.
Copyright © 2020 Thriftbooks.com Terms of Use | Privacy Policy | Do Not Sell My Personal Information | Accessibility Statement
ThriftBooks® and the ThriftBooks® logo are registered trademarks of Thrift Books Global, LLC