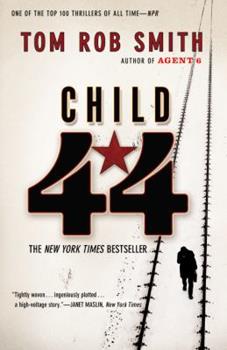 (Book #1 in the Leo Demidov Series)

The New York Times bestselling novel that inspired the major motion picture starring Tom Hardy and Noomi Rapace In a country ruled by fear, no one is innocent. Stalin's Soviet Union is an official paradise, where citizens live free from crime and fear only one thing: the all-powerful state. Defending this system is idealistic security officer Leo Demidov, a war hero who believes in the iron fist of the law. But when a murderer starts to kill at will...

Published by Thriftbooks.com User , 13 years ago
A thriller! Unconventional. Unpredictable. I didn't know how it could possibly end. The plot of this story and the carefully crafted setting in the former Soviet Union is so good that you will race to the finish. Everything works backward in the Soviet Union. Good is bad. Bad is good. And to add nuance, Stalin dies in the middle of the book so you don't even know to what degree good or bad. At times you are lost in a house of mirrors, not knowing what will happen when the characters move right or left. Now add a brilliant plot, worthy of John Le Carre at his very best. And I mean at his very best. For when it comes to logic and plots, even John Le Carre isn't John Le Carre anymore. The Panama Tailor, with its story of the Japanese takeover of the Panama Canal, representing his weakest entry. But Child 44 has a couple of twists that invoke the sort of chills that came with The Spy Who Came in From the Cold. Of course, Tom Rob Smith is no John Le Carre, at least when it comes to language. I mean he has a few lines... "To stand up for someone was to stitch your fate into the lining of theirs." Or "the wallpaper was bubbled like adolescent skin." But it is the unpredictable plot, not language, that rules this story. Now, there are times when I really wondered. I have visited all of these places in Russia many times, from Rostov to Moscow and points east. And I am going back this year, from St. Petersburg to Volgograd to Yekaterinburg to Vladivostok. I kept telling myself that I have to pack this book along and ask my old Russian friends about the validity of some of the author's ideas. Let's face it the Wall not only kept them in, it kept us out. Yet still, some of them are as ignorant as we are about real life in the former Soviet Union. The book has a couple of distractions. There are some odd, James Bond moments, probably thrown in for the movie version to come, but hey, good luck happens. From the looks of his picture on the jacket, this author is young. So his language will develop sophistication. And his experience will bring more realism to his works. But his ability to plot is so profound and his character development so complex that we will surely be reading many of his new stories for years to come. Those are gifts of a brilliant, unconventional, easily bored mind. They cannot be developed. You got em or you don't. And Tom Rob Smith has got em.

With the Chill of Soviet Truth

Published by Thriftbooks.com User , 13 years ago
If it weren't for the Soviet Union and the blood lust of the Russian communists, I would not exist. My parents were World War II refugees, on the run for their lives from Soviet-occupied Latvia. They arrived in the United States at about the same time, immigrants with nothing but what they wore on their backs, with the most skeletal English language skills. Had they not spotted each other across the room of immigrants and felt drawn one to the other, well, that would have been an entirely different story, and without me in it. Even so, you won't hear gratitude from me. My existence does not by any measure outweigh the brutalities of Soviet power. A large percentage of the Latvian population was deported, tortured and executed under the communist regime. My life cannot measure up to such suffering of the multitudes. In later years, I traveled several times to the Soviet Union to see for myself this world that had so often been described to me, yet nonetheless remained and remains nearly incomprehensible. The experience of my travels behind the Iron Curtain is a memory that will never leave me. These are the memories and impressions returned to me with the reading of Tom Rob Smith's debut novel, Child 44. Tom Rob Smith has taken his premise for Child 44 from the true story of Russian serial murderer, Andrei Chikatilo, who murdered over 50 women and children in Russia during the 1980s. Although Smith has set his story in an earlier time period, the 1950s, he has not lost, but only gained levels of intrigue and suspense by choosing the worst years of Soviet oppression. The difference, the author explains, is that in the latter years, someone in open rebellion against the political system might lose an apartment, while in earlier years, it would have meant the loss of life. The story of Child 44 has the chill of historical and political accuracy. The author is still in his twenties at this writing, yet the combination of his research and already rich life and travel experience have given him the depth of insight required to bring this tale of Soviet horror vividly to life. I had to wonder, in fact, and quite often during my reading, how many readers less aware of Soviet history might construe this as mere fantasy. In too many ways, it is not. The sense of unraveling sanity and logic threaded throughout daily Soviet life is all too real: Black is declared white and white, black. What you see, you are told, is not what you see. What you know is not to be known. Deny everything. And in saving your own life, choose who will die among your loved ones. Leo Demidov is a key character, the communist detective pursuing the killer who cannot be named. The first insanity is that the Soviet government denies the existence of crime in its so-called utopian state. If life is perfection, why would anyone commit a crime? Crime, they claim, is an outgrowth of a capitalist society. And then, a crime so gruesome as to kill a child, ripping open his belly to expos

Published by Thriftbooks.com User , 13 years ago
Long a fan of "Citizen X" the HBO film about Russian serial killer Andrei Chikatilo, who killed children at large in the Soviet Union from 1978-1990, I'd heard some buzz about "Child 44", but didn't read any reviews until I purchased the book. The young British author, Tom Rob Smith, made my jaw drop with his version of historical fiction, because yes, Smith takes the tale of Andrei Chikatilo (who has been written about in true crime genre) and moves it BACK in time, keeping the tale somewhat intact but setting it in Stalinist Russia in the early 50's. The contrast is startling, because, by the 80's, near the end of the Cold War, the denizens of the USSR had been disillusioned by the "glory" of Communism and had spent decades poor, hungry, frightened of the state. Despite that, the hunt for Chikatilo in the 80's was funded and followed, somewhat as an afterthought, by the state. In the 50's, with Stalin's grip on the nation--it's a worker's paradise in everything but reality. And the leader would never allow such crimes as murder to exist. And with this change of landscape, the author, with what must have been painstaking research of the times, heightens the suspense, creates a sense of absolute hopelessness, and puts the military hero tracking the killer in fear for his own life and those of his family. Pursuing the killer, and refusing to denounce his own wife, Leo Demidov places his own career and life in jeopardy. In addition to the deft way in which the author moves from Leo's childhood to his present, from the killer to Demidov and back, and into the stark conflict that is Leo's life with his wife, Raisa, Smith doesn't give up his terse, descriptive style; of the forbidding Lubyanka, he writes: "Its façade created the impression of watchfulness: rows and rows of windows crammed together, stacked up and up, rising to a clock at the top which stared out over the city as though it were a single beady eye. An invisible borderline existed around the building. Passersby steered clear of this imaginary perimeter as if fearful they were going to be pulled in. Crossing that line meant you were either staff or condemned. There was no chance you could be found innocent inside these walls. It was an assembly line of guilt". Brilliantly conceived, and flawlessly executed, "Child 44" is the best book I've read so far this year.

Published by Thriftbooks.com User , 13 years ago
Leo Demidov, war hero in the post-war Stalinist Soviet Union, is an officer of the NKVD the CID of the Red State. Crime was a simple matter in these times. The suspect was inevitably guilty simply because he was suspected. Some crimes, considered bourgeois, officially could not exist in a workers paradise. Among these non-crimes was murder. Demidov is assigned to tell a father his son was not killed but rather the victim of an accident. But doubts continued and in Stalinist Russia doubts were treason. Convinced a serial killer was murdering children, Demidov pushes forward despite the danger. Demidov is soon a victim of this Alice-in-Wonderland state. When it happens this book quickly becomes a thrilling tale of pursuit and capture. To discuss it further is to dimish the pleasure that awaits the reader. There are sure Edgar nominations for Tom Rob Smith from the Mystery Writers of America in two categories-Best First novel and Best Novel. He may well win both awards.

Published by Thriftbooks.com User , 13 years ago
Leo Stepanivich Demidov, a war hero and member of the MGB, working as a high ranking employee of the State Security force, started off with one ambition: to serve his country. His job was frequently unpleasant, arresting and interrogating enemies, sometimes their own citizens who tried to undermine the government. Leo was involved with many successful arrests and took many prisoners, many of these prisoners guilty of anti-Soviet agitation, counterrevolutionary activity, and espionage. The problem was, no on could be sure they weren't guilty of these crimes, anybody from a retired vet to a top-ranking Party official could be under constant threat of arrest for attempting to overthrow, subvert, or weaken the Soviet Power. When Leo finds himself in danger of arrest himself, the story starts to twist, and together Leo and his wife struggle against the very system that he once obediently and willingly served. Leo and his wife are obsessed with solving a string of murders and this gruesome case soon becomes a cause they are both willing to die for. "Isn't this the way it starts? You have a cause you believe in, a cause worth dying for. Soon, it's a cause worth killing for. Soon, it's a cause worth killing innocent people for" PG 393. In trying to find justice, they were quickly forced to imitate the very system they were up against. Child 44 was a thrilling mystery, love story, and horror story all in one. Even though parts of it were sickeningly gruesome, I found it hard to put it down. I have already recommended this book to many friends, and look forward to subsequent novels from this author.
Copyright © 2020 Thriftbooks.com Terms of Use | Privacy Policy | Do Not Sell My Personal Information | Accessibility Statement
ThriftBooks® and the ThriftBooks® logo are registered trademarks of Thrift Books Global, LLC