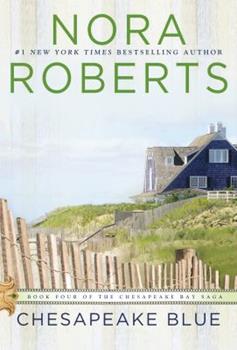 The final novel in #1 New York Times bestselling author Nora Roberts' stunning Chesapeake Bay Saga, where the Quinn brothers must return to their family home on the Maryland shore, to honor their father's last request... It's been a long journey. After a harrowing boyhood with his drug-addicted mother, Seth had been taken in by the Quinn family, growing up with three older brothers who'd watched over him with love. Now a grown man returning from Europe...

Published by Thriftbooks.com User , 18 years ago
I absolutely loved the brothers trilogy, it was truly my favorite of all Nora Roberts trilogys. Of course I do love them all! This book was telling the story of Seth as he now is grown up. I felt like I knew the entire family and cared about each and every one of them. Seth is home with his family, the business, and the mother who has followed him over the years since he was a young boy. Blackmailing him, doing her best to ruin everything for him and for the family that gave him everything and made him who he is. Although he's all grown up now, he'll still pay her off, do just about anything to protect the family he loves. Dru enters the picture, who has fled a cheating fiance and the life of the wealthy in Washington D.C. to strike out on her own in St. Chris. She owns a flower shop and does her best to fit into the community. Given her experience with men, she doesn't want to fall in love, doesn't even want to date. But Seth can be as convincing as any of the Quinn men and Dru finds herself in love with Seth. I think Nora Roberts did an excellent job with this ending story. Her plot was great, the ending was a surprise and all the characters we loved in this trilogy have returned. If you start with this book you may want to read the first three to start.

Published by Thriftbooks.com User , 18 years ago
"Chesapeake Blue" by Nora Roberts is a wonderful addition to the excellent Chesapeake Bay trilogy of "Sea Swept", "Rising Tides", and "Inner Harbor". The much-anticipated tale of Seth Quinn has finally arrived, and it was well worth the wait. Nora Roberts has written a romantic, insightful, and touching tale that stays true to the original trilogy and is sure to have readers everywhere cheering and begging for more. Seth Quinn, the troubled and angry young boy adopted by Cam, Ethan, and Phillip after the death of their father, Ray Quinn, is all grown up and coming home. Now a successful painter who has conquered Europe, all Seth wants is to return to the big white house on the bay and be with his family. Troubled by a secret that has weighed on him heavily for more than a decade, Seth needs the peace that only home can bring. And it is absolutely wonderful to see all of the characters we fell in love with in the previous three books. We see the most of Cam and Anna, because Seth lives with them, but Ethan and Grace, and Phillip and Sybill are never far away. Though 18 years have passed, not a whole lot has changed as far as the Quinn family dynamics are concerned (though the family has grown considerably), which I was immensely relieved to see. Grace and Ethan's daughter Aubrey is all grown up as well, and is a very important part of Seth's life. Though some things never change, like the love and support Seth's family will always provide, there have been some changes in his hometown of St. Christopher. The most fascinating of which is the arrival of Drusilla Whitcomb-Banks, who has moved from D.C. and opened a flower shop. Intrigued by the beautiful Drusilla, Seth sets about trying to get to know her better. Dru, who comes from a wealthy and influential family, has come to St. Chris to get away from the demands of her previous life. Seth is determined to paint the lovely Drusilla, and as he convinces her to pose for him, and spends as much time with her as possible, the two of them begin to fall in love.The romance between Seth and Dru is beautifully rendered and sure to touch readers' hearts. Drusilla is slow to trust and wary of relationships, but her misgivings are no match for Seth's charm, warmth, and love. Seth and Dru make a fabulous couple, and I was completely caught up in their developing relationship. But trouble is brewing on the horizon, and the painful secret that Seth has been hiding for years is about to come back with a vengeance. Linked to his painful past, Seth's secret has the ability to destroy his new love and hurt his family. Conflicted, unhappy, and determined to keep Dru and his beloved family out of the mess he is in, Seth is heading for disaster. Will Seth trust in Dru's love, bite the bullet, and tell her and his family the truth? The tight knit Quinn clan always sticks together when one of them is in trouble, but they can't help Seth if they don't know what's wrong. Will some visitations from the

Published by Thriftbooks.com User , 18 years ago
This book is a continuation of Nora Roberts' Chesapeake Bay trilogy. I'm sure that if you haven't read the trilogy, you could still enjoy this book. However, I have read the trilogy therefore this book was more meaningful and definitly more sentimental. In the trilogy we learned all about the four Quinn brothers and their tight family bonds. This story is about the youngest, Seth. Family still plays a major role in this book. It was like meeting old friends after so many years. I was happy to see that even though the Quinns were older their personalities hadn't changed. While falling in love with Dru, Seth still has to deal with unfinished business from his past. Once again he learns that "You mess with one Quinn, you mess with them all." If you haven't read the Chesapeake Bay triology (Sea Swept, Rising Tides and Inner Harbor) I highly recommend that you do. As usual, Ms. Roberts' characters are larger than life. Enjoy.

A Return to the Shore

Published by Thriftbooks.com User , 18 years ago
Nora Roberts has returned to the Quinn family from the Chesapeake Bay trilogy, fast forwarding to the adulthood of the last "lost boy" Seth. Since the Quinns have long been friends of mine, the release of this book was much anticipated. It did not disappoint! It was delightful to see glimpses of characters developed previously in the series, and an interesting twist that they are now twenty years older. Though I'm sure Chesapeake Blue stands alone as an entertaining novel, I'm also sure it adds to this story if the Chesapeake Bay trilogy has been read.In typical Roberts style, there is strong character development, intriguing interaction, and clever dialogue. Seth was quite a character at eleven, and he's even more so in his late twenties. The storyline itself is not as intricate as some of her other work, but that also is part of the charm -- the simplicity of returning to a quiet place, to the roots of family... the symbolism of returning home.

*SIGH* She gets me every time!

Published by Thriftbooks.com User , 18 years ago
The amazing Quinn family is back! Seth, the youngest Quinn, is home for the first time in years. An acclaimed painter, who is blessed with a gift he can't quite explain, Seth is as handsome and dynamic as the other Quinns. He comes home to find things in St. Chris much the same, with the exception of lovely Dru Whitcomb-Banks, a new shopkeeper in town. Dru is not what Seth expected and he soon finds himself drawn to her, despite his unsavory roots. She's carrying quite a bit of baggage herself, but finds that she's falling for him just the same.Nora Roberts had already built a compelling family that intrigued readers through the first of the Chesapeake Bay saga, Sea Swept, Rising Tides and Inner Harbor. But in response to overwhelming reader demands (she dedicates the book to "Every reader who ever asked, "When are you going to write Seth's story?") she writes Seth to be as dreamy and decidedly alpha as the other Quinn men. Dru is a perfect match for Seth, strong willed and determined and also a bit of a lost soul. The combined traits make the couple vibrant and interesting. On top of that, you get to revisit your favorite characters from the first three books and find out what's become of them and their children. Nora's greatest gift is her ability to write a family that keeps the reader's attention.I wholeheartedly recommend this book to both first time, or habitual Noraholics! If this is your first Nora book, I suggest that you read the first three in the saga before reading Chesapeake Blue. You'll find your enjoyment of the story even greater having met the secondary characters before.Nora's done it again!
Copyright © 2020 Thriftbooks.com Terms of Use | Privacy Policy | Do Not Sell My Personal Information | Accessibility Statement
ThriftBooks® and the ThriftBooks® logo are registered trademarks of Thrift Books Global, LLC