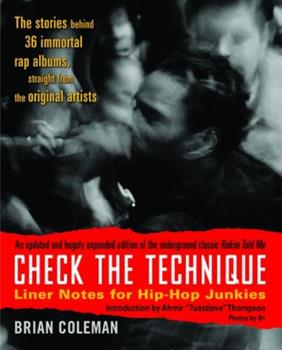 A Tribe Called Quest - Beastie Boys - De La Soul - Eric B. & Rakim - The Fugees - KRS-One - Pete Rock & CL Smooth - Public Enemy - The Roots - Run-DMC - Wu-Tang Clan - and twenty-five more hip-hop immortals It's a sad fact: hip-hop album liners have always been reduced to a list of producer and sample credits, a publicity photo or two, and some hastily composed shout-outs. That's a damn shame, because few outside the game know about the true creative...

Published by Thriftbooks.com User , 12 years ago
This is a great book for all hip hop junkies. There is a lot of information on how groups were formed, and stories behind all. I got this book, because I'm big on hip hop. I wanted to do some reading on the history of all the great hip hop legends that you don't hear much of nowadays. I really recommend this book for anyone who's into the old school underground hip hop. You'll love it!

Published by Thriftbooks.com User , 13 years ago
For all of us who grew up in the Golden Age of rap, the 80's and early 90's, Check The Technique is a must read. When these ground breaking albums broke, I was starved for information on how these artists began and found their inspiration. This book enlightens the reader to the rap scene of the time period, and truly provides an insight into what drove these artists to produce the best rap ever, and consequently inspire other artists around them. Though not all of the major artists and infuences from the time period are covered, the albums that are are the foundations of rap that many of today's artists would be well served in reading this book and getting back to the roots of the most important genre of music in the past 50 years.

A treasure trove for hip-hop heads

Published by Thriftbooks.com User , 13 years ago
Huge, ludicrously detailed accounts of the creation of pretty much all the most important albums in my life circa seventh grade. Warning: read near your stereo so you can put these back on as you read about them. You'll want to.

Published by Thriftbooks.com User , 14 years ago
I bought Mr. Coleman's 'Rakim Told Me' when it first came out and was very impressed, so naturally I was excited when I heard he had an expanded volume in the works. This book is a true gem for real hip hop heads looking for anecdotal stories on the histories of their favorite groups/albums as well as an impressive examination of the many facets of the creative process as told by the artists themselves. This book is also a must for anyone with aspirations to make hip hop music, as it shows that there is much more to creating a classic album than simply rhyming 16 bars over a hot beat. Blood, sweat and tears; as well as lots of luck and a healthy dose of serendipity also play a major role in making an album come together in the right way. But, as essential as this book is, it's not without its disappointments. Sometimes Coleman gets artists to focus on albums that don't actually represent their best work. Examples: The Geto Boys discussing 'We Can't be Stopped' instead of 'Grip it on That Other Level'. Or Redman's rather shallow examination of 'Whut? Thee Album' when 'Dare is a Darkside' would have been a much more interesting read. And I would have much rather seen the Beastie Boys explain their masterpiece 'Paul's Boutique' instead of 'Check your Head'. But these are minor quibbles. Much more glaring is the ommission of the brilliant Ultramagnetic MCs chapter concerning 'Critical Beatdown' which was one of the highlights of "Rakim Told Me" but is inexplicably absent from the new volume. Of course, there are also classic albums that didn't make the cut for whatever reason. I would have loved to have seen a chapter on Black Sheep's 'A Wolf in Sheep's Clothing' or Ice Cube's 'Amerikkka's Most Wanted'. Alas, like Mr. Coleman says, you can't please everybody. But all the nit-picking complaints are totally overshadowed by the excellence of the book on a whole. Many of the interviews are truly eye opening and reveal details about albums and artists that one would have never guessed or imagined. Who knew that Jarobi was absent from most Tribe Called Quest recording sessions because he was more passionate about the culinary arts? Or that NASA had to issue an official statement saying Sex Packets weren't real? The book is full of bizarre tid-bits like these and they're what make the stories great. The artists themselves are completely candid and (for the most part) check their egos at the door. Oftentimes you get the feeling this may be the first time they've ever sat for an interview and been totally forthcoming without having to be "on" or in character. It's refreshing to see your favorite artists, who in the past may have seemed mysterious or larger than life, be revealed as regular Joes. Props to Mr. Coleman for having the passion to see this project through and providing all us fans with an original and essential hip hop document. And hopefully Volume 2 won't be too long in coming.

Shining Up The Brightest Diamond, Making It World Class

Published by Thriftbooks.com User , 14 years ago
"Rakim Told Me" was a sparkling introductory EP -- this is the triple CD set of utter journalistic brilliance. If you already own the blueprint ("Rakim") and don't think you need to add this fantastic construction to your collection, you are missing out on some of the best real-music reporting and analysis, ever. Way up there with the best of Tosches, Sante, the Ego Trip books, "Can't Stop Won't Stop," and many others of my very favorite books of all time, Mr. Coleman has crafted a prime jewel of You Are There and What This Means writing. But unlike recent unedited hack oral histories, he embeds the situations in actual narrative and extrapolates coherently about everything that went down. If you love hip-hop and are a fan of pop music writing but wonder why it never gets on the inside, here is your chance to dig into the one book (I think) that really does. A major ahcievement.
Copyright © 2020 Thriftbooks.com Terms of Use | Privacy Policy | Do Not Sell My Personal Information | Accessibility Statement
ThriftBooks® and the ThriftBooks® logo are registered trademarks of Thrift Books Global, LLC