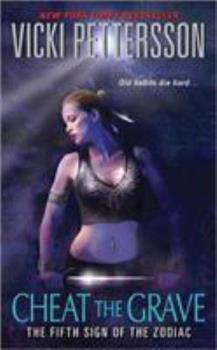 Cheat the Grave: The Fifth Sign of the Zodiac

(Book #5 in the Signs of the Zodiac Series)

"[A] very exciting series...it'll keep you up past your bedtime."--Charlaine Harris, New York Times bestselling author of the Sookie Stackhouse novels Return now to the battle between Shadow and Light being fought in the dark, unseen corners of "Sin City" Las Vegas. The fifth book in Vickie Petterson's New York Times bestselling Signs of the Zodiac series, Cheat the Grave follows newly mortal Joanna Archer on her most chilling adventure of all. Are...

Published by Thriftbooks.com User , 12 years ago
Of all of your friends, if you had to choose one to gift with super powers who would it be? Who would you think deserves super powers? Who would you trust? Everyone knows a 'Joanna Archer'. She's the friend that has 'issues'. You like hanging out with her but she tends to lean toward the negative. Got a confrontation? She's your girl. Want a fun night of movies and popcorn and painting toes, you know to leave her out. We tend to expect our heroes to be true blue, dignified, centered, unflappable, selfless and focused. Bad guys beware! We want them larger than life; better than life. We don't expect them to be 'Joanna Archer'. That's what makes these books so maddeningly fun. Joanna has had a rough time of it starting quite early in her life. Give her a minute and she'll let you know how pissed she is about that, how it has changed her, how she wishes for the person she might have been. Don't we all? Then life just keeps on coming. We want our heroes to take it all on the chin, stiff upper lip, rise above, but Joanna Archer is a real person with real pain and is hoping for just one day that doesn't involve fighting for her life. Sure super powers sound great in theory, but really consider what that would mean and I dare you to come through it better than Joanna Archer. In this 5th book Joanna faces everything that has made her who she is. She stares into the truth of herself and does not back down. She makes her choices for herself alone. The worlds she travels, the things she sees, the things she is forced to do would unravel you or me. But she is Joanna Archer. She is resolute, stubborn, focused, selfless and against her better judgment, a true blue hero. Bad guys beware.

Always fun and full of action

Published by Thriftbooks.com User , 12 years ago
I'm a comic book geek. The comic book themes of this series have been intriguing to me since the very beginning. It's not a stand-alone novel though. You do need to have read the rest of the series. The 4th book was difficult for me to read. It seemed at times completely disjointed, and I almost didn't get this one. I'm very glad I did though. It flows easily, and the action was constant. I would really love to see a tv series made off these books or at least one set in this world. If you are new to the series, there are two sides, light and dark warriors in many of the major cities fighting a war that mere mortals never see. Supposedly, there will be a savior, born to both light and dark who will bring balance. Joanna Archer is supposed to be that savior. The stories are set in Las Vegas. There are strong comic book elements, in fact, Jo refers to herself and other people on the side of light as superheroes. They can't fly, but they are near indestructible, very strong and fast, with senses that are far beyond mere human. The comic book themes instead of the more usual types of magic make this series stand out from most urban fantasy. It's very good world building, and while it can be termed paranormal romance, it's not just romance. It's one of the few series I read in this genre that I would happily recommend to my husband.

Published by Thriftbooks.com User , 12 years ago
Cheat the Grave is stellar addition to one of the most unique, ambitious and vivid urban fantasy series on the market. Following the portent by trying to avoid it; "Fifth Sign: the Shadow binding with the Light," Joanna Archer discovers what happens when you blend light and shadow to create a new, more balanced reality in shades of grey. Masks are stripped away. Agents shift alliances and grandstand for relevance and there is a new cast of characters including an exceptional individual with wholly unique powers and purpose the like of which I don't think has been seen before. Cheat the Grave is the most philosophical installment in the series and perhaps that is part of the reason I found it so satisfying because it afforded readers the chance to truly weigh and consider all of the elements that have brought Joanna to this point. One of the mantras in Cheat the Grave is "Losses aren't bad things in themselves. Not as long as you remain open to new sensation." For much of her life Joanna has been a survivor, shaped by events and the choices of others - in the past, the answer for Joanna would have been live up to the destiny that others say is her raison d' etre but now her fate is clearly driven by her own free will and in making this choice, we have a heroine whose power springs from the well of free choice and Joanne owns it all. Readers should know that there are elements in this installment that link back to Zoe Archer's short story The Harvest which was published in the anthology Holidays are Hell. While the events in that short story are not absolute required reading to follow some of the developments in Cheat the Grave, they do enhance the content and I strongly recommend reading it as a supplemental to contextualize and add dimension. Vicki Pettersson's writing continues to evolve and impress me by the scope in which she is constructing this series; it is nothing short of epic and her writing is subtly elegant and focused in the delivery. This is a rare balance and much of what makes the Zodiac series such a compelling read. The only thing missing in this installment was a trip to the Master Comics. The story didn't really lend itself for Jo to stop in and catch-up with the gang at the shop but I did miss them. Hopefully Jo will take a visit to Master Comics in the next installment in the series. Cheat the Grave is a rich and wonderfully satisfying addition to the Signs of the Zodiac series... in fact, I think it's the best installment yet in a series that continues to evolve and challenge.

Best book of the series yet!

Published by Thriftbooks.com User , 12 years ago
I'll keep this short and light to avoid any spoilers... and leave the other reviews already here to handle the summary of this book, and merely just add my two cents on why this is, hands down, the best series ever. book 5 is exceptional, and the best so far. i usually find, that with time, a series can become a tad stagnant. and although you love the characters you're following year after year, sometimes they can become a bit irritating because there often isn't any growth, and the story lines can seem a bit recycled. Vicki has the most original story i have had the pleasure of reading. you are doing yourself a disservice by not picking up all 5 books at once (trust me, you'll be THAT pissed off at yourself for having to waste precious time to stop at a book store again to pick up what you left behind... i did that after i started book 1 last year). every book gets better, and like i read in an early review, this is a real game changer. i rated this book 5 stars because it's just the best of everything: writing, plot, character development, etc. if you're new to the series, please start at book 1. if you've already read through 1-4, you gotta pick up 5. eagerly awaiting book 6... and by eagerly, i mean agonizing over the many months we have to wait for it.

Published by Thriftbooks.com User , 12 years ago
I have a confession, I am a VPeep, yes that's right. I am a Vicki Pettersson fangirl. It's partly because she is a Vegas girl and I love that connection in her stories, but also because she writes dark urban fantasy and I love it. She isn't afraid to torture her characters or break the rules for the sake of the story. The last book in the series was shocking and turned the series upside down on its head. The main character, Joanna, was forever changed to the point that many thought the series was over with.. Yet, the series isn't over and Pettersson returns to torture us, and Joanna, in the fifth installment of the Signs of the Zodiac series, Cheat the Grave. The Signs of the Zodiac series feature not vampires, or werewolves, or any other typical supernatural character.... but instead modern super heroes. The world is made up of Agents of Light and Shadow, battling to keep the world balanced with the events being recorded in comic books, known to the agents as manuals. Our main protagonist is Joanna, an Agent of Light, mostly. Her mother was Zoe Archer, the Sagitarrius Agent of Light while her father was the Tulpa, the evil genius in control of the Shadow Agents in Las Vegas. Joanna Archer is tough, hard, bitter, angry, battle worn, and alone. Abandoned by her mother and practically disowned by her assumed father, she started off this series all of these things and more. When I read the first book I wondered where she could possibly go from there? Over the last 4 books she has found companionship and family through her troop and some unexpectedly inherited friends and family. She has been trained to be a deadly weapon, but she has also softened in her judgment and acceptance of those around her. She lets people into her life and get to know her and becomes a better character because of it. Yet letting people in often means getting hurt, and Joanna is no exception. Her troop has abandoned her, her lover betrayed her....she is once again alone and wondering what she has left to live for. Cheat the Grave gives us a rare look at our super heroine weak and vulnerable. Joanna is wallowing in self pity and unsure of where she belongs. This part of the book was the hardest part for me to read, I didn't enjoy it but I know it was necessary and real. I wanted to smack Jo upside the head and tell her to snap out of it - she was a tough kick ass chick, not some mopey do nothing! As a side effect, this section was the slowest for me to read and I found myself wishing things were moving a bit faster. Things picked up and the story shined for me as new characters were introduced to Joanna's world. Cast out of the Light and not willing to be Shadow, Jo is looking for some place to belong. Rogue agents, independents no longer light or shadow, make themselves known to her and she is forced to question her beliefs about light and dark. Can there be Gray and is she willing to be part of it? The Gray Agents are all interesting characters that will make you smile
Trustpilot
Copyright © 2022 Thriftbooks.com Terms of Use | Privacy Policy | Do Not Sell or Share My Personal Information | Accessibility Statement
ThriftBooks® and the ThriftBooks® logo are registered trademarks of Thrift Books Global, LLC