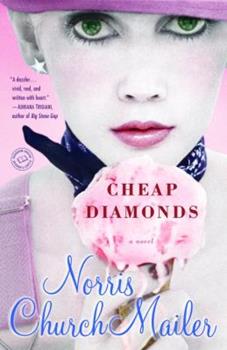 Norris Church Mailer triumphantly returns to the page with this breezy, hilarious novel of discovery and destiny. Set against the backdrop of 1970s New York City, Cheap Diamonds follows a sweet young girl from the South who risks it all to fulfill her heart's desire. Cherry Marshall seeks a life beyond the confines of her Arkansas world. "Sweet Valley was not the place for a girl with stars in her eyes, and I had stars big enough to blind me." Leaving...

Published by Thriftbooks.com User , 14 years ago
As one of a million small-town girls who came to Manhattan to follow her big dreams, it was exhilarating to read about this character's arrival in NYC in the Seventies--a romantic bygone era of Avedon, Studio 54 and a much hipper, grittier Soho. Loved the fashiony touches--patent leather gillies and burnt-orange trimmed suede hot pants (those were the days!). But this is no cookie-cutter chicklit tale. Underneath the beautiful characters and the glossy fashion world, this is also a very touching story about love and loss and I found myself in tears at some parts of Cherry Marshall's journey through her new, often confusing world. I read this author's first novel and didn't want to say goodbye to this charming, gutsy character. I'm so glad I didn't have to! I hope Ms. Mailer will be giving us a third installment of Cherry's adventures next year? S'il vous plait?

Published by Thriftbooks.com User , 14 years ago
Cherry is such an honest, God fearing, valiant girl and charming beyond everyone and everything around her that she illuminates every situation she encounters in the wonderful, vapid world of High Fashion. Norris Church Mailer is a southern writer and as such there is much in and around and under what could seem like just a great entertaining read. This is a wise and telling book. I couldn't put it down and didn't want it to end.

Published by Thriftbooks.com User , 14 years ago
This novel should come with a warning attached: Caution, Addictive! Once you're into it, forget about having any other kind of life. There you are, captured, captivated, turning the pages, unable to put it down, not wanting it to stop, and either in love with Cherry Marshall or under the illusion that she's you, or vice versa. Cherry is the delightful narrator of this lark, a Candide from Arkansas moving around in the best of all possible worlds, which happens to be the world of New York's glamorous models. And when Cherry steps back to let someone else have the spotlight, it's almost as good. The other characters are all wild and young and full of hope, ambition, lusts and beauty. Cheap Diamonds is not only a perfect summer read - it's the best way of keeping summer permanently with you.

You're going to love this book!

Published by Thriftbooks.com User , 14 years ago
Norris Mailer sets exactly the right mood for CHEAP DIAMONDS with the very first sentence. "There just simply wasn't any such place as 830 Broadway." The world of modeling, which Cherry Marshall is about to enter, simply couldn't exist: it's exciting, cheap, daunting, sleazy, top of the mountain, Queen of the World high; bottom of your dirty socks low, a Never-Never land, a tumble down a rabbit hole even stranger than Alice's, but, unbelievable as it all seems to the reader, seeing it through the eyes of "Arkansas-girl-on-her-own" Cherry Marshall, it is real. Mailer's characterization of Cherry scintillates as the the protagonist grows from gawky and inexperienced into svelte and sophisicated without ever losing the wholesome vulnerability that makes you love her in the first place. The novel is fast-paced, not even losing steam during the epistolary sequences, and the melange of colorful characters combined with the serendipitous quirks and turns of the plot make the work positively Dickensian, but every single one of those characters is thoughtfully crafted and three-dimensional--no cardboard cutouts here. As you meet them, you recognize the authenticity of humanity that Norris Mailer has given them; however, Cherry is the best of all. I promise, you're going to love her. She's the part of every woman that longs to break away and become something special, and she's the kind of girl every man would love for a companion--extra special in every way but without an ounce of arrogance in her. You don't have to have read WINDCHILL SUMMER to appreciate Cherry Marshall, but if, after you finish CHEAP DIAMONDS, you feel the need for more of her companionship, check out the first Norris Mailer novel.

Published by Thriftbooks.com User , 14 years ago
Cherry Marshall, the narrator of this novel about a tall country girl (five foot, thirteen)learning to be a big agency model, is a descendant of Huck Finn. She is naive, but not a sucker, honest, but willing to tell a fib here and there, awed by The Big Apple, but still very much in touch with her roots in the heart of the heart of the country, in her case, Arkansas. She knows how recount her adventures with frankness and humor, when to zip right along and when to slow down and savor the nuttiness and occasional depravity of the city during that time, as in the saturnalian episode at Max's Kansas City night club, where the "in Crowd" of the 1970s drank and doped and danced. Her picaresque tale delights with its pace and zany cast of 1970s characters. Two of them, Cherry's boss Suzan, and male model Lale Hardcastle, who is running away from his fiancee, also come from Arkansas and the contrasting ways they adapt to city life are instructive. It takes most of the book for them to get to really know one another, sort out their values and seize their real opportunities, professional and romantic. Besides the main characters there are a baker's dozen of others in the glamour game, and cameos by Richard Avedon, Diana Vreeland and Andy Warhol. Mailer draws on her own experience as a Wilhelmina model in depicting the whole crazy crew. There is a lot of insider baseball stuff about eyelash treatments and waxed body parts, hair styles, high boots and cloths, cloths, cloths. Remember mini-skirts and fringed vests and head scarves? The author has a brilliant sense of color, not only for the hippie and high fashions of that period, but for the varied hues of the city itself. There are also several excellent scenes set back home in Sweet Vally, AK. It is a lively tale and wonderful stroll down memory lane.
Trustpilot
Copyright © 2022 Thriftbooks.com Terms of Use | Privacy Policy | Do Not Sell My Personal Information | Accessibility Statement
ThriftBooks® and the ThriftBooks® logo are registered trademarks of Thrift Books Global, LLC