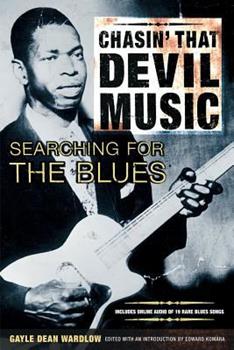 Chasin' That Devil Music, Searching for the Blues: With Online Resource [With 15-Song CD]

(Book). Chasin' That Devil Music Searching for the Blues presents the results of extensive research by a blues scholar who has researched the artists on old 78 RPM records to uncover their stories. Includes rare interviews and the actual songs which available online using the unique code printed inside each book.

Published by Thriftbooks.com User , 13 years ago
Wardlow tells his researching story, so it is not a chronological history book of the Delta Blues, it is devided by research types, for instance a section about finding documents , and a section about interviews. Yet it gives finally good tools to know about the Delta Blues big picture. Young Delta Blues fans who for instance are not aware that there were a question how many people by the name of Willie Brown were at the same place and time playing Delta Blues, it is not only good introduction of the question but also the possible answers. I have this book about a year or two and I keep coming back. It is essential if you are really a Delta Blues fan who wants to extend the knowledge about the Delta Blues and it's history, this is the first place. It can serve as appendix to any article or book about the Delta Blues, so when reading other stuff, coming back to this book is going to be a ritual for anyone having this book.

A Valuable Piece for Blues Fans

Published by Thriftbooks.com User , 19 years ago
I agree with Lampic's review in that the author comes across as egocentric while compiling the history of the Mississippi Delta blues, offering some inappropriate and disrespectful comments while interviewing seventy-five-year-old bluesmen. Regardless, the content of this book is very important and valuable to anybody who is as passionate about the music from this era as me.We are all familiar with Robert Johnson, Charlie Patton, Skip James, Muddy Waters, John Lee Hooker, Elmore James, and Son House. These names give us the true definition of Mississippi Delta blues and have now obtained a well-deserved legendary status, becoming subjects of countless music compilations and biographies. But they weren't the only blues singers from the Delta. The author recognizes this and gives us strikingly vivid and detailed accounts of the lives and contributions of the lesser-known bluesmen; namely, Ishmon Bracey, King Solomon Hill, and Tommy Johnson (although Tommy Johnson has recently been a subject of intrest after the "O Brother, Where Art Thou?" phenomenon). These men have long been overlooked and their music was shadowed by that of Skip James and Robert Johnson during the blues revival of the 1960s.One particularly interesting portion in this book is the re-examination of Robert Johnson's death, which has been the subject of many-a-legend. Wardlow rehashes the search for Johnson's death certificate and offers his own ideas, based on his own research and interview sessions, about how Johnson really died.We also learn the fates of many of the other performers, which is often heartbreaking--these men are my heroes, and it's so sad to learn that many were victims of alcoholism and extreme poverty.The accompanying CD is an excellent item indeed. Not only do we have audios of Wardlow's interviews, but many previously unreleased (or thought to have been lost) recordings from Skip James, Tommy Johnson, King Solomon Hill, and Ishmon Bracey (among others). What's even more remarkable is that these came from Wardlow's own private collection of blues 78s--I'd love to see this guy's record library!Wardlow also includes an extremely comprehensive discography for each bluesman, arranged by catalog number for Paramount and Yazoo. This list alone is worth the price of the book--I now have a basis for building my own collection (although I tend to stick to the cheaper and less fragile CD releases, rather than trying to track down the original 78s!)If you look beyond the writing style and the occasional arrogance, this book is excellent for its historic information and accompanying music collection.

The mystique of early rural blues

Published by Thriftbooks.com User , 20 years ago
This book IS a reprint of previously published articles, not all of them written by Wardlow (for instance, an interview with Wardlow by other reporters is included), but apparently most of these articles have never appeared in book form. They are fascinating for a reader interested in learning more about how people like Charley Patton and Robert Johnson, long dead, are more celebrated today than would have been imaginable, let alone possible, in their own times. Wardlow was one of the early "investigators" who unearthed obscure recordings and salient information about the musicians who made them. This book is largely an account of that difficult process. Now, when it's relatively easy to hear the complete recorded works of Son House, Blind Willie Johnson, et. al., it's hard to imagine what blues fans had to go through to hear this music 40 years ago. Wardlow's book is a revelation and an inspiration also. The "free" CD is wonderful, too, and worth the price of the book itself.

Published by Thriftbooks.com User , 21 years ago
Gaylon is one of the world's top authorities on pre-war blues and his book is true masterpiece. After collecting for 25 years I still learned a lot from this great book.

Published by Thriftbooks.com User , 21 years ago
I praise this remarkable book as a biased reader. I've had the great pleasure over the years to discuss early blues research projects with Mr. Wardlow, a fine Southern gentleman. It is no exaggeration to say that we would know far, far less about the details surrounding the early recordings of our pioneer Delta blues musicians without his field research. He began his search in the early 1960s when many elderly blues artists, or associates and relatives, were still alive. This book details his amazing journeys into a mysterious world. He kept these details from being lost forever. As blues (like jazz) becomes part of our academia, Mr. Wardlow's work will become more recognized. This book isn't a rehash/compilation of previously published material. Wardlow is a research hound like no other. Read this book and then take it with you down Highway 61 through the Delta. You will be overwhelmed.
Trustpilot
Copyright © 2022 Thriftbooks.com Terms of Use | Privacy Policy | Do Not Sell My Personal Information | Accessibility Statement
ThriftBooks® and the ThriftBooks® logo are registered trademarks of Thrift Books Global, LLC