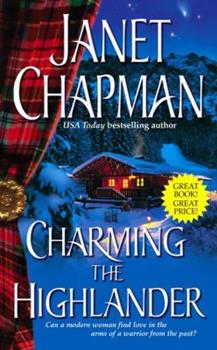 Published by Thriftbooks.com User , 5 years ago
A must read book you start at this first one and you have to read them all Janet Chapman does such a Great job on these books love them!!

Published by Thriftbooks.com User , 15 years ago
I wish I could give it 10 stars! What a delightful book!! I want my own highlander lol! Cant wait to read the rest of the series!!!

Best of the Highland Stories!

Published by Thriftbooks.com User , 15 years ago
I never usually say a series of books is so far superior to another but on this I must differ. I never had so much fun reading about the group of Highland warriors. Normally, the Highlander books that I read are boy sees girl, girl runs away from boy, boy gets girl, girl resists boy, and surprise,(yeah right!) romance and a happy ending. True this book might be slightly similar to this formula but there is an attraction between the characters right away. Janet Chapman has made the MacKeages and Michael McBain extremely likeable. They are not overly mushy or extremely barbaric. She explains how 12th century men are able to survive in the modern world. Originally, I thought that Daar was going to be an evil wizard. (I read enough of those stories!) However, Daar became part of the gang and helped the Highlanders out. I am slightly disappointed with Grace. I felt that she should have been written to be a much stronger female due to her intelligence and independent nature. She should have at least played hard-to-get. However, I was thrilled to see a female character who was an extremely intelligent woman. My ever so slight disappointment with Grace was not enough to affect my rating. I still liked Grace. I fell in love with the MacKeage Clan and Michael McBain. I even fell in love with Daar. He seemed to be a mischief maker. He shocked Grace a few times. After all, she thought that he was a full fledged priest. I cannot wait to read the rest of the series. I can only hope that they are as entertaining as this one. I highly recommend this book!

Published by Thriftbooks.com User , 19 years ago
The book starts off, on the sad side, as our heroine Grace Sutter, is at the bedside of her younger sister Mary, who was in an accident and just delivered a baby. In her last dying breaths, Mary tells Grace, the rocket scientist, the incredible story of why she had fled the baby's father; and makes Grace promise to bring the baby back to his father who is all alone in the world. Further she is to promise to sprinkle Mary's ashes on their childhood home on Tarstone mountain on the day of the summer solstice which is four months away. Taking a sabbatical to grieve and care for `Baby' Grace travels home during a winter ice storm. The charter plane crashes into a mountain but Grace, the baby, and another traveler, Greylon MacKeague survive the crash and through superhuman effort, Grey is able to bring both Baby and Grace, to safety. It is of course, no consequence that Grace and Grey have met or have this incredible `lusty' attraction to one another - very sensually described! Also, in the background you have this delightful wizard who cast the spell (after a few mishaps) that brought this 12th century warrior, along with a few others that were not necessarily planned for, to the 21st century to find Grey's soul mate who would bear the child, that would one day be the wizard's heir. Grace, in the meantime, has secrets of her own and continues the deception that the baby is hers, while trying to determine if the Baby's father is sane enough to raise the child - being a scientist, Grace does not believe in time travel! Discovering that the baby's father is an arch- enemy of Grey's makes the complications of her attraction to Grey and growing love of `Baby' all that more heartbreaking. The relationship between Grey and Grace as the scientist, comes to terms with this purely alpha male is divine. What I found unique in this book was that the 12th century warriors had four years to become acclimated to modern day life prior to the time period the story takes place in. As such, you didn't have the normal `awestruck' behavior that most time travel books would depict. This initial offering from a new author was very charming and sensual and I look forward to the sequels as Grey's band of `merry men' get on with their lives in the 21st century. Excellent read, fast moving, humorous and intelligent. Bravo on this first book from an author who I predict has a very bright future!

Published by Thriftbooks.com User , 19 years ago
In 1200 AD during a clan battle in the Scottish Highlands, a wizard casts a spell that sends several MacBain and MacKeage warriors into the twenty-first century. The ten time travelers include the MacKeage brothers Greylen and Morgan. A pregnant Mary Sutter fled her lover Michael MacBain when he insisted he was born in 1171. She stays with her sister Grace in Norfolk before deciding to return to her beloved Michael. Instead she dies in a car accident. She gives birth to a son, makes Grace promise to take the child to Michael, and asks for her ashes to be spread in Maine.Rocket scientist Grace receives a sabbatical to complete her sister's dying wishes. Flying over Maine with one other passenger besides herself and her nephew, the plane crashes killing the pilot. The other flier Greylen keeps Grace, who he recognizes as his soul mate, and the baby alive by using all he learned in the highlands almost a millennium ago in real time, but not too long ago in his biological time.This engaging time travel romance occurs after the displaced Highlanders have some time to adapt to their new environs. Still the audience observes the discomfit of Greylen when he flies on the commuter plane as this goes against all he knows (if God wants man to fly he would have given him wings attitude). It is this type of detail to the feelings especially of the lead couple that turns this into a delightful tale.Harriet Klausner

Published by Thriftbooks.com User , 19 years ago
I bought this book on a whim at my local bookstore and I loved every last page! Being a Mainer myself, I was thrilled to find that the story was located in my "backyard", so to speak. The main characters, Grace Sutter and Greylen MacKeage are wonderful. Grace, a rocket scientist, has just lost her sister in an automobile accident and now has the care of her sister's infant son. Her sister tells her on her deathbed that the baby's father is a Scottish Laird who was born in 1171...needless to say, she is unbelieving. She makes a promise to her sister to bring her baby to his father, all the while wondering if this man is sane or not.On her journey to her sister's home in Maine during an ice storm, her plane crashes and she is thrust, literally, into the arms of Greylen. Little does Grace know, but Greylen is also a laird, sent through time to find his true soulmate. Grey realizes Grace is the one the minute he lays eyes on her. The rest of the book is played out on TarStone mountain with a host of amusing characters. The ending is true and endearing.What I loved most about this book is the reality of the situation. Big, burly Scottish men always get me but these characters were sensitive, lovable and true to life.Ms. Chapman also chose a familiar setting and time for the book. Back in 1998, here in Maine, we had the "storm of the century". Ice fell from the sky, covering everything. For weeks we were all without power. For her to use this storm in a positive way was wonderful for me. I cannot wait for her next book!!!
Trustpilot
Copyright © 2022 Thriftbooks.com Terms of Use | Privacy Policy | Do Not Sell My Personal Information | Accessibility Statement
ThriftBooks® and the ThriftBooks® logo are registered trademarks of Thrift Books Global, LLC