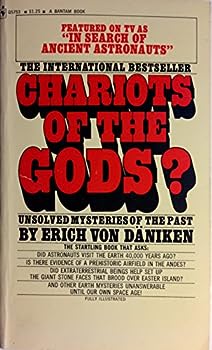 Chariots of the Gods?

AS SEEN ON ANCIENT ALIENS' "THE ALIEN PHENOMENON" Now in a beautiful 50th anniversary edition with a new foreword and afterword by the author, this is the groundbreaking classic that introduced the... This description may be from another edition of this product.

Published by db , 2 months ago
Aside from the permanent worn crease on the back cover, there is underlining and highlighting all through the book! I would not have bought it if it was disclosed it was marked up!

Published by Thriftbooks.com User , 13 years ago
This book is absolutely fascinating. It is extremely well researched and full of interesting details, facts and a critical analysis by the author of world mysteries that would make even the most skeptical wonder "what if". What is especially nice is that the author leaves us with a series of questions on which to ponder rather than trying to force his own view on the reader. It is no wonder that this book has maintained its appeal throughout the years. The only negative in my view, is the photos. Being in black and white they are a little difficult to view but this may be so because that was what was available when the book was first published. Moreover excellent copies of the similar images can be viewed on the internet.

A Real Gem and Fun to Watch!

Published by Thriftbooks.com User , 15 years ago
A film that makes you go 'Hmmmm'. I first saw Chariots of the Gods in a theater as a kid when it was re-released back in the mid Seventies. I remember having trouble going to sleep that night! Since then I have attained a degree in science, and still think that it has much merit. Sadly, this is a film that few people seem to be able to see anymore, at least I haven't noticed it making the rounds on mainstream television or cable in the last twenty five years or so. The transfer was excellent and made from a well-preserved print. I noticed few flaws in this thirty-five or so year old film. There is an extra of pictures, but there are only like eight pictures? Why bother? That part was like a carnival sideshow ripoff. Also, the bio on von Daniken is a short text of one page and was not informative at all. There are scene selections and true to their word a movie trailer. The film is an interesting whirlwind of exotic location shots that if nothing else shows the viewer some very interesting sites. The musical score is hard to describe-in a sense it is eerie, but it also has an overall upbeat, 'hopeful' or optimistic tone. I get the impression that this film was not made originally in English? I do like the narrator's (male) voice and keeps your attention. There are also a few places where the narration is handled in an interesting manner. Also, the actual filming and editing was excellent and well thought out. It's as if there is a new surprise awaiting you around every corner. The documentary also includes some support from a couple of other individuals, one of whom was a Soviet scientist and I found this to be rather interesting given the times. But I feel that von Daniken's arguments supported by the visual evidence were more than compelling on their own. I can't help but to compare this film to a Nova episode that dealt specifically with von Daniken's book and thus many of the things in this film. A few things, at least in the book, were shown to be out and out fabrications. I seem to remember Nova trying to provide an alternative explanation for such things as (don't quote me...been many years) the 'Baghdad Batteries'. Since then I have seen these batteries presented as being exactly as what they appear to be by science-ancient batteries. In fact, it seemed that the makers of the Nova film were in an Okham's Razor competition with von Daniken in trying to provide rational, simple explanations for rather exceptional ancient works of art, stories and artifacts. I think it was mostly a tie. 'We' still don't know how or why the Pyramids, nor Stonehenge, the Nazca Lines nor many many other things were built in ancient times. Shame on von Daniken for not giving our ancient ancestors very much credit for coming up with these technologies themselves, but the same can be said for mainstream science which seems to be more and more in the position that ancient peoples were more advanced than we thought and much earlier in ti

Published by Thriftbooks.com User , 18 years ago
Although they seem a little far fetched, especially in this consumerist world where one will only believe that which is placed in front of him as "proof", I highly enjoy reading Erich Von Daniken's theories relating to the possible origins of human civilization. I mean think about it for a minute, what if the theories were in fact, true? Would you then believe?Von Daniken's first book "Chariots of the Gods?" fascinated me when I read it in high school, not because of his writing style (which he really should have worked on), but rather the fact that it was putting out new ideas which were completely "taboo" at the time. Yes, the UFO craze was in full force with everyone, and their mother writing about "visitors" from "spaceships" doing everything from experimenting on humans to impregnating females, but this was the first time that someone created a theory that human civilization could have indeed been founded by these ancient "gods" in their "flying machines".I'm not saying that any of it is true (nor his other works), but I get him credit for creating a theory that would go on to influence everyone from Graham Hancock to Robert Temple. Pick this up, and read with an open mind.

Published by Thriftbooks.com User , 21 years ago
The 1960s and the 1970s produced an alarming amount of attention on "unsolved mysteries" such as the Yeti, the Bermuda Triangle, the lines on the Nazca plains, as well as UFOs. Tons of books and documentaries and TV shows focused heavily on this though many seemed just a little trite. Enter Erich Von Daniken...I was only 12 when I read this and was able to understand much of it with help from my Webster Concise Dictionary. Today, reading this new edition with a new forward from the author is just as mind opening when I first read my old used tattered paperback. I still think people dismiss the author's intentions to put a light on a theory that we are the result of a union between advanced aliens and primative man. I believe the intention was to take a back step from what is normally understood about creation and discovery. The evidence which Erich places before you should not be dismissed so easily either. CHARIOTS OF THE GODS really makes you THINK about how a primative race might carve images which resemble spacemen. Is this why when man thinks of God...we look up to the sky?I HIGHLY recomend this book to anyone who wants to see what might have happened in Earth's early years.
Trustpilot
Copyright © 2022 Thriftbooks.com Terms of Use | Privacy Policy | Do Not Sell or Share My Personal Information | Accessibility Statement
ThriftBooks® and the ThriftBooks® logo are registered trademarks of Thrift Books Global, LLC