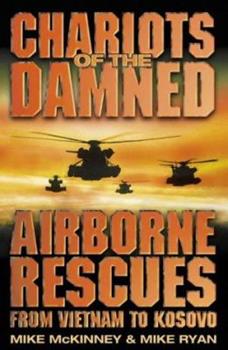 Chariots of the Damned

by Mike McKinney and Mike Ryan

When F-16 pilot Scott O'Grady was shot down over Bosnia, a rescue mission was launched immediately. It involved nearly 100 aircraft, but succeeded in plucking him to safety in broad daylight. The... This description may be from another edition of this product.

Published by Thriftbooks.com User , 20 years ago
This is a great book about special operations, and their behind-the-scenes people, like the people who get the special forces in and out. The book describes in detail, the planning, and execution of real life helicopter special operations with detailed maps, and dramatic pictures

Published by Thriftbooks.com User , 20 years ago
First the BAD; the authors commissioned a superb painter to render battle scenes, however for 1983 Grenada they fed him wrong information as he depicts marines running out of CH-46E helicopters wearing Kevlar helmets and M249 light machine guns when only the 82nd Airborne Division Paratroops wore the new "fritz" helmets during Operation Urgent Fury, the M249 "SAW" wasn't even in U.S. service until 1985 and it was U.S. Army Rangers who deployed from the CH-46Es to rescue the medical students at the Grand Anse campus (errors also on pages 194-195). The painting looks like a bad rip-off of Navy artist Mike Leahy's depiction of the 1983 invasion. It even has a marine firing a M72 LAW rocket with backblast ready to fry some other marines running out of the "frog" helicopter. A bunch of fantasy. The GOOD is that the book does show how helicopters have been shot down/destroyed when they are unarmored like marine AH-1 Cobras were in Grenada (and still are today) or when they try to do something stupid like land in broad daylight on an enemy-held beach like marines directed USAF HH-53s to do on Koh Tang island in 1975 or when a marine pilot flew into a fuel-laden EC-130 at Desert One in 1980. The book also shows promise for the future with the AVPRO EXINT people pods which could make the useless for Close Air Support marine AV-8B Harrier II vertical take-off/landing jet (needs running take-off to carry decent bombload, burns fuel too fast to remain overhead to support friendly troops, fuel tanks and exhaust nozzles co-located, unarmored) play a vital role in downed pilot rescues---since the longer the delay, the more enemy troops converge around the man (or men) in jeopardy. The book in the futures section is reminiscent of General David Grange's "Air-Mech-Strike" study group proposals since it depicts possible new rotary-wing V/STOL aircraft designs to get higher speeds like the stopped "X" rotor and canard wing. If you read the book with a sharp eye to pinpoint factual errors there is more good here than there is bad to lead you astray; perhaps those that take V/STOL aircraft into combat with intelligence (not hubris) and unpredictable plans are not "damned" after all?

Published by Thriftbooks.com User , 20 years ago
In a world dominated by fixed-wing war story books it's great to finally see a book that recognizes all the great selfless deeds of helicopter pilots. The book covers all the major "special" missions attempted american forces with the use of the helicopter; from the first CSAR mission late in WWII to the phenominal rescue of Scott O'Grady in Bosnia in 1995. Recommended read for anyone interested in America's Special Forces operations

Published by Thriftbooks.com User , 20 years ago
Based on the title of this book you probably know what you are going to get, exciting stories of American military special operations over the past 30 years. The book delivers just that. We get basically a rundown of the major American military operations over the past 30 years with a view of how the helicopter forces have been used. The authors focus on the missions and detail out what took place, the good and the bad. The real interesting parts for me were the explanations of the Panama, Grenada and Kosovo missions, as I did not have a good understanding of the efforts that took place there. The authors also throw in a good amount of technical information about the helicopters, the way the missions are planned and the upcoming helicopter technology. The only two issues I had with the book were I felt the authors could have given me more details - beef the book up a bit. Secondly you can really tell the difference in skill between the professional author and the military man. Overall it was a good book that was easy to read. It would be a good primer to any of the conflicts detailed in the book.
Trustpilot
Copyright © 2022 Thriftbooks.com Terms of Use | Privacy Policy | Do Not Sell or Share My Personal Information | Accessibility Statement
ThriftBooks® and the ThriftBooks® logo are registered trademarks of Thrift Books Global, LLC