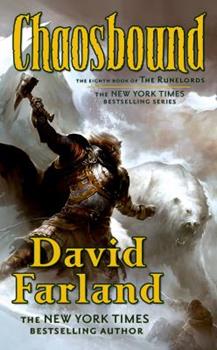 Chaosbound: The Eighth Book of the Runelords

Borenson is set on a quest to save the devastated world from certain destruction. But the land has been altered forever: in the change, Borenson has merged with a mighty and monstrous creature from the other world, Aaath Ulber, and he begins to be a different person, a berserker warrior, as well as having a huge new body. Thousands have died, lands have sunk below the sea and elsewhere risen from it. And the supernatural rulers of the worlds are part...

Published by Thriftbooks.com User , 11 years ago
I started Runelords years ago and thought it would be a three or four book series. At first I was repelled by on of the biggest aspects of the universe Farland created, blood metal. But he wrote about it in an overall humane and thoughtful way. And the series really has become 'epic' in terms of how many characters have come and gone and all the events you have experienced if you have read all of the books. In some ways this book was a 'breather' but it was a welcome breather. It concentrates on Borenson and his family after the merging of the two worlds. You get a breather from Daylan and Gabon's sons. It is an interlude but I found it compelling and satisfying. I can understand a bit of the criticism in the other reviews, but I give it 4 stars because it was a thoroughly enjoyable read and I felt in no ways 'cheated' by the events it concentrated on or the length of the book. However even though I did not feel cheated, the main course of events are left un-touched upon and I agree with another review that could bother some people especially at the hardback price.

Published by Thriftbooks.com User , 11 years ago
Excellent continuation of the story. If you liked the prior books in the series, you'll like this one.

Published by Thriftbooks.com User , 11 years ago
I was initially disappionted that the story focuses on Borenson and Family instead of Fallion. Hoever, after reading it, I realized that the Borenson's role adds nicely to the story/plot. My only gripe (and this is about the prior book as well) is that the book is only 350 pages of large type print. I read 100 pages a day just on my 1 hour total train commute to/from work. The point being is that the story is excellent and definitely worth reading for fans of the series, but please wait for the paper back. The hard cover is not worth the money. In contrast, I just finished reading the excellent "The Gathering Storm" by Robert Jordan/Brandon Sanderson which was the same price and more than twice as long. Thanks

Published by Thriftbooks.com User , 12 years ago
Flameweaver Fallion Orden continues his struggle to consolidate the splintered One World before it is too late following recent harrowing fights by his allies to rescue him from Lord Despair (see The Wyrmling Horde). Two of his supporters, warriors Borenson and Myrrima have no time for respite though they could use some. Fallion has used some magic in a desperate ploy for a super warrior on a critical quest; he consolidates into one warrior Borenson with berserker Aaath Ulber, a horned giant from the other side. However that amalgam proves to be a two edged blade. While Myrrima observes in horror and angry helpless understanding, Borenson increasingly loses much of his human essence with each passing moment while undergoing mission impossible to be Fallion's prime tool to unite humans against the wyrmlings. The Eighth Book of the Runelords is a profound fantasy that explores deep complex philosophical themes of what is a human, when does honor and patriotism turn myopic, and finally when does the sacrifice of another go too far. To fully grasp the complexities of the Farland universe, it is imperative to read the previous three books (see SONS OF THE OAK) that make up the second saga as each leads to the next. Not for everyone, though there is plenty of action as expected when a berserker runs wild, CHAOSBOUND is still a deep reflective tale with timely applications our world. Harriet Klausner
Copyright © 2020 Thriftbooks.com Terms of Use | Privacy Policy | Do Not Sell My Personal Information | Accessibility Statement
ThriftBooks® and the ThriftBooks® logo are registered trademarks of Thrift Books Global, LLC