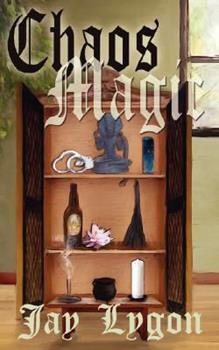 (Book #1 in the Gods and Chaos Series)

Sam's job as a film critic is just starting to take off, even as his personal life is crashing down around him. His relationship with Marcus, god of fear, turns out to be a horrible mistake. Sam knows just enough about how the gods work to keep his head above water until he meets the Dom of his dreams, Hector.

Published by Thriftbooks.com User , 12 years ago
Warning: This review might contain what some people consider SPOILERS. Rating: 7/10 PROS: - The story has a clever, unique element I haven't encountered before. It's like a modern-day Greek story in which gods and goddesses interact with people and have human characteristics. - This is one of those rare instances when I feel that BDSM is a necessity for one of the characters rather than just something he does because he thinks it's hot. Sam has trouble keeping his emotions and thoughts in check, and being dominated gives him relief from that. - The characters certainly aren't perfect, fairy-taleish, utopian men with no problems and unrealistically sweet personalities. These men are flawed, no two ways about it. Mostly I found that to be refreshing (although see cons below also). - Because of my reservations toward Hector, I found the times when Sam gets angry and stands up for himself encouraging. He's not a total submissive doormat, that's for sure. CONS: - At this point (I haven't yet read the later volumes in the series), Hector is one of my least favorite fictional Doms ever. He is horribly jealous and at times cruel, thoughtless, inconsiderate, etc. toward his sub. I've been told, though, that he improves in the later books, and I hope that I find that to be true. - (This is related, but I felt that it needed a new bullet.) Another reader told me recently that Hector is portrayed quite accurately according to the cultural norms associated with his race/ethnicity, but I perceived some of his actions to be mentally abusive. And not in the "I'm doing this to stretch my sub's limits and make him a stronger person" way, either. A couple of things he does to Sam (not all knowingly, it should be said) do nothing but tear Sam down. Overall comments: Although I didn't love this volume, I'm interested enough to read the other two books in the series, and I certainly think Lygon's a capable writer. There will have to be some pretty significant changes in the nature of the main characters' interactions, though, if I'm going to grow to love the series.

Published by Thriftbooks.com User , 13 years ago
I loved this book. There's so much going on, and the magical realism is pure delight. Hot sex and magic in urban southern California; who could resist? I've read it twice now, to catch the nuances I missed. There are so many layers to this book: light comedy amongst the gods (my favourite parts), struggle and strain between Sam and Hector, dark, frightening undertones whenever Fear rears his bristly head. The writing flows, its tone and rythms completely engaging. I'm looking forward to reading the next two in the series.

Just a short hands up

Published by Thriftbooks.com User , 14 years ago
All right, I can't explain well what this book is like and what it has left to me. It's chaotic, energy, fantasy, fear, pain, pleasure... all mixed up in an huge melting pot. Sam is a twenty-something years old guy who wants with all himself a Master in his life; he needs him, he craves him. He wants sex, yes, but not only, he wants to be dominate by someone, to be controlled. But he is just escaped from an abusive partner, that still manages to influence him and prevents him to find a real partner. Sam, like many before him, thinks he deserves to be beaten, and so he deserves the pain Marcus inflicts to him, and it is not the pain/pleasure he really wants. Then he meets Hector, a forty-something Dominant, with an high propension to sadism. But Hector is also a caring person, who wants to rule his boy, but also protects him. He is the very daddy Sam wants, if only he manages to go over his fear. Around them we have an huge set of supporting characters, made of gods, goddess and even a ghost. You will learn that a god is real only if you believe in him, only if you worship him: so a god could be also your neighbour, if you believe in him. Jay Lygon succeedes in balancing well the delicate relation between pleasure and pain, boy and Master, sex and love, sex and fear...

Published by Thriftbooks.com User , 14 years ago
When I come across a great M/M e-book, I want it in print immediately. Unfortunately most of the time the print version is only available months if not years later. Chaos Magic is such, when it was released as a e-book more than a year ago. This amazingly well written M/M BDSM erotica is not an easy read at all but there is no way one could stop reading. Sam's story is extremely emotional, often disturbing. Most of the time it is almost painfuly to be in Sam's head as he struggles with his needs to be the perfect submissive, as he is desperately in need of a top who could really fulfill him, nurture him and save him. Hector could be such a top and their struggle to reach the perfect "Sub/Dom" state is paved with difficulties and not a few heartaches. Sam is an endearing bottom and you just wish that this abused young man will find happiness with Hector, whom I wish could have been more understanding. On the other hand Sam is a complex and very disturbed young man. Some readers may find the story a trifle confusing as it is told very much from Sam's perception and views of his surroundings but for me, is is remarkably written, refreshing, unique and one intense and emotional read. Very glad to have this one and its recently released sequel "Love Runes" in print!
Trustpilot
Copyright © 2022 Thriftbooks.com Terms of Use | Privacy Policy | Do Not Sell or Share My Personal Information | Accessibility Statement
ThriftBooks® and the ThriftBooks® logo are registered trademarks of Thrift Books Global, LLC