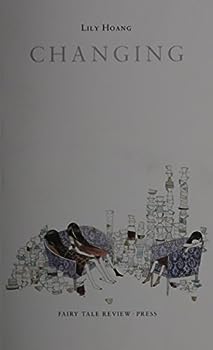 Fiction. Winner of a 2009 PEN/Beyond Margins Award. At once a fairy tale, a fortune, and a translation told through the I Ching, Vietnamese-American author Lily Hoang's CHANGING is a ghostly and miniature novel. Both mysterious and lucid at once, the book follows Little Girl down a century-old path into her family's story. Changing is Little Girl's fate, and in CHANGING she finds an unsettling, beautiful home. Like a topsy-turvy horoscope writer,...

Published by Thriftbooks.com User , 13 years ago
My 13 year old's review: Changing by Lily Hoang consists of 139 pages. Changing is made in a hexagram form, meaning blocks of separate stories in blocks instead of paragraphs. In Changing, there are no complete sentences and instead of regular `and' they are ` & 's. Changing is a fairy tale of Jack and Jill and its depth, and translation of Water over Fire, a fortune, and a biography all in one. The main character is Little Girl who tells you her story of how she got to where she is and she is the narrator calling you lover and letting you into her life and all of its ups and downs and family. A full background of Jack and Jill's tale and a translation of the four elements accompany Little Girl's story. The narrator gives you complete sadness and gives you a wake up call of self-realization. Character Analysis: The main Character is Little Girl and her family. Her family consists of brother Big Brother, sister Big Sister, Mother, Father, and the reader who is called Lover. Little Girl describes an ex-boyfriend and he is Adam but that is only a fake name. Little Girl's primary trait is hope. Like, hope for love, hope for a better life, and hope for her family to be normal. Little Girl's actions make the work itself very melancholy. Little Girl gets molested, made fun of because she is Asian, constantly being wounded, and has many family problems. Her decisions make more conflict even form the simplest of tasks she endures. Little Girl grows and finds her dream home at the end of the story. Little Girl also realizes she is even smarter than she thought in the beginning of her life story. Theme: The theme of this story is to explore life to its fullest. The author develops this theme by Little Girl always being awkward and always being a wallflower and never living enough. Other elements such as Little Girl's horrible childhood enhance the theme. So do Little Girl's dating disasters and her sister and brother being a mess. This theme deals with the nature of humanity because not too many people actually live life to its fullest, Little Girl doesn't because she has had such a bad past that she is afraid if she bursts out of her bubble the world will swallow her up. The theme deals with the nature of society because people in society are also making it seem like certain stereotypes are very outgoing. Little Girl was criticized for being Asian and many people in her childhood thought of the Asian stereotype and thought of her as being only a math geek when she despised math. The theme deals with the nature of humanity because us humans feel that life is too precious to just blow over when its okay to have a little fun and go stay up until midnight just being with friends. Title: The title of this story is Changing and changing suggests the theme by having meant that people should live life to its fullest and change their lifestyle a bit. If everyone just let go for the slightest moment, it will make everyone understand why life is so grea

Published by Thriftbooks.com User , 13 years ago
Lily Hoang has created something truly unique and altogether fantastic (in nearly every sense of the word) with this book. I find this a hard book to really talk about. It's perhaps best described as a book of oscillations, in craft and syntax as well as meaning and direction. It's a book that circles in on itself as well as outward, swelling upward like an explosion while sinking into the depths like a whirlpool. Deafening in its unsuspecting force, but also at times in its silence. This is a book that raises big questions (Are we to believe in fate? If so how seriously do we (should we) take it?)) while keeping itself grounded with an authentic, enjoyable poignancy and honesty that is generated in part from autobiographical themes that seem to course through a lot of Lily's work. It's an experiemental endeavor while at the same time struggling with its roots as a retelling of ancient fortunes. Most importantly, it's a delicate yet strong book; beautiful and ugly but always enjoyable. I can't imagine anyone regretting the buying of this book, particularly if they give it the involvement it desires and warrants.
Trustpilot
Copyright © 2022 Thriftbooks.com Terms of Use | Privacy Policy | Do Not Sell My Personal Information | Accessibility Statement
ThriftBooks® and the ThriftBooks® logo are registered trademarks of Thrift Books Global, LLC