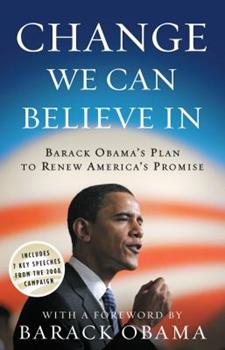 Change We Can Believe in: Barack Obama's Plan to Renew America's Promise

The election of Barack Obama as President of the United States is a defining moment in American history. After years of failed policies and failed politics from Washington, this is our chance to reclaim the American dream. Barack Obama has proven to be a new kind of leader-one who can bring people together, be honest about the challenges we face, and move this nation forward. Change We Can Believe In outlines his vision for America. In these pages...

Published by Thriftbooks.com User , 13 years ago
With the party conventions over, it is now zero hour for both candidates. While John McCain's impulsiveness appears to be giving him some traction in consolidating his party base, Barack Obama reminds the American public that change is not a commodity to dole out as a pure diatribe against the Bush administration. Much like Bill Clinton and Al Gore's 1992 book, Putting People First: How We Can All Change America, the timing of this policy book from the Obama camp is a noteworthy attempt at transcending political lines to get to the heart of what change Obama proposes as President and how he plans to implement his policies as part of a strategic road map toward economic prosperity and regaining the nation's standing on a global level. Because Obama has been so eloquent with his first two books, Dreams from My Father: A Story of Race and Inheritance and The Audacity of Hope: Thoughts on Reclaiming the American Dream, the lack of a first-person voice in the first two-thirds of the book was initially off-putting to me. However, what dawned on me as I was reading his stepwise proposals was how his policies have become larger than even his media-ready personality. The transformative nature of the text resonates more in the third person since the policies reflect a singular vision of sweeping change that is almost overwhelming in its scope but at the same time, attainable and inevitable. That is how the book reflects Obama's purest gift, the ability to inspire and to get people to look beyond their own personal needs. The Obama team divides his plan into four distinct components: -- Reviving the economy by creating bottom-up growth, foregoing policies that protect special interest groups, and providing affordable health care. -- Fortifying our economic future by introducing five million green jobs, investing in education, and playing a more effective role in globalization to keep up with exploding economies like China and India. -- Rebuilding the nation's leadership on a global scale by ending the Iraqi conflict responsibly, refocusing efforts on thwarting global terrorism, and renewing alliances that have been unwisely ignored during the last administration. -- Embracing the values of the citizenry by forging trust in the government, encouraging public participation and service, and turning the tide on the pervasive cynicism destroying the national fabric. Obama's personal voice comes back in full force in the last third of the book with the complete text of seven rousing speeches he gave over the course of the campaign. They range from his brief tribute to fathers who take responsibility for their children's future to his clarion call in Flint, Mi, to renew American competitiveness. Three years ago, McCain co-wrote a fine book targeted to young adults, Character Is Destiny: Inspiring Stories Every Young Person Should Know and Every Adult Should Remember, which identified 34 role models, all of whom followed their conscience against seemingly insurm

Published by Thriftbooks.com User , 13 years ago
This book puts forward a comprehensive policy statement that clearly sets forth how Barack Obama would manage the country, from the ecomony to military affairs to the range of social issues that confront our country and its citizens. The book is detailed without being dense or too academic. It uses vocabulary that is understandable by those of us outside of the Beltway. In other words, the book is smart without employing insider, technical terms. Moreover, the book articulates a blueprint for progressive politics. "Change we can believe in" is more than a sound bite; Obama proposes new ideas to solve old problems. And, he's not afraid to take on particulrly difficult issues that many attempt to avoid. In the context of criminal justice, for instance, Obama lays out a plan to be both "smart" and "tough" on crime. Recognizing that reactionary responses to criminality over the past 30 years have not resulted in less crime; nor has increased incarceration. Obama has figured out an approach to solving the crime problem in America, instead of continually putting Band Aides on this social injury. I think this is a refreshing read for any student of politics -- indeed, any citizen who wants to learn about new, exciting, and practical ideas for fixing our democracy.

Published by Thriftbooks.com User , 13 years ago
This calm, straightforward book reminds me why I have a "Women for Obama" bumper sticker on my truck. It's short on rhetoric, long on clear-headed, specific ideas on how to fix America's problems. In back are seven key speeches from this long presidential campaign, speeches so beautifully written they read like poetry. Any voter wanting to know more about who Barack Obama is and what he stands for should read this book. In essence, it's a glimpse into what Obama will do as president, why these actions are smart, and how he'll get the plan done. It's like a presidential crystal ball, letting readers know what they're voting for -- or against. Change We Can Believe In was put together by Obama for America, with a foreword by the candidate. Net proceeds from book sales will be donated to charity. The speeches soar. The "race" speech Obama gave in Philadelphia is striking in its honesty: it is from a leader, not a politician. From the New Hampshire Primary Night speech: "And so tomorrow, as we take this campaign south and west, as we learn that the struggles of the textile worker in Spartanburg are not so different than the plight of the dishwasher in Las Vegas; that the hopes of the little girl who goes to a crumbling school in Dillon are the same as the dreams of the boy who learns on the streets of L.A.; we will remember that there is something happening in America: that we are not as divided as our politics suggests; that we are one people; we are one nation; and together, we will begin the next great chapter in America's story with three words that will ring from coast to coast; from sea to shining sea. Yes. We. Can." Here's the chapter list: Foreword by Barack Obama Part One: The Plan Introduction: Hope for America 1. Reviving Our Economy: Strengthening the Middle Class * Provide immediate relief with an emergency economic plan * Economic security and opportunity for all American families * Affordable health care for all Americans * Empower families to succeed * Restore trust, return to fiscal responsibility 2. Investing In Our Prosperity: Creating our Economic Future * Promote our energy independence and create five million green jobs * A world-class education for every American * Make America the undisputed leader in science and technology * Build the infrastructure of the twenty-first century * Help our small businesses and manufacturers thrive and create jobs * Compete and thrive in the global economy 3. Rebuilding America's Leadership: Restoring our Place in the World * End the war in Iraq responsibly * Finish the fight against Al Qaeda and turn the tide against global terrorism * Rebuild a strong twenty-first-century military * Stop the spread of nuclear weapons * Renew our alliances to meet new global challenges 4. Perfecting Our Union: Embracing America's Values * Restore trust in government and clean up Washington * Make voluntary citizen service universal * Partner with communities of faith * Strengthen families * Advance e

Government We Can Believe In

Published by Thriftbooks.com User , 13 years ago
Barack Obama's previous books, especially Audacity, speak eloquently about his vision of politics. This new books speaks with equal clarity and wisdom at greater length about his vision of government. The first two-thirds of the book present "The Plan" for reviving our broken economy, exploiting new technology, confronting our enemies abroad, and fixing a government that helps the few and ignores the many. The final third contains some of his best speeches. The book provides readable details about what President Obama's priorities would be. It successfully blends large themes--like reducing government waste and encouraging American entrepreneurship--with corresponding specifics--like requiring disclosure of legislative earmarks and exempting start-up companies from capital gains taxes. The book is as compelling as it is important.

A Compelling, Timely Book--A Must Read!

Published by Thriftbooks.com User , 13 years ago
This book presents a compelling set of policy proposals on every major issue confronting our nation. It's not just an overly managed, overly sanitized campaign tome. It asks hard questions and provides clear, practical answers. In a time when increasing income inequality and polarization between the parties challenge the ability of ordinary citizens to make democracy work, this book lays out a detailed vision for change--and one that actually seems possible. For example, Obama has a clear, sensible plan for removing the influence of lobbyists in Washington, that involves things like creating an independent agency to investigate congressional ethics, closing the revolving door on lobbyists, and making information about what goes on in government more accessible to ordinary folks. These are practical ways to make government more open to citizens. I found it very easy to read, since Obama writes about policy change in a straightforward way that makes it easy to understand what the problem is, what the challenges to making change are, and how we can negotiate contradictions and conflict to find solutions.
Copyright © 2020 Thriftbooks.com Terms of Use | Privacy Policy | Do Not Sell My Personal Information | Accessibility Statement
ThriftBooks® and the ThriftBooks® logo are registered trademarks of Thrift Books Global, LLC