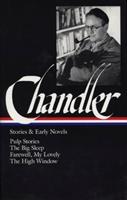 In Raymond Chandler's hands, the pulp crime story became a haunting mystery of power and corruption, set against a modern cityscape both lyrical and violent. Now Chandler joins the authoritative Library of America series in a comprehensive two-volume set displaying all the facets of his brilliant talent. In his first novel, The Big Sleep (1939), the classic private eye finds his full-fledged form as Philip Marlowe: at once tough, independent, brash,...

Great stories by a great author

Published by Thriftbooks.com User , 19 years ago
Chandler is perhaps the greatest writer of detective fiction and a great author period. To ignore these books is to ignore much of what is great about American literature.Two of his three best novels are included here (The Big Sleep & Farewell, My Lovely).The stories and great fun, if also rather flawed. My biggest complaint is that are presented here in their republished form, rather than with the original names of the protagonists. (For example, the hero of "Red Wind" is Philip Marlowe here, rather than John Dalmas.) That a fairly minor quibble. Especially good are "Goldfish" and "Red Wind."The binding is very nice, as are all Library of America editions. My edition has held up quite well after heavy use.

Published by Thriftbooks.com User , 20 years ago
Earlier anthologies of Raymond Chandler's works mostly center upon what have come to be known as his 'big four' or earliest novels -- The Big Sleep, Farewell My Lovely, The High Window, The Lady In The Lake -- or upon his later, and admittedly (with the possible exception of The Little Sister) 'inferior' works. Chandler's earlier short stories ( many of which he "cannibalized," to use his word, for the material in his subsequent novels) are normally treated as a separate genre altogether.This particular collection, rightly, combines Chandler's first three novels with the best of his earlier short stories, recognizing the thematic unity in those works. (Good as it is, "The Lady In The Lake" demands to be treated separately from Chandler's earlier efforts.)Chances are, if you're reading this, you've read most, if not all, of Chandler's Phillip Marlowe novels. You may as well have read many, if not all, of the short stories presented here. But have you read these novels, and these short stories, TOGETHER in this context? Likely not. But you deserve to.In the short stories, for example, there are protagonists named John Evans, Ted Carmody and Tony Resick (the last two of which, interestingly, inhabit locations which were most likely Los Angeles' Hotel Mayfair, with which Chandler had more than a nodding familiarity). And when, in Chandler's writings, did they meld themselves into what would be his penultimate creation, Phillip Marlowe?And at which point did Chandler begin to write, as fellow writer Ross McDonald termed it, "like a slumming angel . . ."? The answers to both questions may well lie here, in this collection.Pick up this collection! Read it! Discover the material anew!

Published by Thriftbooks.com User , 24 years ago
The addition of this title and its companion volume, "Later Novels & Other Writings," to the venerable Library of America series makes official what mystery fans have always known: Raymond Chandler is one of the gods of American literature. Following the trail blazed by Dashiell Hammett, Chandler created Philip Marlowe and the set the standard against which all private detective fiction is measured. This two-volume set covers almost the full canon of Chandler's work from early pulp stories to all the Marlowe novels, the screenplay for "Double Indemnity," and essays on the mystery genre plus the usual Library of America goodies such as notes on the text and a chronology of the author's life. In terms of literary inventions, the Wild West cowboy and the hard-boiled PI are this country's only true native sons, and, as such, are deserving of resepct. One of them at least now has it.--Michael Roger

"MARLOWE BY ANY OTHER NAME WOULD BE JUST AS TOUGH"

Published by Thriftbooks.com User , 25 years ago
For you hard-boiled detective fans who are also intogeneology, you might like to trace Philip Marlowe's familytree. Raymond Chandler's prototypes for his now famous detective began in the mid-30's with characters from some of his early pulp magazine stories. Whether the character is Ted Carmady, Johnny Dalmas, John Evans, Tony Resick or a character named simply Mallory, they all had the qualities and charactoristics that eventually evolved into what became Philip Marlowe. Red Wind, Trouble Is My Business and Goldfish are just three of more than 40 stories Chandler wrote during his lifetime. Don't miss a single one!
Copyright © 2020 Thriftbooks.com Terms of Use | Privacy Policy | Do Not Sell My Personal Information | Accessibility Statement
ThriftBooks® and the ThriftBooks® logo are registered trademarks of Thrift Books Global, LLC