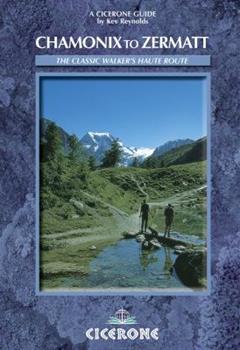 Chamonix to Zermatt, Mont Blanc to the Matterhorn - in two weeks of mountain travel you will see the greatest collection of 4000 metre peaks in the Alps and visit some of the most spectacular valleys.The route is more than 180 kilometres long. It crosses 11 passes, gains more than 12,000 metres in height and is a strong contender for the title of Most Beautiful Walk in Europe.This new edition includes a few minor changes which have occured to the...

Published by Thriftbooks.com User , 15 years ago
This is an indespensible book for anyone planning on doing this hike.

A great hike, and a reasonably good guide book.

Published by Thriftbooks.com User , 16 years ago
My son and I completed this hike, with Kev's book, a compass and two topo maps, during the first two weeks of July in 2005. Here are our comments: 1: The book itself was light and compact (easy to carry), and stood up well in the rain and light snow that we encountered (Important: as other paper maps, etc. did not stand up to the weather well.) 2: The travel times listed in the book were much shorter than we encountered most days, as were the times on the hiking signs that we encountered along the way. 3: We found that once we had a gauge of our times vs. Kev's times, and/or the times on the hiking signs, we were able to make a reasonable estimate of what our time would be for that stage. Our speed, relative to Kev's, and/or the hiking signs, took a few days to figure out though. Kev did mention this technique in his book, and we found it worked well. 4: We experienced a couple of instances when the book was not clear on which path to take, which caused us some additional time during a stage. However, the weather caused us more concerns than anything in the book. We experienced weather related slowness especially during the stage from the Col de Louvie to the Cabane de Prafleuri, in the heavy clouds and fog, where route finding skills were required. 5: The only real snow that we had to traverse was at the Col de Louvie and down the back side. It was slippery at times, but no special equipment was required. 6: The path did have a few sections that required extreme caution, and a deep breath. We feel that Kev did not describe the difficulty of some sections adequately, but the vast majority of the trek was not particularly difficult, or dangerous. 7: There were NO glaciers on the path at all, as stated in the book. In fact, there were very few glaciers even near the path. Perhaps in really bad weather an inexperience hiker could get into trouble if not careful though. 8: Some of the sections of the hike, especially in the rock fall areas, were both long and tiring, and not well described in the book. 9: If you only take this book, and the weather gets bad, you may be very sorry. If not familiar with route finding in bad weather, a guided trip may be prudent. 10: The sections, "Paths and Waymarks" and "Safety in the Mountains" should be read carefully and the cautions taken to heart. In summary, this is a truly wonderful hike, Kev's book is a decent guide book for pre hike planning purposes, and also during most of the hike in reasonable good conditions. It is not always sufficient during difficult conditions though, which I believe Kev mentions. We would certainly purchase another book by Kev as a result of our experience with this one.

Published by Thriftbooks.com User , 16 years ago
I just returned from Switzerland yesterday, only 3 days removed from completing the walk in this book. I'll try to provide some constructive feedback on this book, as well as correct some statements in the other reviews. Corrections to other reviews first. Regarding D. Duvall's review from 9/02. On his #1, yes, the walk is quite difficult on some stages, but I suspect that the dramatic difference between Mr. Reynolds' assessment and one's personal experience is that Europeans are a culture of walkers and Americans are not. I ended up walking with 2 middle aged (actually somewhat older) British couples who completed the walk too; not without difficulty of course, but they completed it nonetheless. You do need to be in good shape, however, or else the hard stages will prompt one to consider giving up. I'm almost 30, a former high school distance runner, backpacked in Alaska for 4 weeks 2 years ago, and worked out diligently for about 2 months before doing this walk. Some stages were still VERY tiring, but you just have to keep going (grin...). If you want a taste of Alp trekking, but with less physical strain, try the Tour de Mont Blanc, as it's a little easier (not to mention shorter). The Haute Route is hard, plain and simple, but the scenery is fantastic and rewarding. On #2, Mr. Reynolds explicitly states that his times include no breaks whatsoever - pure travel time. I cannot speculate on Mr. Duvall's physical condition or reading ability, but it would be unfair to strongly criticize Mr. Reynold's time assessments. The route does involve several miles a day through mountains, so variation in daily hiking time would be expected. On #3, "treacherous" is somewhat subjective, and while I agree that I was sometimes amazed where the path would run (i.e. extremely steep, along cascade edges, or significant exposure where a fall could be fatal), there wasn't a single area where I thought the route was irresponsible in its path. Due care is mandatory on some sections, where a lapse in attention could have serious consequences, but these sections are VERY limited. You're at FAR greater risk to sprain an ankle (the terrain can be challenging sometimes) on this trip than plummet to your death. Basic care will enable most people to manage the squirrely sections with only moderate worry. In fact, one could argue that the occasionally perilous nature of the route is what makes it such a classic, exciting, European trekking route in the first place. Also, the vast majority of the path is waymarked very well. There were 2 or 3 occasions where I had to drop my pack, check my map, and take a compass bearing, but 2 or 3 times over 12-13 days is pretty good. The book and waymarking are good enough for the entire trek, with only occasional exceptions. Mr. Reynolds also states (and this is just common sense), that in poor weather and/or visibility, route following could be more difficult in some stages. It's simply unfair to criticize the autho

Published by Thriftbooks.com User , 18 years ago
Dear Trekkers, As hard as it is to follow guidebooks in reverse, I highly recommend this 8-12 day adventure in reverse,so that you can see Mont Blanc in all it's glory at the end & walk with the counter-clockwise trending masses on the TMB or Tour of Mt. Blanc which you encounter on the last few days. However, you will then have to climb down a steep ladder rather than up it, along a steep cliff. We managed to see tiny wild edelweiss along the trail, as well as giant domestic edelweiss destined for ricola cough drops. A short hail storm assaulted us on a pass, after which we were invited into a small hut for dinner. I don't know how anyone would fall into a crevasse on this route, as there was very little snowfield on this route in late summer (though you could slide into an icy lake)... even hiking up to the Arpette glacier was on dry trail. This guide was excellent, & small enough to carry in a pocket. Towns are numerous for resupply & huts are plentiful. Camping is cheap, especially compared to Italy where it's ridiculous. The trail goes from German speaking Zermatt to the French west side of Switzerland where it enters France, where huts are called refuges. I highly recommend joining one of the hiking associations for the insurance.... the Great Britain section of the 'Austrian Alpenverein' provides great hiker's insurance for about $50, or you can join the Swiss 'SAC', though Swiss huts don't give huge discounts to members, as is the custom in Austria. In August, reservations in popular huts are recommended, so plan carefully. Also, carry a filter as some huts don't have potable water. Enjoy & bon courage !PS. Both Zermatt & Chamonix have municipal camping near: centrum/zentrum/downtown for a very reasonable price, as well as hostels, hotels & refuge/huts. Wherever you stay in Chamonix valley, ask for the free valley transportation pass, if it is still in effect this year; you can take buses & trains.Also recommended, the train from Cham to castle studded Martignyon the Swiss side (sit on the South side of train for canyon view.
Copyright © 2020 Thriftbooks.com Terms of Use | Privacy Policy | Do Not Sell My Personal Information | Accessibility Statement
ThriftBooks® and the ThriftBooks® logo are registered trademarks of Thrift Books Global, LLC