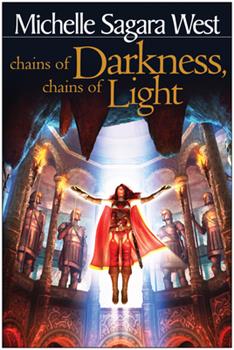 Chains of Darkness, Chains of Light

(Book #4 in the Books of the Sundered Series)

Erin of Elliath returns in this conclusion to the epic saga begun in the first three books in the Sundered series. Erin, formerly Lady Sara and now the legendary Lady of Mercy to the slaves of the Dark Empire, has just helped Renar, the rightful heir to the throne of Marantine, reclaim his kingship from an usurper. With the power of the Bright Heart waning under growing shadows of the Dark Heart, Erin and her friends must once again journey back into...

Published by Thriftbooks.com User , 11 years ago
Absolutely PERFECT! The entire series is awesome. For those who complain about the ending, they're crazy. The ending is perfectly romantic and fitting. I initially bought the first book figuring if I'd like it I'd buy all the others...well, after finishing it the first thing I did was order the other ones. They did not disappoint. Wonderful wonderful books that I will reread many times in the future.

I loved the ending

Published by Thriftbooks.com User , 13 years ago
This is one of my favorite series' of all time. Stefanos is a wonderful character- tall, dark, handsome and truly evil but reformed through the power of love. Some of the other revewiers did not like the ending, but I thought it was perfect. I am a sucker for a HEA type ending. I thought it was very clever of the author to wrap things up so neatly in the way she did. For me this was a satisfying ending to one of the most romantic fantasy books ever! Please read this series- you will not regret it.

Published by Thriftbooks.com User , 13 years ago
I loved the series, loved the last book...it is VERY dark and at points during the books i wanted to scream with rage...which to me makes it a great series if it can draw that kind of reaction from someone. The last brings the closure needed and overall I am looking forward to rereading this series in the future.

Published by Thriftbooks.com User , 14 years ago
Imagine God "sundered" in two, one side dark, one side light. Man is caught in the middle. That is the basis of the Sundered series, and in the first three books you are invited to watch as the "good" side loses the war with only a small contingency of good remaining. The only tiny ray of hope left is that the chief villain, Stefanos, has a spark of love for Erin (Sara), the only remaining warrior of the light. Both are chained to their separate sides of the conflict, neither can give in to their feelings without destroying their followers, betraying their "God" and losing the war. This is their final battle, and the outcome is not easy. Be warned, this is a difficult series to read. Very dark, very emotional, a good vs evil epic saga where the good guys rarely win. Evil is always stronger, simply because they have no rules. Virtue being its own reward will generally get you killed. Ironically, a clear winner will be a loss for both, pure evil can't sustain itself without an enemy, without the darkness, light becomes superfluous. This is not a standalone book, the preceding three books need to be read to understand the depth of the conclusion. HIGHLY RECOMMENDED, horrific torture scenes, mild sex, and you may have to put the books down several times or risk serious depression.

Published by Thriftbooks.com User , 21 years ago
Michelle Sagara brings her series of four books on the Sundered Lands to a close with an unexpected ending. The complex relationship between the Lord of Empire and the Sarillorn of Elliath brings the conflict between the forces of Light and of Darkness to conclusion. The characters are rich and entrancing. The world and cultures Sagara creates sparks the imagination. The whole series of four books make for four wonderful weekends of fantasy reading!
Copyright © 2022 Thriftbooks.com Terms of Use | Privacy Policy | Do Not Sell My Personal Information | Accessibility Statement
ThriftBooks® and the ThriftBooks® logo are registered trademarks of Thrift Books Global, LLC