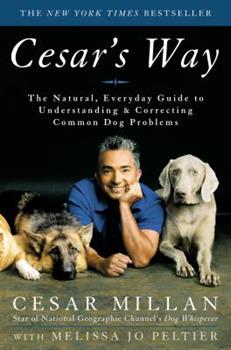 "I rehabilitate dogs. I train people." -Cesar Millan There are at least 68 million dogs in America, and their owners lavish billions of dollars on them every year. So why do so many pampered pets have problems? In this definitive and accessible guide, Cesar Millan-star of National Geographic Channel's hit show Dog Whisperer with Cesar Millan -reveals what dogs truly need to live a happy and fulfilled life. From his appearances on The Oprah Winfrey...

Published by Daniel H. , 8 months ago
Quintessential dog training book. A must for dog lovers.

Not bad for problem dogs I guess..

Published by JeffRome , 3 years ago
But stick with positive training techniques like Ian Dunbar's. The Kardashians of dog training.

Published by Thriftbooks.com User , 16 years ago
I have been a dog parent for years and have consistently had a pack of dogs (3, 4, 5 at a time). I have tried positive reinforcement alone and it doesn't work with dogs that have any tendency towards being stubborn, willful, or independent. When you have a pack of dogs you have to be the pack leader otherwise chaos will reign in your household. Before I began using Cesar's methods my dogs tended to misbehave. They are much happier and better behaved with me being the pack leader. No Cesar's methods are not new, but that doesn't mean they aren't the correct methods. Just as our society has coddled our children to the point they have become spoiled brats, we have coddled our pets so they run a muck in our houses. Dogs are not humans, and we need to work with their innate behavior. Treating them as if they think like humans is a waste of time and is deterimental to their happiness. People who critize Cesar's methods really don't undertand them. They are not about fear or pain. Tapping your dog with your foot, correcting it with a collar, getting its attention with a unique noise is not about fear or pain. Dogs, like children, must have "boundaries and limitations" and dogs are much happier when their human is in charge and makes them feel calm, secure, and safe. Cesar does not say that you cannot use positive reinforcement for training. Cesar's methods are not for training, they are for creating a foundation for a stong and peaceful relationship with your dog(s).

Your Dog Is Talking To You

Published by Thriftbooks.com User , 16 years ago
I've had dogs all my life, but this book gave me a whole new perspective. Cesar Millan's methods are based on the behavior of dogs living within packs. Packs are organised to the extent that there are pack leaders and followers. Instinctively, dogs need packs for survival, so they naturally follow the strongest and most stable dog and weed out weak, unstable dogs who threaten the effectiveness of the pack. When dogs are removed from their natural state, their pack instincts must be compensated or they become unstable. The root of most dog problems that Millan is asked to correct originate not with the dogs, but with their owners who often view their dogs as furry little people. Even those dog owners who recognise that dogs are not people, use human psychology on their dogs. This often takes the form of affection and is often given to soothe the dog when it is acting stressed. But, affection given at the wrong time, when the dog is stressed, rewards the dog's behavior and makes matters worse. Millan has several formulas that he applies to different situations. If you accept that dogs are pack animals, it all makes sense. If you want to control your dog, you have to become the pack leader. As pack leader, you cannot be unstable. You must be calm and assertive or the dog will dismiss you as the leader, though he might be fearful. As pack leader, you need to give the dog what he needs: exercise (dogs roam all day), discipline (packs are organised and the leader sets the rules, boundaries, and limitations) and affection, in that order. People often mess-up their dogs by giving affection and not much else. This results in the dog assuming, in it's mind, the role of pack leader. Every pack needs a leader and if you are not it, the dog will be. Millan says that he rehabilitates dogs and trains people. Many of the situations he encounters are amusing, because some neuroses can be funny. But, once you get it (understand what you're seeing and why it's happening), the causes of the neuroses, along with the cures, become clear. Much of the cure for dog problems is in understanding what your dog's movements are telling you and immediately acting to short circuit escalating behaviors. They telegraph virtually everything if you are attentive and understand the signals. Bad behavior can by stopped immediately by snapping them out of a state of mind that will lead, often within a second or two, to unwanted behavior. I think Millan's book is a practical and useful how-to guide and it gives you a basic understanding for building a mutually rewarding relationship with our flop-eared, furry friends.

Published by Thriftbooks.com User , 16 years ago
I have read the negative reviews of all the "spoiled-sports" who disagree with Cesar Millan's philosophy of the dog-human relationship. I feel they are merely jealous of the fact that he has become a "media idol" in the dog-training arena and is now pulling in the big bucks. As a dog rescuer who has taken in and re-homed over a thousand dogs over the past 10 years, I just wish Cesar had been around back when I first became so deeply involved in "pack mentality." I'm sure that I could have made some better decisions, saved even more dogs' lives, and dealt more effectively with some behavior issues. Of course, time breeds experience, and by the time I first saw Cesar on the National Geographic Channel last year, I realized to my great pleasure that many of the things I had learned and was now utilizing myself were based on the very premise Cesar promotes. Cesar's philosophy is based on common sense: humans are human and dogs are dogs. Most dog owners become oblivious to any common sense they may have possessed prior to adding a dog to the household when they bring their "new baby" home. There is nothing wrong with a "calm and assertive" approach with dogs, and nothing equally wrong with the dog being "calm and submissive." This does not mean that you will have a frightened dog that will submissively urinate, cower in the corner or become a fear-biter. As the supposedly more intelligent and sensitive being, you have to approach your relationship with your dog in a common sense manner and tempered with consideration for the natural temperament of the particular dog. But I do share and support the premise that dogs are much happier when they know that their human is the one "in charge." They are relaxed, content and much more prone to "be good." I'm sure there are many other well-qualified dog trainers across the country, some of whom have written good dog-training books, utilizing equally-effective methods of training. There is and never will be "one" form only, but to trash Cesar Millan's methods is to me nothing more than an undeserved "cheap shot."

Cesar says dogs need exercise, discipline and affection in that order! Read and you'll know why.

Published by Thriftbooks.com User , 16 years ago
This is a wonderful reference book and makes for good reading as well. I bought the book to give as a gift to a young couple whose dog needs some behavior modification. I planned to quickly scan through it to get an idea of its contents, wrap it up, and give it away. However, I ended up reading it word for word and will add it to our library! (I can think of several dog owners and parents who could use the concepts in this book for raising both dogs and children. I'll probably end up buying several copies as gifts.) I notice that one reviewer complained about the frequent reference to the pack leader concept Cesar writes about. Perhaps that reader is unaware that in a reference book clarification in the form of repetition is needed for those who are looking up only one or two segments at a time, such as "Rules, Boundaries, and Limitations," or "Dominance Aggression." I found Cesar's personal history and anecdotal material about him and others (Oprah Winfrey has a whole section on the relationship between her and her dog, Sophie) very interesting and enlightening. The book is clearly and concisely written. It is easy to see that Melissa Jo Peltier's writing abilities were very helpful to Cesar. Cesar was born in Culiacan, Mexico, and came here in 1990. He is now applying for U.S. citizenship. He has quite a story to tell about his childhood and his special relationship with dogs from the time he was a small boy. When he came here he noticed with dismay that American dogs had a number of "issues" related primarily to the fact that we Americans view our dogs as "four-legged humans" instead of dogs (animals). Our dogs need us to be calm-assertive pack leaders and to provide them with exercise, discipline and affection in that order. Cesar gives many illustrations of how this concept works and the fact that dogs use smell and the sixth sense of energy to evaluate other dogs and animals, including humans. I highly recommend this book to dog owners and, as mentioned earlier, to those contemplating having children or who already have children who need help. In a nation with increasing numbers of obese children, I was struck by the #1 need of dogs as stated by Cesar: EXERCISE. Perhaps, we might consider the same order of needs for our children: exercise, discipline, and affection in order to grow happy, healthy, productive human adults. Carolyn Rowe Hill
Trustpilot
Copyright © 2022 Thriftbooks.com Terms of Use | Privacy Policy | Do Not Sell My Personal Information | Cookie Preferences | Accessibility Statement
ThriftBooks® and the ThriftBooks® logo are registered trademarks of Thrift Books Global, LLC