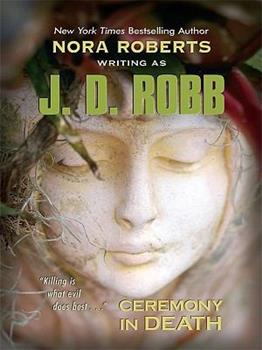 #1 New York Times bestselling author J. D. Robb presents the fifth thrilling novel in her futuristic In Death series--where even in an age of cutting-edge technology, old beliefs die hard. Conducting... This description may be from another edition of this product.

Published by Thriftbooks.com User , 18 years ago
This is the 5th novel in the "Death" series and its the best one yet. Jd Robb has really hit her stride with this novel- the characters are well fleshed out and the story line is fascinating. For those not familiar with the series, Jd Robb chronicles the life and cases of police Lieutenant Eve Dallas and her billionaire husband, Roarke. The novels take place in the future around 2058. In Ceremony in death, Eve is forced to investigate the death of a fellow officer. Her investigation leads her to satanic cults, Wiccan religious groups, and more murders. It seems that everyone Eve questions ends up getting killed and soon Eve herself is the target. Eve is disturbed by the ritualistic killings, especially given her own abused background. And she has no shortage of suspects. The attraction of the series is the mix of suspense and romance- all meshed into a great murder mystery. Its nice to continually follow the same main characters. Their complex and evolving relationship are what keep me reaching for the next book. Too often, storys concentrate on the courtship, but the Death series proves that marriage/committment are just as complelling, romantic and sexy. Eve and Roarke have a great partnership and chemistry that has been evident since their first meeting in book 1, Naked in Death. While Ceremony in Death is the 5th book, those who haven't read the earlier novels won't get confused as each book is essentially self contained. But loyal readers are rewarded as familiar characters are brought back--like Mavis, Peabody, Fenney and the butler. But prior knowledge of the series isn't required- in fact, I read book 1 Naked in Death and then this one..and have read some of the others out of order. Happy Reading!

Published by Thriftbooks.com User , 20 years ago
J.D. Robb continues to impress me with her "In Death" series. "Ceremony in Death" continues the tradition of excellence, providing an exciting, unsettling, and entertaining read.We receive new insight into the main characters, Lieutenant Eve Dallas of the NYPSD and her charming billionaire husband Roarke, with each book in the series. These two are a wonderful couple, and their dynamics become more complex and fascinating in this novel. When Eve and Roarke are together the sparks fly, and they have some highly erotic, yet never distasteful scenes.In this instalment of the series, Eve is investigating a case that involves satanic cults and lots of deep, dark secrets. The sinister atmosphere of this novel is expertly woven, causing Eve's encounters with evil to send chills up the reader's spine. Although we know who the bad guys are pretty much from the beginning. We do not have the mystery properly solved until the very end, and there are many thrilling and suspenseful scenes to keep the reader turning pages. I truly enjoyed this book, and with its romance and suspense, its intrigue and futuristic police procedure, there is something in it for everyone!I am in awe of J.D. Robb's incredible skill at writing continually superior books and I will continue to buy and recommend them as long as she keeps writing them!

Fifth book in this exciting series!

Published by Thriftbooks.com User , 21 years ago
The exciting in Death" series, continues with Ceremony in Death. Eve Dallas is investigating the death of a fellow officer to determine whether he was corrupt or whether he was murdered. The investigation involves a Satanist group and a group called the Wiccan. Roarke shows his Celtic / Irish roots more clearly as both he and Peabody know more about the Wiccan’s then eve. Peabody is really coming to be a real asset to Eve and a very interesting character in this series. Roarke gets involved in the investigation against Eve’s wish of course! This is really an excellent series. If you are a new reader start with Naked in Death at the beginning of the series you will be delighted! I recommend this book and the entire series!!

...in Death series continues with Ceremony

Published by Thriftbooks.com User , 22 years ago
The incredible "...in Death" series written by Nora Roberts, under the name J.D. Robb, continues with Ceremony in Death. Eve Dallas is investigating the death of a fellow officer to determine whether he was corrupt and whether he was murdered. The investigation gets Eve involved with a satanic cult and a wiccan group. The wiccan element brings more development to Peabody's character and makes Peabody more than just a trainee in this story since Peabody knows a bit about the wiccan practices.As always, Roarke gets involved in the investigation even when Eve doesn't want him to of course. This book is as good as the other's in this series and they're all great. If you haven't read the series start with the first book, Naked in Death. Highly recommended!

Don't miss this one!

Published by Thriftbooks.com User , 22 years ago
I loved this book! Once again Ms. Robb has written an entertaining, hard to put down, page turner. With each In Death book I am focused on finding the killer, but the plot always has surprising twists. This book did not let me down. It was very enchanting and mysterious. The characters are just mag, as Mavis would say. Roarke and Eve are the best though. He is the ever supporting rock Eve never knew she needed. And they are all so funny! GREAT READ, if you want to escape for a while into the life of the incredibly rich, and dangerously exciting. I suggest reading every one, in order. The characters really become like a part of you! This series is without a doubt my all time favorite. I hope it never ends!
Trustpilot
Copyright © 2022 Thriftbooks.com Terms of Use | Privacy Policy | Do Not Sell or Share My Personal Information | Accessibility Statement
ThriftBooks® and the ThriftBooks® logo are registered trademarks of Thrift Books Global, LLC