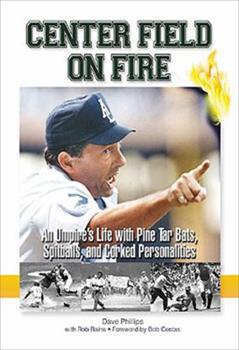 by Rob Rains and Dave Phillips

As entertaining as a Lou Piniella tantrum and as juicy as a Gaylord Perry spitball, Center Field on Fire chronicles the remarkable 32-year career of major league umpire Dave Phillips, as written with veteran sportswriter Rob Rains. Phillips walked out of the umpires'dressing room ready to start the second game of a doubleheader at Chicago's Comiskey Park on July 12, 1979, only to witness center field on fire. Disco Demolition Night--a promotion created...

Good Insight into Life of an Umpire

Published by Thriftbooks.com User , 12 years ago
The is a good book if you are curious about the inside life of a MLB umpire. Dave Phillips was truly a great American League umpire during his tenure, and it was pretty cool to read about his daily routine separating his family and umpiring life.

Published by Thriftbooks.com User , 13 years ago
I enjoyed this book. Dave Phillips umpired in some very bizarre games and he tells about that and much more from the umpires' perspective. It is very interesting to read about the relationships (some good and some bad) he had with his fellow umpires. If you like umpiring and baseball from the 70s and 80s, you'll like this book.

Published by Thriftbooks.com User , 16 years ago
if u love baseball this book is for u, from laughter to seriousness this book has all the greatness of baseball in a different perspective, the umpires, i recommend this book to all baseball fans or anyone interested in reading about baseball.

30 years of an umpires' perspective on MLB

Published by Thriftbooks.com User , 17 years ago
Many books have been written on sports, some by the players, some by those who watch and some by the people whose job it is to write about them. However, the people who officiate the games have the most unique perspective on the game, how it is played and how it is managed, in the sense of the on-field manager up to the level of the executive. Dave Phillips was an umpire in the major leagues for 32 years and has witnessed many changes in the game. Two points really stand out in the book. The first is how the umpires get along between themselves, which in many cases, is not very well at all. The stories about members of a crew hating each other so much that they refuse to even speak to each other or making bad calls and blaming others for it were disturbing. The idea that the umpires often do not work well together is a disturbing one, for even-handed officiating is the one thing that no sport can lack. The second is that baseball really has some serious problems that must be corrected. As Phillips notes, there has been a serious drug problem in baseball for over a decade, with an adverse affect on many careers. The focus has now shifted from cocaine to steroids, but there still appears to be no stomach for tackling the issue. Which is silly, because allowing the players to continue using drugs damages their careers and ultimately their health. Phillips recounts many of the most memorable events in the last three decades, from Gaylord Perry finally being kicked out of a game for using grease on a ball to George Brett being called out on a home run because there was too much pine tar on his bat. All are presented from the perspective of the umpire, which is an interesting one. The most disturbing point in the book is when Phillips discusses George Steinbrenner and an incident where Steinbrenner was asking for "special consideration" from the umpires. I found the description disgusting, I have never been a fan of Steinbrenner, but now I loathe him, a position all who care about the game should have. At the end of the book, Phillips goes over what he considers the fundamental problems baseball now has, from high ticket prices, to the lack of a commissioner tasked with "acting in the best interests of baseball." Clearly, the powerful owners seem unable to learn from other sports. Basketball and football have salary caps with revenue sharing and the popularity of both has soared in the last two decades. In this time, baseball has entered into a state where two players on the Yankees earn more than all the players on some of the other teams. In this environment, some teams simply cannot be competitive, and that destroys a sport.
Trustpilot
Copyright © 2022 Thriftbooks.com Terms of Use | Privacy Policy | Do Not Sell My Personal Information | Accessibility Statement
ThriftBooks® and the ThriftBooks® logo are registered trademarks of Thrift Books Global, LLC