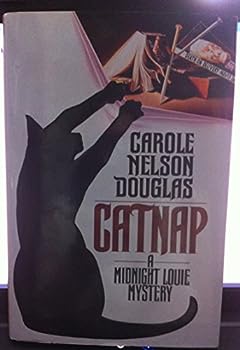 (Book #1 in the Midnight Louie Series)

This description may be from another edition of this product. "Catnap" is the first book in Carole Nelson Douglas's delightful Midnight Louie mystery series where we meet that fabulous 20-lb black cat-about-town and his sometimes roomate/owner cutie Temple Barr....

Published by Thriftbooks.com User , 12 years ago
This is the first volume of the Midnight Louie series that features that a crime solving tom cat who talks like he is the reincarnation of Sam Spade and the 'doll' who helps him, Temple Barr a petite public relations free lancer. The pair prowl the mean streets of Las Vegas as the puzzle out answers to crimes that stump the local police. CATNAP introduces the pair both to the readers and to each other as Louie tries to get Temple to discover the murdered body of a rather shady book publisher who had the bad taste to die in the midst of one of Temple's biggest projects. Disaster seems to be looming for Temple's fledgling PR career when shortly after the dead human is discovered the catnapping of a pair of famous 'spokescats' is also found. Louie is soon hot on the trail of the culprits, a trail that leads him all too close to using up his ninth life. As is common with the introductory volume of a series much time is spent supplying background material, even at the expense of the mystery aspect. CATNAP follows this pattern, as the author devotes most of her attention to setting the scene for subsequent novels. Temple Barr and her human companions are all introduced and supplied with interesting backstories. Louie is described at length, many of his cohorts and even his previous humans are also introduced. This does not leave lots of time for the mystery aspect of the story, but in true cozy fashion it is not really the point anyway. This series will appeal to those who are fans of series cozy mysteries, particularly those involving cats - such as the CAT WHO series.

This is where it all began

Published by Thriftbooks.com User , 18 years ago
Both the adventures if Midnight Louie and my addiction to said cat and his "roommate", the petite but very professional PR specialist, Temple Barr. Little does she (or the new reader) know that when Temple sets off in her trademark high heel shoes after a black cat on the loose at the American Booksellers Association convention in Las Vegas that this is the beginning of not just a mystery and murder but one of the most intriguing partnerships in mystery books. Not only is Louie - the back cat that Temple pursues - intent on leading her to discover the body of Pennyroyal Press publisher Chester Royal- he also manages to squirm hs way into her heart - especially when he does a Sidney Carton and risks life and limb to help rescue Baker and Taylor - two cats who have been catnapped at that same ill-fated convention. Temple is a Mighty Mite - small but brave and ferociously curious. Following Louie's lead, and with a bit of martial arts training from her divine new neighbor, Matt Devine - she manages to solve all the crimes. In the process she acquires a roommate and protector - the somewhat oversized but magnificent Midnight Louie. It is the rollicking beginning to an aphabetical series of Midnight Louie mysteries - what could be looked on as the first chapter of one very long and entertaining mystery saga. While each book in this series stands on its own merits as a good read, it is great fun to start at the beginning and read the books in order. Then the real structure of this series becomes evident and the entertainment value triples.Louie is not your ordinary cat detective. He plays an active part in solving the mysteries he encounters, whether it is simply calling attention to the most vital clues or by intervening tooth and claw to preserve and protect. He's tough talking, with an amusing way with words - a sort of feline Sam Spade but with a heart of gold - although he'd prefer that you not notice that. And Temple Barr is not your typical small female with a shoe obsession, but an intrepid investigator full of courage and heart. Along the way we get some intriguing glimpses into the world of publishing as well as the vagaries of human nature. The Midnight Louie series may read like light cozy mysteries on one level, but read carefully. They are also insightful on a number of levels - and that insight keeps growing as the mystery progresses.

A Fine Mystery Set In An Unusual Place

Published by Thriftbooks.com User , 19 years ago
Midnight Louie does his usual great job of "solving" this murder mystery set in a Bookseller's Convention. Actually, he finds the body and of course he is responsible for his human, Temple Barr learning who did the dastardly deed and proving it. Miss Barr gets into a lot of trouble along the way and, of course, Midnight Louie "rescues" her from it. Midnight Louie is the ultimate in purrivate eyes with his tough, hardboiled outlook, just like the human detectives.

Published by Thriftbooks.com User , 21 years ago
A fan of the mystery, Catnap allows for the "purr-fect" twists that keeps you guessing. Not only do you get the clues and the chance to figure out the murder, you get a "cat's eye" view of the "purr-dicament." Being a cat lover as well I found that to be an enjoyable touch. "Midnight Louie" has a way of putting his mark on things; the type of mark that doesn't stink up the story line, but instead inhances it. I would recomend this book and any in the series to any avid mystery or cat lover.

Catnap does not include sleeping

Published by Thriftbooks.com User , 22 years ago
This first of the "Midnight Louie" series introduces the reader to the world of Las Vegas hoopla through the eyes of a never-say-die, young free-lance PR woman, Temple Barr, and "Midnight Louie," the 20 lb. black cat who decides to adopt a new human. Temple demonstrates a talent for stumbling over dead bodies and, instead of being frightened, must investigate *whodunit.* Midnight Louie does have his say, and demonstrates his feline logic and methods of helping her be at the right place at the right time. Carol Nelson Douglas turns a dandy phrase that's fun to read. This non-fiction addict, and spouse, are now hooked onto Midnight Louie.

Catnap Mentions in Our Blog 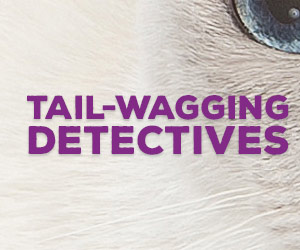 Sleuths of the Canine and Feline Persuasion
Published by Richard Wells • April 11, 2016

The curse of the binary is in dividing the world into two kinds of people: people who eat the pizza’s crust and those who don’t, pie people vs. cake people, mustard people and catsup people, and speaking of cats, there seem to be cat people and dog people. Groan if you like, but this is a serious division, at least to dog people and cat people.