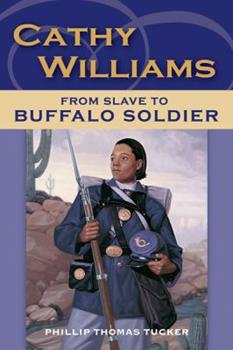 Now available in paperback Women in the United States military have received more recognition than ever in recent years, but women also played vital roles in battles and campaigns of previous generations. Cathy Williams served as Pvt. William Cathay from 1866 to 1868 with the famed Buffalo Soldiers who patrolled the 900-mile Santa Fe Trail. Tucker traces her life from her birth as a slave near Independence, Missouri, to her service in Company A, 38th...

Published by Thriftbooks.com User , 11 years ago
I am thoroughly thrilled by the fact that there was a female Buffalo Soldier. I couldn't have been happier when I learned of this book. I was not taught this in school and especially not anything about a Black woman.

Published by Thriftbooks.com User , 18 years ago
There is greater awareness because of the magnitude of this book and its message. And I'll wager that there are few Americans today, Black or White, who know about the incredible life of Cathy Williams. This remarkable story now has a voice. Once a slave in Independence, Missouri, Cathy Williams lived andworked in the 'big house' as a servant to its mistress. And thoughbeing a house servant carried greater privilege and status thanthat of the field hand, Cathy began to resent the menial tasks she performed as much as she resented her masters.After the death of her owner, and having the good fortune of not being sold to pay debts, Cathy realized that the fundamental premise of slavery was a lie and this life was not her chosen destiny. So in November 1866 she disguised herself as a man, used the name William Cathay, and enlisted in Company A, 38th U.S. Infantry and became a Buffalo Soldier. As the first and only African American woman to serve in one of the six black units formed following the Civil War. Interestingly enough, Williams was able to become a member of the Army without detection of her sex, and it was imperative that she keep her true identity unknown. Her adventures took her from Missouri to the Mexican border where she served for nearly two years. After her military career Cathy did not envision returning to her roots in Missouri, plus her heart was now in the West. So she married and created a life for herself on the Western frontier, as a business-woman in Trinidad, CO. There is much contention surrounding the validity of Cathy's story. Historians claim Tucker's only source about Williams' alleged service as a Buffalo soldier is based on a newspaper account published in 1876 and that there are no official records in existence to authenticate her Civil War service. Some believe it was easy for Williams to get discharge certificates from the 'real' William Cathay and pass it off as her own. And that 'Far too many of the speculations about Williams are colored by a 21st century "politically correct" perspective'. Yet others offer a more positive analogy, "Phillip Thomas Tucker the prize-winning author of The Confederacy's Fighting Chaplain tells this remarkable tale of Pvt. William Cathay of Company A, 38th U.S. Infantry, who in fact was a big-boned, 5' 7" black woman named Cathy Williams. This is a unique story of gender and race, time and place. Tucker's work is a recommended read that reaches across categories, from American, African American, and military history to Western and women's history." -- Thomas J. Davis, Arizona State Univ.Regardless of the controversy, this was a fascinating story presented more in the vein of a documentary than a novel and it allows readers to experience a non-traditional, non-typical life for a 'Colored' woman in the 1800's. Tucker uses this storyline to captivate and educate, and he introduces a believable character who unknowingly and unintentionally charted a course for the role of today's wom

Published by Thriftbooks.com User , 19 years ago
I just finished this wonderful book....enjoyed it very much..One can see all the truly great research that went into this book...This Missouri Author Phillip Tucker has written about 25 Civil War Books..All have best good sellers...I would recommend everyone reading his books....Dr. AJ & Janet Canpbell

Published by Thriftbooks.com User , 19 years ago
I found this book to be interesting and very enjoyable. It is an example of how one woman turned adversity into her triumph. I would recommend it highly.
Copyright © 2020 Thriftbooks.com Terms of Use | Privacy Policy | Do Not Sell My Personal Information | Accessibility Statement
ThriftBooks® and the ThriftBooks® logo are registered trademarks of Thrift Books Global, LLC