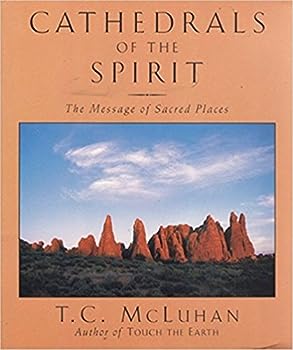 Cathedrals of the Spirit: The Message of Sacred Places

The bestselling author of Touch the Earth celebrates the existence of sacred "cathedrals" in nature and the human spirit, interspersing her own observations with the voices of philosophers, poets,... This description may be from another edition of this product.

Published by Thriftbooks.com User , 17 years ago
There's only one thing wrong with this book: it's not long enough! Not that it's small (308 pages), but the excerpts from people of many different faiths, philosophies, even sciences are only a page or two long. Even so, they are well-chosen. The book takes you on an excursion of how people find a sense of the sacred in various places, most of them outdoors but some in other places too (like temples). There are Christians in here, Buddhists, Muslims, Jains, nature writers, scientists, novelists....it's quite a marvelous collection, from Ibn 'Arabi to Thomas Berry to N. Scott Momaday. I'm not sure "collection" is the word I want; reading this felt more like receiving a gift. The quotations were so moving that I immediately placed two of them (Ralph Waldo Emerson, Edward Abbey) on the front page of my Web site. Here is one from Hildegard of Bingen, a true Renaissance woman before there was a Renaissance; she is giving voice to the "greening" (veriditas) force that animates the world: "All these live because I am in them and am of their life. I am wisdom. Mine is the blast of the thundered word by which all things were made. I permeate all things that they may not die. I am life." And this from someone more contemporary: Stephanie Kaza, describing the interplay between the natural world and the Buddha's moment of enlightenment there under the fig tree: "For seven days and seven nights he sat in meditation, supported by the tree. During the seventh night he was tormented by every possible distraction of the mind...To counter the force of ignorance, he touched his right hand to the earth. With the earth and tree as witness, the powerful realization of interdependence was revealed."

Great spiritual guide to nature and yourself.

Published by Thriftbooks.com User , 25 years ago
Hi sacred spirit traveler! I knew McLuhan's work from "Touch The Earth" and "Dream Tracks" both of which I could also recommend, but this book is in a way even more universal in that it's about all of nature, and all forms of spirit. For me it really helped bring alive the way you can feel a spiritual connection at places on the earth. I guess it helped to bring that reality more to the fore, with all these spiritual elders telling their own versions of the meaning of life, or the channeling of the chi, or the tingling of the toes. It's got Buddhists and Hindus and Native Americans, all without dogma. It's really cool. It's all about trees and places and the way that by being somewhere you have a more pure line of communication with The Big Guy, or the inner self. It made me realise I could be in touch with everything there ever was just by looking into a tree in silence. It really opened up new vistas of spiritual belief. (Plus its got some bitchin' pictures.
Trustpilot
Copyright © 2022 Thriftbooks.com Terms of Use | Privacy Policy | Do Not Sell My Personal Information | Accessibility Statement
ThriftBooks® and the ThriftBooks® logo are registered trademarks of Thrift Books Global, LLC