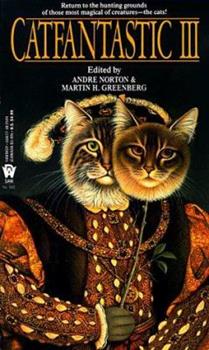 (Book #3 in the Catfantastic Series)

Here are all-new tales about those magical, mysterious dominators of humankind: the cats! Return to the cats' hunting ground with this third collection of stories. Twenty fur-flying fantasies are sure to capture the hearts of cat lovers everywhere.

20 tales of shipscats, familiars, and others

Published by Thriftbooks.com User , 19 years ago
Many transformations in this one: people reborn as cats, cats reborn as people, and some who have tried both and need restoration to their preferred shape.Barwood, Lee "A Woman of Her Word" - Tarberry, after a near-death experience in a breeding mill, uses new-found talents to help his rescuer.Bell, Claire "A Tangled Tahitian Tail" - Told by the first European to set foot on Tahiti: the ship's cat.de Lint, Charles "Saxophone Joe and the Woman in Black" - The sax player lost his woman when he stumbled across her true name - was she really human? And did he care?Dunn, Marylois "Teddy Cat" - Cory Johnson's allergic - to everything her stepfather doesn't want her to have: ice cream, the teddy bear he destroyed. But Cory won't let him take the idea of Teddy Bear away from her - so the wild tom that befriends her is Teddy Cat.Fontenay, Charles L. "Cat O' Nine Tales" - Adrian is a professional writer who makes a modest living through hard work. When Diana Colfax hired him through his agent to live at her family home and write her family history, he accepted the contract. But on his arrival, the situation at Nine Tales is fishy. A young man and woman greet him, saying that the old lady recently died and no arrangements were made for a book. Angered at having packed up his life, including his cat, for a long trip, then being fobbed off with an obvious lie (his agent's got the contract, only a week old, for goodness' sake), Adrian starts poking around. (The ending is somewhat rushed, but the setup is OK.)Griffin, P.M. "Partners" - As indicated by the title, this is another Bastet story (as in Catfantastic 2 and 5), rather than the Trouble stories of 1 and 4. The cat facing Bastet before his next reincarnation has never had a human Partner in the full sense of the term. Not that he was physically abused in his past life, far from it; he spent his life as a pedigreed Persian, in show cages and stud cages, with excellent care but no affection.Johnston III, John E. "...But a Glove" - With every full moon, Tom becomes a cat (a wayward gift shared by some descendants of Clan Chattan). Plays the devil with one's social life...Inks, Caralyn "Fear in Her Pocket" - Jayle is called to help a camilicat shed her old life for a new one, but the price this time comes high.Lackey, Mercedes "A Tail of Two Skittys" - See my review of her short story collection _Werehunter_, which contains all the Skitty stories to date.Mayhar, Ardath "Hermione as Spy" - Hermione's first job as a wizard's familiar, fresh from school.McConchie, Lyn "Moon Scent" - Tale of the dravencat Many Kills.McQuillin, Cynthia "Cat's World" - Cat acts as Guardian of the Old Knowledge, preserving the laboratory where his kind were designed before the rest of the world ended, because of a prophecy that their creator had once traveled into their present, her future.Miller, Ann; Rigley, Karen "Snake Eyes" - Lori's aunt and uncle recently died in a fire, survived by their cat, Silver, and their son, Ray. (No a

Published by Thriftbooks.com User , 21 years ago
I loved this continuation of stories about our most beloved pet-the cat. I especially liked the diversity of styles. Glad to see continuations of Skitty and Noble Warrior

Published by Thriftbooks.com User , 23 years ago
Once again a delightful blend of authors have come up with tales about cats and the people who are owned by them. I always enjoy a collection of shorts and this was no exception!
Copyright © 2022 Thriftbooks.com Terms of Use | Privacy Policy | Do Not Sell My Personal Information | Accessibility Statement
ThriftBooks® and the ThriftBooks® logo are registered trademarks of Thrift Books Global, LLC