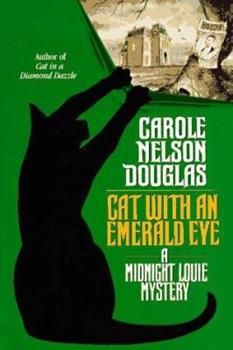 Cat With an Emerald Eye: A Midnight Louie Mystery

(Book #6 in the Midnight Louie Series)

A Viking to bed, not to wed Medana Elsadottir, known as the Sea Scourge, never planned to become a pirate, but there's no denying her talent. Her female-only tribe has an island hideaway, food aplenty, goods to trade...everything except the means to breed. That's where the strapping Norsemen tied up in her ship's hold comes in handy. Eight godly specimen--and Thork Tykirrson is the most virile of them all. Once their, eh, work is done, they'll be...

Seances, ghosts and murder, oh my!

Published by Thriftbooks.com User , 22 years ago
Cat With an Emerald Eye sees that irresistable inter-species team of Temple Barr and Midnight Louie, PI up to their respective heels and paws in the occult when a psychic is murdered at a seance held to contact the ghost of Harry Houdini. When it turns out that the victim was really a magician attempting to expose phony psychics, this dynamic pair is off searching for the killer. Temple must turn to one of her beaux, the Mystifying Max Kinsella, a friend of the victim while juggling her feelings for Matt Devine, the handsome ex-priest and martial arts practitioner. Louie, on the other hand, must reluctantly rely on Karma, the mystical Birman who lives with Temle's landlady, Electra Lark. While Temple and Max search for the killer in the victim's own files, Matt sees a ghost from his past-the once and future Cliff Effinger. Meanwhile, Louie's life is complicated, not only by murder but by his relationship with his daughter, Midnight Louise, his own father, Three O'Clock Louie and the revelation that his now has his own neamisis, a dude who threatens his very future. Once again, the reader is taken on a roller coaster ride in this, the sixth book in the Midnight Louie series and left wanting more, more mysteries and more of the characters Douglas so skillfully creates.

The mystery is actually stronger than the Midnight Louie

Published by Thriftbooks.com User , 23 years ago
An offbeat entry to the series - the various mysteries are more engrossing than the feline hero for once. The reader gets to hear Max's side of the story (one of 2 men PR-person and sometime-sleuth Temple Barr is attracted to) while getting caught up in a mystery involving a haunted house and a seance. There's also a fascinating sidebar with Temple's other fellow, Matt, and his glimpse of an-all-too-real ghost from his past. The overall atmosphere of the book is rather haunting and melancholy, marred only by Louie's slightly ridiculous take on things. I'm fond of the feline, but kitty seanaces? A little too over the top for me....

Published by Thriftbooks.com User , 24 years ago
Midnight Louie is known as a big, bad, streetwise kind of guy, but in his latst antic adventure, the beguiling cat-about-town shows his sensitive side. In "Cat with an Emerald Eye" both feline super sleuth Louie and his human companion, Las Vegas public relations woman Temple Barr, find themselves communing with the occult, and Louie, needless to say, proves to be the more adept. "I am beginning to think that I am as superior at seeing what is not there as I used to be at seeing what was there," the super sleuth meows. There is indeed a murder involved...but you get the feeling that the murder is almost incidental in Carole Nelson Douglas' mysteries. The real mystery is which of her two beaux will win Temple-Mystifying Max the magician, who is "like a volcano, unpredictable and exciting," or the ex-priest, Matt Devine,"who made her feel so utterly secure it was...divine. Max was caffeine, Matt was...chamomile tea. Max was edgy nerves, Matt was nirvana." The two men are linked not only by their love for Temple but also by two dead bodies, a connection that is played out slowly, book by book. In this one, Matt believes he glimpses one erst-while corpse, his wicked stepfather, making his way through Las Vegas. But the advantage, nevertheless, belongs to Max, for whom the dead magician/medium was a mentor. Though Max "needed to keep secrets about himself the way some other peole bled personal data like information-age hemophiliacs," he does, at last, give Temple some insight into his teenage summer in Ireland, when all his troubles started and he got into hot water with the IRA and involved with Interpol. But the motely crew of psychic suspects, Temple's tempestuous love life (not to mention her world-class shoe collection) and Max and Matt's past and present problems are just part of the fun. It's hard not to be charmed by Temple's eccentric landlady and her astral-projecting cat Karma ("the little piece of pussycat pixiedom" Louie calls Klinkerball). Louie's semi-retired father, Three O'Clock Louie, also makes an appearance, as do shades of Elvis, Amelia Earhart, Orson Wells and the late, great Harry Houdini. You never know what madness and mayhem you'll find in Douglas' mysteries, but you can be sure it will be wild, witty and utterly irresistible.--reviewed by Alix Madrigal

I love Midnight Louie, but...

Published by Thriftbooks.com User , 24 years ago
I have read all of Ms Douglas' Midnight Louie books to date and thoroughly enjoy them. There are two different points of view in the chapters of her books. Some are from the point of view of our heroine Miss Temple Barr, a Vegas PR agent, and some are written from the point of view of her very streetwise cat Midnight Louie. I really enjoy reading his chapters and their uniquely slanted opinions of all things cat and human. Somehow Miss Barr and Louie always find themselves in the middle of a murder mystery. And of course, Emerald Eye is no exception. As much as I love this series, however, I must rank this particular volume a bit low as the whole concept seemed a bit bizarre to me. Seances in general don't do much for me, and a seance held with the idea of raising the spirit of Harry Houdini - too much. All the spiritual and new age frou-frou were things I could happily do without. Also there is a back-of-the-story tale going on with Temple and her two loves Matt and Max which I am enjoying following. This volume made little progress with that story line and I missed it. If this is your first Midnight Louie book, don't judge the whole series on the basis of this one. Check out some of the earlier volumes, or better yet, start with the first and read them all
Copyright © 2020 Thriftbooks.com Terms of Use | Privacy Policy | Do Not Sell My Personal Information | Accessibility Statement
ThriftBooks® and the ThriftBooks® logo are registered trademarks of Thrift Books Global, LLC