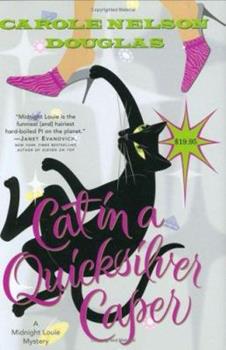 (Book #18 in the Midnight Louie Series)

Midnight Louie, alley-cat extraordinaire and Las Vegas's hairiest, hard-boiled PI, finds himself literally walking a tightrope when a fabulous museum opening at one of Sin City's swankiest casinos is marred by a little thing like death. Louie's loyal roommate, feisty PR freelancer Temple Barr, has snagged the commission of her career: repping the opening exhibition of the Russian Czars' priceless treasures at the New Millennium Hotel, the apex of...

Published by Thriftbooks.com User , 13 years ago
In this caper, Midnight Louie meets up with an old foe, a stunt double, and lots of backstage smoke and mirrors. Temple is working to get her freelance reputation back on track and get everyone to take her "new" blonde personna seriously when Max, Matt, and an exhibit of Russian art treasures collide in a wonderfully whirlwind story.

Published by Thriftbooks.com User , 13 years ago
This is the 18th book in the Midnight Louie series. I'm not sure how I got behind on it--I absolutely love these books. But the good news is, now I'm not having to wait so long between books. The mystery in this one really raises the emotional stakes. Magician Max, in his undercover work to infiltrate the Synth, has to steal a jeweled scepter on display in an exhibition for which Temple has been hired to do PR. Also, a dead body is found hanging at the site, and Max is the prime suspect, leading police Lt. Molina to renege on her promise to Temple to stop investigating Max. Ex-priest Matt, meanwhile, sensing the rift between Max and Temple, gets serious about pursuing her, and just to keep things from being too easy, Temple's romance novelist aunt Kit moves in with her for a while... and, boggling Temple's mind, begins dating the oldest Fontana brother. This series is one very long story, one I'm pretty sure will be wrapped up tidily by the time we get to Z, unlike some other series I won't mention. The emotions in Cat in a Quicksilver Caper are even more intense than usual--or maybe they're just more of a focus here. Max is being torn horribly between his duty and his love for Temple. He feels very strongly the importance of his work, and fears, not unreasonably, that he may lose her before it's finished. Matt's dilemma is different, but no less intense. Since he left the priesthood but not the church, it's an important issue with him to do what's right. He has some insightful conversations on the subject; as does Temple, who also consults a religious professional for advice on dealing with him. The mystery also tugs at the emotions, particularly the second death, which Max tries, but is unable to prevent. So add some extra guilt in there as well. And of course, there's Midnight Louie, working with his daughter Midnight Louise, the Cloaked Conjuror's big cats, and Shangri-La's sinister Siamese Hyacinth, who has a friendly body double. And oh, yeah. Molina has a stalker, and she thinks it's Max. One thing that's had Carole Nelson Douglas on my must-buy list for almost 10 years is that she writes in such different styles, but they're all wonderful.

I want to haunt the author to find out what's next!

Published by Thriftbooks.com User , 15 years ago
I have always been a fan of Midnight Louie and his red-headed, spike-heeled assistent Temple Barr - but my favorite book in the series have a certain unbeatable combination. First, of course, is a great mystery, which Temple and Louie must work together to solve, with the help and or hindrance of a cast of colorful, intriguing characters. Second is watching the almost impossible-to-decide love triangle between Temple, Matt Devine and the mystifying Max Kinsella. Finally it must have a plot which allows Louie to play a big part in solving the mystery and having a few capers of his own. And Cat in A Quicksilver Caper does all of this. It's, in my opinion, one of the best Louie books in a while )and Ihave loved them all.) Lots of Louie, lots of a love triangle that seems more impossible to resoove than ever, a great mystery, lots of undercover magic and mystery - and a cliffhanger so shocking that I wanted to haunt the author to hurry up and tell us more. So shocking that I sat with my mouth open turning pages back and forth thinking I must have misread. Trust me - this one is a must!

Published by Thriftbooks.com User , 15 years ago
This is the latest chapter in the author's ambitious Midnight Louie uber-novel, which began with 'Catnap'. Public-relations specialist and amateur detective Temple Barr continues to navigate the minefield of her emotional life (and occasionally stepping on a mine!) while investigating mysteries that threaten her loved ones or her PR clients. In this edition Temple tangles with members of the Russian mob while absent beau Max pursues a mysterious cabal of possibly-deadly magicians. The series continues to absorb and entertain with the characters' all-too human emotional entanglements and crack-ups enriching the story.

Published by Thriftbooks.com User , 15 years ago
Midnight Louie wants his human pet Vegas public relations specialist Temple Barr's two lovers, former magician turned something Max Kinsella and former priest turned radio host Matt Devine, to limit their stay in his home especially his bed. It is bad enough she has two duds and one stud in her life, Louie wonders how a flaming fireball redhead became a bleached blonde though he appreciate that Temple has stayed out of trouble enabling Louie to investigate female felines. However, Louie should have known better as trouble is defined as Temple. She prepares the publicity for the White Russian Czarist art exhibition at the New Millennium Hotel; however, nothing goes smooth as the pre-show publicity is not about the art, but instead a puzzling death. The publicity fails to improve when a deadly accident occurs during the opening. Besides the deaths that look suspicious to Louie, someone steals the prime exhibit item, the priceless Czar Alexander's scepter. Louie searches for the scepter and a killer as he believes the accident was a homicide while Matt proposes to Temple and LVPD Detective Carmen Molina claims Max is stalking her. All is normal even with evil Synth magicians plotting a nefarious sleight of the paw - it is Louie's memoirs. Though he has gone through his second set of nine lives, Midnight Louie's latest cat-escapades are brisk fun as his companion lands them in several capers including bedroom visitors. The story line is fast-paced as Temple learns that blondes have more fun might be misleading with murder, theft, and the Synth to deal with. Fans of the series will appreciate Louie's usual on target asides re the foibles of humans and his efforts to keep Temple safe. CAT IN A QUICKSILVER CAPER is a purrfect Midnight Louie feline sleuth extraordinaire. Harriet Klausner
Copyright © 2020 Thriftbooks.com Terms of Use | Privacy Policy | Do Not Sell My Personal Information | Accessibility Statement
ThriftBooks® and the ThriftBooks® logo are registered trademarks of Thrift Books Global, LLC