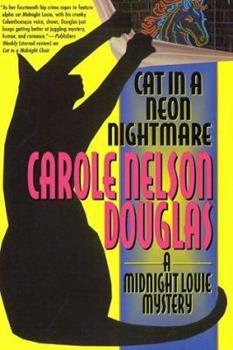 (Book #15 in the Midnight Louie Series)

"Cat in a Neon Nightmare" is the fifteenth Midnight Louie mystery, and this tough-talking tomcat is as feisty as ever, raising hell (sometimes literally) in Las Vegas, America's Sin Capital. The lavish hotels and the sham of wholesome fun may soothe the tourists, but sex and greed still fuel this town, and bad guys still abound. And Midnight Louie, the feline Sam Spade has his paws full keeping those he loves safe.This time Midnight Louie treads the...

Published by Thriftbooks.com User , 11 years ago
One of a series of great books featuring a cat sleuth. Lots of fun to read.

Midnight Louie does it again!

Published by Thriftbooks.com User , 13 years ago
He is one cool cat! Midnight Louie would be welcome in my home anyday along with his dear Mum, Ma Barker and sister, Midnight Louise, oh and we can't forget his sweet papa (now retired). A truly delightful read which keeps you looking for the next book in this great series.

Fabulous characters and humor! Can't wait for the next!

Published by Thriftbooks.com User , 17 years ago
I've just finished this one, and each book in the MidnightLouie series becomes more exciting! I love the Big Cats and the addition of Louie's mother. I see the love interests of the main characters becoming more confused, complex and even more interesting. I enjoy the characters immensely and feel that I know Temple, Matt, Max and even Molina. I can't wait for the next book to come out in paperback to find out what happens to all of them next. I've loved this series from the beginning because of the continuing character growth as well as the humor. And the zany Las Vegas background has evolved along with the main characters. The author spoke recently at my local library, so I asked how come books I love, like this one, sometimes get such negative reviews online. She said sometimes a book's content will hit too close to home and really push a reader's buttons; at least that's what she's found with completely negative reactions. When I showed her a review on this book that was so opposite my reaction, she also said that people's opinions are just that, and they can't be argued with.But she also was pretty puzzled that someone complained she'd labeled the character of Max as a "lone wolf" so many times it was to the point of nausea. So she did a word search for the phrase after she flew back home and emailed me the results: Max is called a lone wolf in only one of the 16 books: this last one, Cat in a Neon Nightmare. She only found that the phrase lone wolf used twice in earlier books, once by the cat detective, Midnight Louie, contrasting feline and canine behavior, and once as a metaphor for a motorcycle that plays a role in the series. Amazing, some people aren't really seeing what's in the books, they're reacting to what they think they see. In fact, their comments can be downright wrong in terms of fact as well as opinion. So my advice is to read these books for yourself and make up your own minds. And write your own review if you don't agree with with what's posted!

THE BEST YET! AWESOME

Published by Thriftbooks.com User , 18 years ago
I just discovered this series a couple books back, but I went back and read all the previous books (tip: there's an interior alphabet in the titles after the first two books). What a trip! This is unlike any mysteries series I've read, more like a long-running TV series where the characterization just gets richer along with the plot complications. Of course there's the addictive voice of Midnight Louie, the hard-boiled cat PI, coming and going between the adventures of the four main human characters. Louie is "just a cat" to the human characters, so it's only the reader who knows what he's really up to and how he helps them solve crimes. He's all cat and yet also a very funny send-up of PI cliches. The Las Vegas background provides even more larger-than-life opportunities for poking fun at human (and feline) follies.The four humans include two professional crimefighters and two amateur, so the action can be satirical and amusing . . . or darker and thought-provoking. While there are traditional murders to solve in the books, the sequence is as messy as in real life, with some crimes going unsolved as an underlying conspiracy is slowly revealed. I found in reading the series in one go that the earlier books had little clues sprinkled throughout that became significant later, so I really recommend starting with Catnap and Pussyfoot. The books even get thicker as the story gets richer and more intricate, and rereadings reveal even more of the fine points. I love series that create a universe you can get lost in, that always feels bigger than the book you're reading right now. This book surprised me though, with sudden plot twists that totally turned my expectations (and some of the characters') upside down. The edgy relationship of the humans (two men and two women, all interesting. . . and they DON'T all have abuse issues) really drives this series. Romance is a factor, but so is rivalry. This series is unique for being wildly amusing, suspenseful, and thought-provoking all at the same time. I can't wait for the next installment, and hope the author invents a way to extend the alphabet!

Published by Thriftbooks.com User , 18 years ago
Las Vegas public relations expert Temple Barr has been involved in several recent homicide investigations. Helping her besides her feline bodyguard Louie is her lover Max Kinsella (a magician and part-time counter terrorist operative) and ex-priest Matthew Devine. Matt has also been stalked and threatened by Kathleen O'Connor an IRA agent, who wants his virginity in exchange for leaving him and the females in his life alone. Max, who was once Kathleen's lover, and Lt. Carman Molina of the Las Vegas Police Department tell him to have sex with a high priced call girl so that he wouldn't be of any value to his stalker anymore.He takes their advice and when he leaves the room, the hooker was very much alive. When Molina sees her she is dead and she knows Matt is the last person to see her alive. Molina suffers a crisis of conscience because she has to think of him as a suspect even though she doesn't want her personal life to spill over into her professional one. Meanwhile Max is busy infiltrating the Synth, a cabal of magicians who might be responsible for the murder attempts on him, Matt and Temple. Midnight Louie saves Max's life from an old enemy with a long grudge.Temple Barr, who is usually center stage in the Midnight Louis novels, plays a secondary role in CAT IN A NEON NIGHTMARE. The spotlight shines on Max who must come to terms with his own feelings of guilt. Midnight Louis is the true hero of this tale as he saves a life and guards the two men who are an integral part of his human's life. This book is the cat's meow.Harriet Klausner
Copyright © 2020 Thriftbooks.com Terms of Use | Privacy Policy | Do Not Sell My Personal Information | Accessibility Statement
ThriftBooks® and the ThriftBooks® logo are registered trademarks of Thrift Books Global, LLC