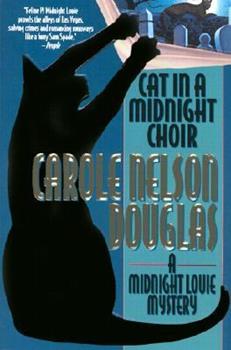 Cat in a Midnight Choir: A Midnight Louie Mystery

(Book #14 in the Midnight Louie Series)

In Cat in a Midnight Choir , the fourteenth Midnight Louie Mystery, both feline and human evil-doers and crime-solvers work overtime to make Las Vegas the Capital of Noir Suspense. This time our feisty black cat detective is hunting a mysterious and possibly murderous organization of renegade magicians called the Synth, which has been making Las Vegas too hot to hold for some of Louie's human friends, particularly ex-magician Max Kinsella. Louie's...

Another Exciting Chapter in the Midnight Louie Series

Published by Thriftbooks.com User , 18 years ago
And believe me, it is only a "chapter." But what a chapter!It's certainly possible to read these books out of sequence and enjoy them on individual merits, but reading them as a big, 27-chapter Uber-Novel is absolutely the way to go! "Cat in a Midnight Choir" probably doesn't stand very well on its own as a single book, as there's no core to it that exists in this book alone, but as a chapter in the overall Uber-Novel, it's positively an edge-of-your-seat thriller. The bodies are all leftover from previous books (the "Stripper Killer," the mystery of the murdered professor); the mystery, likewise, is a continuation of the Big Story with loads of new information and only one loose end wrapup. But the life, joys, and definite pains of Louie, Temple, Max, Matt, and C.R. Molina are truly starting to get harsh and gritty, now. We've met them, we know their back stories now (with perhaps a few holes here and there), and we're hurtling toward their future and possibly, possibly, some resolution for their lives. Whoever one roots for (Max or Matt?), or believes (Molina or Max?), or worries about, one can always count on Midnight Louie for clear-headed cat-logic and dauntless determination to keep his "little doll," Miss Temple Barr, out of trouble. With his cat-eyed views and hilarious malaprops (well, he IS a cat, he can't be expected to be a Rhodes scholar), Midnight Louie always sets a terrific pace. It's very hard to stop reading these books once started.I'm so glad that Carole Nelson Douglas is an amazingly prolific writer. I'm eager to dive into "Cat in a Neon Nightmare" and can't wait for letters O - Z. Yes, indeed, this is one series of novels (chapters) that won't be a chore to re-read time and again as I wait for each new chapter to come out, because the real mystery is how she's managed to make me care so much for these desert-dwelling folks and our Runyonesque cat-hero.(One note: I'm not sure why, but Matt Devine works for WICC radio -- stations West of the Mississippi start with a "K"; Eastern stations have the "W" designation. It's bothered me since Matt took the radio job, back a few "chapters.")Not all the chapters have been 5-star winners -- but I have to admit a fondness for these ones that give us so much important information for the overall story arc. Keep 'em coming, Miss Carole!

I'm a sucker for Louie

Published by Thriftbooks.com User , 18 years ago
I absolutely love this tough talking sleek black furry detective - who is beginning to admit his own limitations and rely on his alleged daughter, Midnight Louise, to help him ferret out clues - and then hope that his roommate, Temple Barr, can decode them. I can't really say it's all too human - but Louie has a self-awareness that is enchanting. He is not gaggingly cute - there is nothing cute about him. He's tough, cynical, wise-cracking and often guilty of enchantingly funny malapropisms. He is his own man - errr - his own cat. But he does take his responsibilities to his human friends seriously.It may help those readers who like things neat to read the earlier books first. This is one of those alphabetical series of books, each one building on the previous one and referring to things that occurred in earlier books. However, I started with K - "Cat in a Kiwi Con" and didn't feel as if I was missing anything that would interfere with my enjoyment of the book. In fact, I enjoyed that one so much that I hunted down all the rest and then read them - out of order, at first, but eventually from first to last.Because the books are somewhat open-ended - the whodunit it being less important than the characters and their dilemmas - I find that I can even reread these books - not a usual thing with a mystery. And it is also because of that focus more on characters and relationships that I believe any one volume can stand alone as a good read.In this volume, a lot of earlier threads really do start to come together. If you need closure, this episode will help to get you there. If you enjoy character development, human foibles as well as those feline, and a good story that will at times leave you in suspense and at other times laughing aloud - you will love this and all of the Midnight Louie Books. I am sorry the alphabet is finite, knowing that we are already half way through the alphabetical series.

A Refreshing Alternative to Koko and Yum Yum

Published by Thriftbooks.com User , 19 years ago
I've been a fan of Lilian Jackson Braun's "The Cat Who" series for quite a while, but the series is coming to a close and the quality has been a decline. So I was pleased to find within the past year Miss Carol Nelson Douglas' Midnight Louie mysteries.This edition of the series has some of everything. There's mystery, intrigue, suspense, humor and so much more. One of the really neat things is how the story explores such personal aspects of the characters, from a priest trapped in a situation where he must sacrifice his own personal values to save those dear to him, to a public relations woman going undercover despite the danger of a "stripper killer."To add to all of that, there's Midnight Louie and his saucy daughter Midnight Louise (not that he would ever admit to her parentage personally.) Much of the story is written by Midnight Louie himself, from his perspective and while this may sound cheesy, Midnight Louie is one heck of a writer, perhaps even better than Mrs. Douglas herself.

Published by Thriftbooks.com User , 19 years ago
Midnight Louie, a black cat and private detective, intends to help his 'roommate' find the killers who have littered Las Vegas with their victims. With the sometimes doubtful assistance of his 'daughter,' and with support from the big cats who work with a Vegas magician, Louie manages to track down some clues--but will Temple Barr and her erstwhile lover Max Kinsella be able to put them together. And in the meantime, will ex-priest Matt Devine ever make a move on Temple, or any woman. And will cop C. R. Molina get off Max's case for long enough to determine what is really happening in Vegas? Author Carole Nelson Douglas's "Cat" stories deliver a multivolume mystery with the loose ends in one story continuing on into the next. In CAT IN A MIDNIGHT CHOIR, some of the threads start to pull together. A mysterious 13th sign of the zodiac points the way at something more potent than high-school occult and the stripper-killer finally gets his come-uppance, but the deeper mysteries remain unsolved. Indeed, ex-terrorist and crazy woman Kathleen O'Connor (aka Kitty the Cutter) is more dangerous than ever in her attempts to make Matt abandon his most deeply felt beliefs. Fans of the Midnight Louie series will be overjoyed to see this addition to the corpus--and CAT IN A MIDNIGHT CHOIR is a good one, moving forward the extended plot, providing its own nuggets of mystery, and presenting lots of Carole Nelson Douglas's quips and wry insights into humanity (only sometimes as seen from the cat's eye). For those not yet exposed to the series, it might make sense to start with the earlier novels as CHOIR is very much a (superior) middle book.

Published by Thriftbooks.com User , 19 years ago
There are a lot of unsolved crimes in Las Vegas, many of them involving ex-magician Max Kinsella since some of the victims were magicians or their assistants. There is also a rash of attacks and killings of strippers, one of whom was last seen with the mysterious Max. All of the above is too much coincidence for Lieutenant Carmen Molina to dismiss. She goes undercover to try and ferret out the killer, hoping desperately that it is Max and not the father of her twelve-year-old daughter. Temple, who knows that Molina is going after the wrong man is going to do whatever it takes to protect her hunk. Temple's fearless feline Midnight Louie decides that if he wants to keep his human safe, he must be the one to guard her back. This is the fourteenth installment in the Midnight Louie series and yet the novel remains fresh and exciting like a cat with more than nine lives. Several sub-plots from other books in the series culminate in CAT IN A MIDNIGHT CHOIR but there are other threads left purposely dangling so readers will want to read the next episode in this fantastic series. Carole Nelson Douglas knows what readers want and gives it to them so they will come back for more.Harriet Klausner
Copyright © 2020 Thriftbooks.com Terms of Use | Privacy Policy | Do Not Sell My Personal Information | Accessibility Statement
ThriftBooks® and the ThriftBooks® logo are registered trademarks of Thrift Books Global, LLC