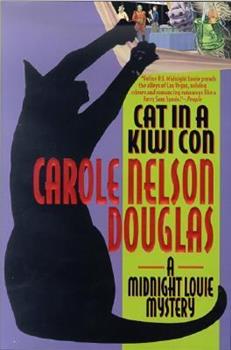 Cat in a Kiwi Con: A Midnight Louie Mystery

(Book #12 in the Midnight Louie Series)

While his human partner, public relations whiz Temple Barr, and her significant other, Max Kinsella, are bespelled by murder most magical on the Las Vegas university campus, Louie has followed the lethal and lovely Siamese Hyacinth into the worlds largest science fiction and fantasy convention, GigantiCon. When a prominent player is killed, not only is the method of death perplexing, but the suspects in this case are a very unusual cast of thousands...

Published by Thriftbooks.com User , 21 years ago
When Science Fiction writers get together, they complain about getting ripped off--even as murder runs through the convention. Carole Nelson Douglas has written another funny, quirky mystery. Again, Midnight Louie, the cat, plays the staring role. Louie, along with Temple and Max, solve the crime, but there is a bigger crime here--one left to be solved in a later book in the series. Read this one for the fun of it, not to have all the loose ends tied up.

This series and this author is great

Published by Thriftbooks.com User , 21 years ago
This year's TitaniCom, the world's largest science fiction and fantasy convention, is being held at the Las Vegas New Millennium Hotel and Casino. Mariah, daughter of police lieutenant C.R. Molina wants to attend. Former priest Matt Devine is willing to escort the young girl because he needs to get away from his troubling thoughts involving his first date with police sketch artist Janice Flanders. Also attending the convention is publicist Temple Barr's cat Midnight Louie who seeks the individuals who kidnapped and neutered him.Ex-spy and retired magician Max Kinsella gives Temple a sketch of a man he plans to watch, who is allegedly staying at the hotel. He wants Temple to locate the man for him. Always eager to help her lover, Temple visits the New Millennium where she meets Matt, Mariah, and Louie. The group stumbles upon the murdered corpse of a conventioneer, which should not surprise anyone since there is a high correlation between dead bodies and Temple. Once again, the cast seeks to solve a murder.There is no finer amateur sleuth than Midnight Louie, the feline equivalent to Spencer (or perhaps Hawk). Carole Nelson Douglas infuses humor throughout her story line, which keeps readers alternating between grinning and laughing. Told from the various perspectives of the major players, a dangerous technique for a lesser talent, the plot contains snappy insight into the thinking of several charcaters, which in turn leads to multiple surprises. Enthusiasts will realize that CAT IN A KIWI CON is one of the better works in this long running series which is filled with superb novels. With his charm and appeal still reaching out towards the reader, Midnight Louie continues to steal readers' hearts.Harriet Klausner
Copyright © 2020 Thriftbooks.com Terms of Use | Privacy Policy | Do Not Sell My Personal Information | Accessibility Statement
ThriftBooks® and the ThriftBooks® logo are registered trademarks of Thrift Books Global, LLC