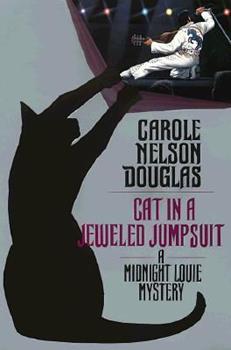 (Book #11 in the Midnight Louie Series)

Midnight Louie, returns for an eleventh outing in Carole Nelson Douglass acclaimed cozy-noir series. This time his human partner, Temple Barr, learns that the remodeling of the Crystal Phoenix Hotel is being held up by a ghost: the workmen swear its Elvis. The opening of Las Vegass first Elvis, themed attraction might explain this unscheduled appearance. But what of the death threats against the Priscilla Presley-esque daughter of Crawford Buchanan,...

Published by Thriftbooks.com User , 21 years ago
I returned home from a recent trip to Memphis, where we toured Graceland, to find "Cat in a Jeweled Jumpsuit" in the mail awaiting my arrival. The coincidence was amazing. Finished reading it last night and think it is one of the best books I have ever read. The author's thought process gets deeper with each book and her exploration of the never-ending Elvis mystique casts an accurate eye on the sociology of the 50's and 60's and the perception of those times having been so innocent. Having been a teenager in the 1950's, I could also totally relate to the Electra character. The author's use of words gets cleverer and funnier with each book. As with any "whodunit," you have to keep reading to find out who was the perp, but you finish the book with sadness because there will be no more show-stoppers on each page. Thank you, Carole, so much for Temple and Louie and Chatter and all the rest of them!

Cat in a Jeweled Jumpsuit

Published by Thriftbooks.com User , 21 years ago
Great book for Louie lovers & Elvis fans. And for those who aren't Elvis fans or too young, there's something to be learned. Another fun adventure for Louie, Temple & you.

The Cat They Call the King and the King of the Cats Rock!

Published by Thriftbooks.com User , 22 years ago
Carole Nelson Douglas' Temple Barr and Midnight Louie investigate the ups and downs of glamor and glitz when they meet Elvis?, Elvis's ghost? and a company of Elvis impersonators. I think my favorite parts were those that involved Matt and his enigmatic guest on his new call-in radio show. I found the conclusion to this particular subplot satisfying enough to put a Cheshire Cat smile on my face. Louie's snake charming techniques for interviewing anacondas worked like a--er--charm--for me. Eschewing her usual series characters' entanglements and troubles, Douglas focuses in this book on having her protagonists and even one of the antagonists pull together to solve a mystery with their usual panache, and more importantly to seek resolution for the troubled soul of the charismatic entertainer. I never liked Elvis in his heyday but I must say, after reading this book, I feel much more kindly toward him now. I also LOVED the Fontana Bros. as Full Spectrum Elvis impersonators. The only problem with this book for me is that it seems to have been too short because I keep wanting to read some more and wondering what the people are doing NOW. I'd love it if Elvis's ghost turned up now and again in later books, just to give the little lady (Carmen Molina) a hand now and then.

Published by Thriftbooks.com User , 22 years ago
It was inevitable. Who better than one legend to delve into the mystery of another legend?Thus, it is only fiting when the ghost of Elvis is spotted lurking about the Crystal Phoenix construction site that Midnight Louie himself take up the case of the mysterious apparition.It is surely no coincidence that a super new casino dedicated to the King is celebrating its opening with an Elvis impersonator contest. As a wild assortment of Elvi congregate in rehearsal, it becomes clear that someone is out to rig the competition with malice aforethought, including murder.Miss Temple Barr, pet human of Midnight Louie, is no slouch in the sleuth department either. Determined to protect the daughter of a friend participating in the pageant, she brings in the big guns -- nine Fontana brothers all dressed as the King! Meanwhile, her friend Matt, a former priest turned radio talk show host, is fielding calls purportedly from Elvis himself, sparking a bevy of newspaper headlines and much heated debate.Just what is going on? Only the anaconda knows who... And only Midnight Louie can find out why!Integrating the extraordinary power of the Elvis phenomenon into a cleverly conceived mystery, Ms. Douglas takes her artistry to a higher level as she views past and present through this uniquely American prism. The end result is as haunting in its intensity as the legend himself.Romantic Times, 4 1/2-star GoldM. Helfer

Published by Thriftbooks.com User , 22 years ago
The construction crew remodeling the Las Vegas' CrystalPhoenix Hotel refuse to continue their work because they believe theplace is haunted. Temple persuades the workers to return to the job because the ghost is only Elvis. Merle begs Temple to watch out for her daughter Quincy who is playing the part of Priscilla Presley at the Kingdome Hotel and Casino Elvis impersonation contest. The place is a shrine to Elvis. Many of the worshippers feel Priscilla is Judas and so Quincy receives some threatening experiences. Temple agrees to act as a bodyguard. However, with Louie at her side, Temple soon finds herself competing and cooperating with the FBI as two homicides occur. CAT IN A JEWELED JUMPSUIT is an excellent addition to the Midnight Louie tales. There is a vein of mysticism running throughout the story line that leaves readers wondering if Elvis is on the scene. The fascinating mystery is augmented by the glimpse inside the Elvis cult. However, the irascible Midnight Louie steals the show (as usual), leaving even a living, ghostly, or is it an impersonator Elvis to know that even the great one cannot compete with a feline animal star.
Copyright © 2020 Thriftbooks.com Terms of Use | Privacy Policy | Do Not Sell My Personal Information | Accessibility Statement
ThriftBooks® and the ThriftBooks® logo are registered trademarks of Thrift Books Global, LLC