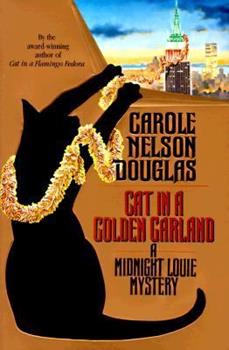 (Book #8 in the Midnight Louie Series)

MysteryLarge Print EditionYou never know what madness and mayhem youll find in Douglas mysteries, but you can be sure it will be wild, witty and utterly irresistible.San Francisco ChronicleMidnight Louie and his cohort, Temple Barr, are visiting the Madison Avenue ad agency that may make the black tomcat a star. But when the agencys head honcho forgoes his traditional Santa suit for a company party and hires an actor instead, someone puts the substitute...

Published by Thriftbooks.com User , 15 years ago
I have to admit so far, this was my favorite Midnight Louie mystery. When Santa is murdered, Louie is on the case along with persistant Miss Temple Barr, they will not rest until the case is solved. The descriptions of New York and it's beauty and hustle and bustle made me smile, remembering my trips to the big apple. Temple's Aunt Kit is a hoot! I enjoyed all the background info into the 1960's. There is a lot of action and developments in the subplots, involing Cliff Effinger, and Temple's suitors Max and Matt. I especially enjoyed Matt's holdiay trip home to Chicago to confront his family and to try and get some answers to the questions about his life growing up and his ethnic background. His Christmas opens up his mind to new possibilites. As usual, Midnight Louie is the best. You never know what he will do next! Very enjoyable and well written. Thank you, Ms. Douglas, for such good story telling. I cannot wait to read the next book!

Fantastic Who-Done-It for the Holidays

Published by Thriftbooks.com User , 17 years ago
Las Vegas advertiser, Temple Barr, and her black tomcat, Midnight Louie, are looking for a fun holiday vacation in New York City, where Temple will play stage Mother to Louie, in an attempt to land him a part as a pet star in a new commercial. In Temple's opinion, New York City is filled with lights, people, and best of all, no dead bodies. But when the boss of an ad agency dresses up as Jolly Old Saint Nick for a holiday party, Midnight Louie just knows it's a trap, and before they know it, Saint Nick is dead, and Temple and Midnight Louie are on the case. But between detective work, Louie's rival in Temple's love, Max, appears with a surprise holiday proposal, which leaves Temple breathless, and may leave Louie out in the cold.This was my first Carole Nelson Douglas novel, and I am not at all disappointed in the turn out of it. Midnight Louie is a great character, who keeps you hanging on his every word, even though he's only a cat, and leaves you wanting more. Temple, while a tiny woman, is a tough one. Her rambunctious personality keeps you turning the pages until the crime is solved, and the case is put to rest. Douglas is a fantastic author who pulls you into the story, and doesn't let you out until the very last sentence. Her frequent talk about AIDS in the novel proves that she is very socially conscious, and interested in spreading the word of being safe. A fantastic who-done-it for the holidays that all mystery fans will enjoy and relish in.Erika Sorocco

Published by Thriftbooks.com User , 22 years ago
The Midnight Louie mysteries series is a GREAT READ!!! The deiscriptions of Las Vegas ( and in this book New York) are right on the money and makes the reader long to take a trip to Las Vegas!!With each new book, the plot gets thicker, the competition between Max and Matt gets better with each new installment! Which one will Temple choose?? Midnight Louis is a cat after my own heart, and I love his point of view and devotion to his human. Congrations to Carole Nelson Douglas on a another hit book!!

Published by Thriftbooks.com User , 22 years ago
They're back, Midnight Louie, that irresistable dude about town and his favorite human, Temple Barr. This time, the duo sets out to take the Big Apple by storm as Louie auditions for the position of chief spokescat. Once again, however, they find themselves in the thick of another murder as the actor hired to play Santa Claus at the ad agency Christmas party, turns up dead. Never fear, Louie is on the case, sniffing out clues (and catnip) wherever they may be! Meanwhile, in Las Vegas. ex-priest, Matt Devine, keeps Lt. Molina's life from becoming dull as he tracks down the illusive Cliff Effinger, while Temple's other beau, Max Kinsella tries some holiday magic of his own. Douglas paints a vivid picture of her characters, both human and feline, and their relationships, while weaving a mystery that keeps the reader engrossed until the last page. Merry Christmas to all and to all a good read from Carole Nelson Douglas and Midnight Louie!

Published by Thriftbooks.com User , 24 years ago
Las Vegas publicist Temple Barr sheds her professional persona to become the doting stage mother to her feline companion, the audacious Midnight Louie. Madison Avenue gurus are thinking of using Louie as a spokes-cat for a feline product. Temple, believing that her "Baby" needs his chance to shine, accompanies him to New York where they stay at her aunt's place. Wherever Temple goes, a corpse will follow. During a Christmas party given by the owners of the advertising agency, Santa Claus chokes to death while performing. At first, everyone thinks that the president of the company died, but soon it is realized that the deceased is someone else. The incident seems too freaky to be an accident so Temple and Louie will not rest until they know for sure. NYC, seen through the eyes of Temple and Louie, is a humorous and ingenious experience that almost seems absurd. Carole Nelson Douglas provides lovable Louie with several believable anthropomorphic traits that makes him seem like a feline with a human brain inside. CAT IN A GOLDEN GARLAND has a very complex sub-plot involving one of the heroine's erstwhile suitors, allowing readers a chance to understand what drives him yet holds him back from committing to his beloved. This entire series is unique and refreshing and highly recommended for someone who enjoys a different type of mystery. Harriet Klausner
Copyright © 2020 Thriftbooks.com Terms of Use | Privacy Policy | Do Not Sell My Personal Information | Accessibility Statement
ThriftBooks® and the ThriftBooks® logo are registered trademarks of Thrift Books Global, LLC