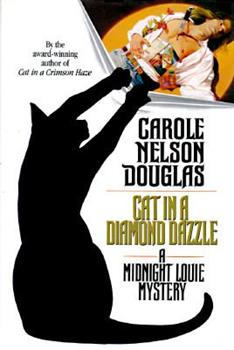 Cat in a Diamond Dazzle: A Midnight Louie Mystery

(Book #5 in the Midnight Louie Series)

This description may be from another edition of this product. Midnight Louie is back!...along with the human the black tomcat condescends to spend his days with: Temple Barr, a redheaded publicist whose love for expensive shoes is matched only by her affinity...

Published by Thriftbooks.com User , 18 years ago
At least that's the most PR whiz Temple Barr thinks she's hunting when this story begins - a hidden pair of Stuart Weitzman shoes adorned with a black cat - the spitting image of Midnight Louie - done in Austrian crystals. If she can find the shoe, which has been hidden somewhere on the Vegas strip, she gets a pair of her very own. And who better to win twin portraits of Louie that will also raise her diminutive stature 3" or so than Temple? After all, the big black cat has brought a lot of excitement into Temple's life since he claimed her at a bookseller's conference - was it only a few short weeks ago?And that's all Temple as in mind for the week - other than attending a Romance Writer's convention at the Crystal Pheonix with landlady Electra Lark. Things are a wee bit tense back at the Circle Ritz - and so the convention is a form of escape.And all Louie has in mind is a bit of dalliance with his lady love - the Divine Yvette, a tiny silver shaded Persian with blue green eyes who has captivated is heart. Yvette will be there for the whole convention, because her mistress - airhead actress Savannah Ashleigh - is in town to give out the last night awards. And the most popular awards category? Not the romance novels themselves, but something more action-packed - the Incredible Hunk contest, with competitors including the popular favorite, Fabrizio, and an old friend from Pussyfoot, Cheyenne. But all too soon, death rears its head. Cheyenne makes an entrance even more dramatic than he planned to, when he enters the stage on a beautiful horse, sporting a small loincloth, a pouch of glittery crystals in a pouch around his neck and not much else - except an arrow protruding from his back. The thing to keep in mind in this book is that all that glitters is not necessarily Austrian crystals. There is a lot of glitter in this gathering of the romance industry - and some dross as well. And so most thoughts of leisure depart, and Midnight Louie and Temple are at it again. (Not that Temple gives up her shoe quest, nor will Louie forego his reunions with Yvette - but they are still hot on the trail of Cheyenne's murderer.)To complicate life a bit more, Temple's mystery man, Max Kinsella is back in town - and he and Temple's other romantic interest, Matt Devine, face each other warily. Temple has even seen the two of them haunting the Crystal Pheonix - together but not looking especially friendly.Temple manages to pick up the odd clue by interviewing cast and crew and even while shoe-hunting - but gets the major key to things while taking part in a "pose down" - an onstage tableau like those seen on the typical bodice-ripper style of romance. And Louie - well, Louie will always be where Yvette may be - and that's usually backstage. Unnoticed - the advantage of being short and black - he's in a position to hear and see what escapes most two legged detectives, and excellent at communicating his finds to both Temple and the authorities.Will Matt and Max

Published by Thriftbooks.com User , 21 years ago
This book was simply fun to read.

Published by Thriftbooks.com User , 21 years ago
The title in this one is extremely apropos, as the dialogue sparkles and flashes without getting cutesy or self-concious. A large number of sly little asides add to the humor; I frequently found myself laughing at a bit of dialogue, or at Temple's internal thought proccesses. Louie himself is an elegant Greek chorus of one, while behaving at all times like a real live cat. Matt and Max are superb foils for each other in all aspects, and the supporting characters (Fontana Inc, Danny Dove) are delightful while avoiding two-dimensionality. All of her books give a quick, in-depth sketch of life in the real world of various trades or professions...people wanting to become published authors could do worse than to read this particular one.

Published by Thriftbooks.com User , 22 years ago
With the return of her ex-lover, magician Max Kinsella to the Circle Ritz, home of her new beau, Matt Devine, ex-priest and hotline counselor, Temple Barr finds herself in need of a refuge. Accompanied by the colorful Electra Lark and Temple's aunt, romance novelist, Kit Carlson, Temple attends a romance writers convention at the Crylstal Phoenix. However, Temple once again finds herself embroiled in murder as entries in the Incredible Hunk contest begin turning up dead. That ever reliable feline, Midnight Louie springs to the assistance of his favorite roommmate as they work to uncover clues to the identity of the killer. Louie must contend with his spitfire daughter, Midnight Louise, who has little use for ther father, while Temple faces Lt. Carmen Molina who not only searches for the killer of the hunks, but continues her search for the elusive Kinsella, a suspect in yet another murder. All the while, Temple searches for the Midnight Louie shoe which promises its own reward for the high heeled heroin. With each novel, Douglas draws us further into the lives of her charachers and weaves internal mysteries that carry through from book to book. We await the next book to find out more about Matt Devine, Max Kinsella, and the rest of the human characters as well as Louie's romantic and family entanglements.

every woman's guilty fantasy of 2 men & a lovable tomcat

Published by Thriftbooks.com User , 23 years ago
A satisfying excursion in the "Midnight Louie" series, Douglas plays with a secret fantasy women sometimes have of being caught between two attractive (and mysterious) men, with a faithful tomcat for company. While the setting of a romance convention seems a bit similar to earlier plots, adding the subplots of the heroine's two suitors, a long-lost aunt, and the madcap search through Las Vegas for a pair of diamond-studded cat shoes livens the background. Even the mystery at the romance convention features some fascinating background tidbits about the industry, and a truly hissable villian. Another solid outing for the feline Sam Spade and his petite owner!
Copyright © 2020 Thriftbooks.com Terms of Use | Privacy Policy | Do Not Sell My Personal Information | Accessibility Statement
ThriftBooks® and the ThriftBooks® logo are registered trademarks of Thrift Books Global, LLC