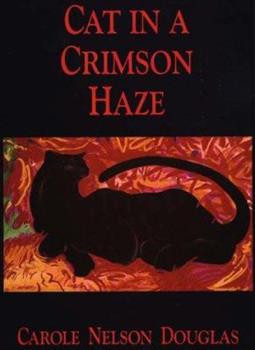 (Book #4 in the Midnight Louie Series)

This description may be from another edition of this product. Midnight Louie, the best tomcat in the crime-solving business, and his human partner, petite redheaded publicist Temple Barr, are once again in the thick of things in the city of sin. The manager of...

Cat in a Crimson Haze

Published by Thriftbooks.com User , 14 years ago
I enjoy all of the Midnight Louie mysteries. I love cats and if you do too, you will definitely like these books. Makes you wonder what our cats really do on their own time!

Louie is a star!

Published by Thriftbooks.com User , 18 years ago
Petite PR pro Temple Barr is chagrined when she fails to get her annual invite to submit skits for Las Vegas' annual Gridiron show - and not much happier when she gets a grudging request from the sleazy Crawford Buchanan for some help with the finale. But she can't resist - fabulous show stopping skits are her special forte. And she comes up with a winner.But soon after her script is submitted, strange and threatening things start happening, including a boobytrapped stair rail that sends Temple and her signature high, high heels hurtling down a flight of steps. As the new PR person for the Crystal Phoenix Hotel, in charge of transforming the place into a casino that reflects family values (a tough assignment for Vegas!) this earns her a phalanx of fabulous Fontana brothers as bodyguards, much to her chagrin. There are at least nine Fontanas, all large and given to picking up petite Temple, who is not only sensitive about her tiny stature but accustomed to operating on her own - with a big assist from Louie. But Louie is also an independent operator and rarely interferes with Temple's routine. The Fontanas - who are a united family personified - overhelm. (But entertainingly.)Meanwhile, neighbor Matt Devine sets off in search of his stepfather, Cliff Effinger - but he gets a late start. Before the PI he hires can give him his first clue, the body of Effinger falls onto a blackjack table from the casino ceiling. Soon Matt is under suspicion by Lieutenant CR Molina - who is also unhappy that Temple and Devine have discovered her alternate identity as the sultry cafe singer, Carmen. Biggest problem - Matt is asked to identify the body and can't. He hasn't seen Effinger since the guy deserted Matt and his mother many years before - and time and the netural changes that death wreaks have rendered him not quite recognizable.Matt wanted the satisfaction of getting some kind of revenge on the cruel stepfather - and instead may be in trouble without having the chance to act.Suspicions of mob activity abound, especially given the content of Temple's skit, which alludes to the former dominance of the Mafia in Vegas history. But the show must go and - and does, despite a giant heist at the casino down the street that draws any police protection away from the show's arena.But leave it to Midnight Louie - largely absent from Temple's apartment these days since he is avoiding the petite Caviar, who claims that her true name is Midnight Louise and that she is sworn to get revenge on her dear old dad who deserted her at birth. (Shades of Matt Devine - although Louie has wisely kept his name from his alleged offspring so far.) Louie has been hanging around the periphery of the Crystal Pheonix keeping an eye out for his dear roommate. On a tour of the dressing rooms he finds a mysterious hidden door that leads to a set of tunnels that suddenly make the dangerous doings that have surrounded the show so far quite clear. Louie manages to lure Temple to the tunnels desp
Copyright © 2020 Thriftbooks.com Terms of Use | Privacy Policy | Do Not Sell My Personal Information | Accessibility Statement
ThriftBooks® and the ThriftBooks® logo are registered trademarks of Thrift Books Global, LLC