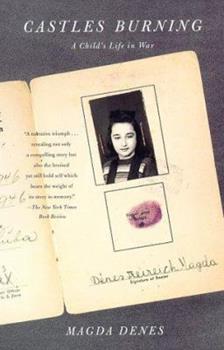 This unsparing portrait of a childhood in 1939 Hungary--told in the voice of a brave and unforgettable nine-year-old Jewish girl--is the best sort of memoir, revealing not only a compelling story, but also the bruised yet still bold self which bears the weight of its story in memory (The New York Times Book Review).

Published by Thriftbooks.com User , 17 years ago
This is one of the most moving accounts of that time that I have ever read. I admire the courage of the writer to recount it, I admire the fierceness of that little girl, so many years ago. Its haunting beauty stays with me.

Published by Thriftbooks.com User , 19 years ago
Magda's story grips you from the start - full of horrifyingly vivid memories told in a straightforward fashion, it examines several years of a Hungarian child's life during and after WWII. Her relationship with her brother and cousin is so intense that your heart will ache for all three children. At the book's conclusion, although you know that Magda will be okay (obviously, if she wrote the autobiography later) but you itch to find out more about this incredibly resillient, intelligent young lady.

Published by Thriftbooks.com User , 22 years ago
Dr.Denes accurately and vividly describes almost identical experiences that I had during the first half of the 1940s. Of course, I can not vouch for the accuracy of her conversations and interactions within her own family but as far as the historical events are concerned nobody should have doubts that if anything,due to her wonderful sense of humor, they were understated. I always wanted my children to know and understand what happened during those terrible times.Unfortunately, I do not have Dr.Denese's gift of writing so as a substitute I ordered five volumes of her book to give one to each of my children and my brother's children.Let nobody question the enormity and cruelty and the validity of the events described in this book.They all happened.

Published by Thriftbooks.com User , 22 years ago
I write from Budapest, the scene of much of Castles Burning. The reviewer who thinks the book cannot be accurae is entirely wrong. I have researched the places and dates mentioned by Magda Denes and have organised a school tour around such places. You can even find a plaque with her brother's name, Ivan Denes, in Vadasz utca. This is an outstanding book! Tragic, gripping, moving, even humorous at times, and a true picture of an awful time. I'll write more. Meanwhile email me if you, too, are a fan of Castles Burning (and even if you are not).

A superbright girl's view of the collapsing world in 1944-45

Published by Thriftbooks.com User , 24 years ago
Having lived through the same period under somewhat different, but equally harsh circumstances as an even younger child than Magda, I would like to endorse this book as a no non-sense, objective, factual and sober view of a child's world caving in on her during the years of the persecution of the Jews in Hungary, culminating in the final months of the terror. Magda Denes produced a book that needs to be read preferably in one session to sense the continuity of the story and the imperfections of the grownups under such great stress. A wonderful but scary work for people with sentimental hearts and minds!
Trustpilot
Copyright © 2022 Thriftbooks.com Terms of Use | Privacy Policy | Do Not Sell or Share My Personal Information | Accessibility Statement
ThriftBooks® and the ThriftBooks® logo are registered trademarks of Thrift Books Global, LLC