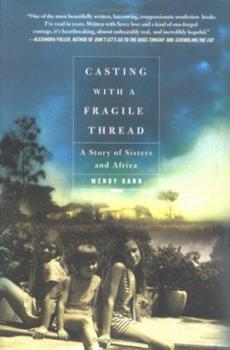 Casting with a Fragile Thread: A Story of Sisters and Africa

In this poignant, lyric memoir, a sister's tragic death prompts a woman's unbidden journey into her turbulent African past A comfortable suburban housewife with three children living in Connecticut, Wendy Kann thought she had put her volatile childhood in colonial Rhodesia - now Zimbabwe - behind her. Then one Sunday morning came a terrible phone call: her youngest sister, Lauren, had been killed on a lonely road in Zambia. Suddenly unable to ignore...

Published by Thriftbooks.com User , 15 years ago
Wendy Kann's personal and political history in "Casting with a fragile thread" is riveting, wise and timeless. It is a gripping memoir about a woman who has risen above her traumatic childhood and turned her pain into compassion and healing. Born in colonial Rhodesia--now Zimbabwe--Kann grew up during the country's 13-year civil war. She experienced the first elections in Zimbabwe in 1980 and lived in Hong Kong when the British officials handed the city over to the Chinese in 1997. She said both experiences were nagging reminders that the laws, police, media, army and government can bring bewildering uncertainty to a safe, predictable orderly world. She writes poetically about her environment--how the lawns in America's neighborhoods simply roll trustingly one into the next, without the rude division of fences and gates. Having spent my early years in South Africa I too had my "mind revolt against the terrifying avalanche of choice" and tried to figure what "American" was and how I could be "just that." Kann's observation years later about Rhodesia's civil war is a warning to all countries. She said, "No one in my generation recognized that we were fighting a war to preserve an unsustainable way of life." Her quote reminded me of America. We have the technology for alternative fuel yet we remain in a war in the Middle East because of an addiction to oil, a non-renewable resource.

An incredible journey within the pages of this book

Published by Thriftbooks.com User , 16 years ago
Kann shares her honest emotions so perfectly that I was unable to put the book down. The description of physical terrain and emotional environment are captured with a lovely balance that allows one to truly picture Wendy Kann's life. You will bond with the writer. She has come to us from such an exotic and imperfect world and her story is the discovery of purpose with feelings. This book has the quality, depth and interest to definitely be a top seller. I could imagine it has a fit in Oprah's book club....

Published by Thriftbooks.com User , 16 years ago
I didn't really know what to expect when I first picked this book up on the recommendation from a friend but soon found I was unable to put it down. It is humbling to see how people can be brought up under such adversity and come through it. I loved the author's style which was easy to read despite some harrowing scenes. The book is based on the author's own experiences and captures the political events that surrounded the period. It does not come across as self serving but instead as a journal of events across the globe. Despite this being based on true occurences, her style would readily translate to further books. Well worth the read!

Published by Thriftbooks.com User , 16 years ago
This book is stunning! I loved every page and every word. The author has an amazing story to tell and a talent equivalent to her story's richness. I cried and laughed and cried again as the three sisters faced unfathomable hardship in a setting of colonial privilege. Ms. Kann paints a poignant picture of the Africa we think we know, and its dark underside of racism and family dysfunction.

Published by Thriftbooks.com User , 16 years ago
There is something very beautiful in the style of the author. She touches deep inside while sharing her heartache from the death of her sister. She also teaches you a lot about a region in Africa and the attitude of the colonialists who live there. Her first impressions of America are told in a very humourous way. The book has something for everyone.
Trustpilot
Copyright © 2022 Thriftbooks.com Terms of Use | Privacy Policy | Do Not Sell My Personal Information | Accessibility Statement
ThriftBooks® and the ThriftBooks® logo are registered trademarks of Thrift Books Global, LLC